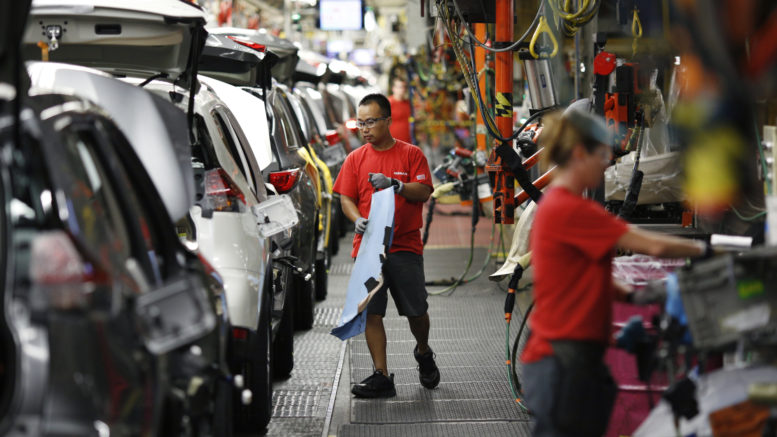 Greetings from the Burgh, where Payday is finally coming up for air after spending much of the week focused on a major investigation.

Help Us Pay for Our Stay in Birmingham

While Payday reporter Alexander Richley is on the ground in Birmingham reporting, I am getting ready to ship out next week and go down to Birmingham with camera operator Pete Callahan.

With the end of the mail-in election period a little over a week away, we are looking to rent a house for COVID-related reasons and will likely need $600 to $700 to afford a place for the week.

Donate today to help us afford a place to stay.

Remember, the best way to support us is to sign up as one or more than 574 recurring donors today.

Thank you to all our supporters who have helped us cover this historic election. Thank you for keeping the donations coming.

Union fever may be spreading throughout the South.

At the Nissan plant in Smyrna, 25 miles outside of Nashville, a group of 87 tool and die machine technicians are seeking to unionize with the Machinists Union.

“A union contract will ensure fair wages, benefits, working conditions and the ability to retire with dignity,” said Tim Wright, a machinists union Grand Lodge representative and lead campaign organizer, in a statement announcing the drive.

If successful, they would be the first Nissan workers to organize in the US.

A union victory in Smyrna could open the door to more union organizing at Nissan’s two plants in Tennessee as well as their non-union plant in Canton, Mississippi, where the union was defeated in 2017.

(See Payday & franknews’  recent interview with Nissan worker Morris Mock on the defeat of the union drive in Mississippi in 2017.)

In St. Louis, 25 members of Teamsters Local 618 are on strike at Valvoline over plans that would require workers to pay up to $7,000 in health care deductibles every year.

“This is the largest increase ever imposed for a deductible through their health insurance,” Teamster Local 618 Principal Officer Derek Kropp told St. Louis’ Labor Tribune. “We have families with kids that never reach $7,000 a year in healthcare expenses. The deductible is outrageous.”

For more, head to the Labor Tribune.

A new exposé reveals that during the largest COVID outbreak in Fresno, when at least 22 Foster Farms workers were hospitalized, local Fresno health officials tipped off Foster Farms that state officials were coming to inspect the plant. From the Fresno Bee:

Dozens of emails obtained by The Fresno Bee through a Public Records Act request show that during the outbreak at the South Cherry Avenue plant that infected hundreds, health officials tipped off company executives about a Cal/OSHA inspection, coordinated media talking points during the crisis, withheld information from the public and issued no corrective actions.

At least five people who worked at the South Cherry Avenue plant have died in connection to the virus, according to data provided by the company and Cal/OSHA. At least 22 people who worked at Foster Farms’ Fresno facilities have been hospitalized due to COVID-19 related complications to date.

For more, go to the Fresno Bee.

My friend Dave Jamieson, a veteran HuffPost labor reporter, just got back from Bessemer with a dispatch on the intensity of union organizing efforts there:

“Every gate is really important. It’s how you start organizing,” said José Aguilar, a union representative stationed at an entrance one day last week.

Aguilar, 48, was working the evening shift as the sun set and the temperature hung near 70 degrees ― the most pleasant weather he could ask for while standing on a sidewalk for a few hours. He held a union sign and waved as a worker leaving the parking lot pulled up to the traffic light, headed home. Aguilar’s colleagues stood at two other spots down the road.

He tried to explain why he’s stood at the entrances since the fall, sometimes for 10 consecutive days.

“If [workers] stop and have questions, we answer the questions,” Aguilar said. “If they come and we left, and they don’t see nobody, they’re gonna say, ‘They don’t care.’”

Donate to our fundraising so we can book our stay down in Alabama next week.

Remember, the best way to support us is to sign up as one of more than 574 recurring donors today.