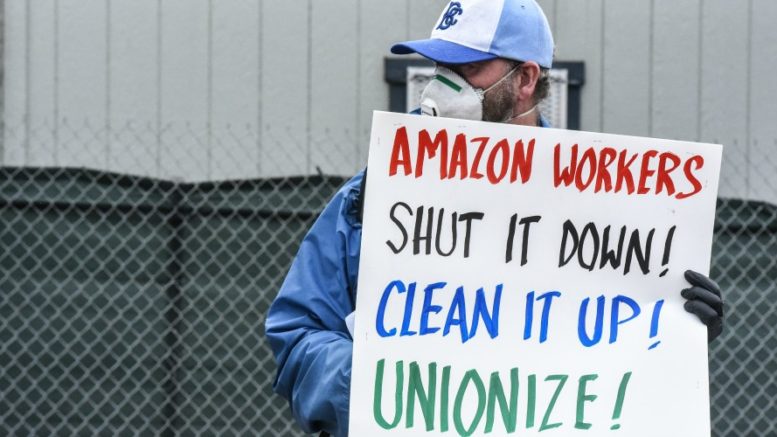 As the historic union election at Amazon in Alabama heats up, Amazon is pulling all the tricks to stop the union.

In violation of Amazon’s social distancing policy, Amazon has forced workers to attend anti-union meetings and sent workers constant text messages daily, hinting that a union could possibly lead to the warehouse closing. Amazon has even gotten the local authorities to shorten the time of stoplights outside of the plant so that union organizers can’t hand out pro-union literature to workers passing in their cars.

Now, Amazon is doing something that labor observers have never seen before in a union election; they are offering $2,000 “resignation bonuses” to quit.

Some Amazon workers, who dislike their job at the warehouse, may find the bonuses a tempting bridge to quit their job and seek something better. Workers are even being told that if they quit now that they could regain their jobs later after the union election.

However, if workers quit now, they won’t be eligible to vote in the ongoing union election.  In the meantime, many labor observers expect that Amazon will seek to hire replacements that will vote solidly anti-union.

“That should be illegal, how can you pay someone to resign,” says 48-year-old Black Amazon worker Jennifer Bates  “They are going all the way, they are pulling out all the stops”.

Under federal labor law, the bonuses could be considered a bribe and could lead to the union election being thrown out. Employers are strictly forbidden from improving the material conditions of workers in the lead up to elections and the “resignation bonuses” could be grounds for the union to petition the National Labor Relations Board (NLRB) to order a new union election if RWDSU loses this round.

“The NLRB routinely finds violations for ‘conferring benefits’ to induce employees not to vote for a union during the “critical period” between the time the election petition is filed and the election is held,” says University of Wyoming Labor Law Professor Mike Duff, a former prosecutor for the National Labor Relations Board (NLRB).

However, the bonuses could backfire on Amazon. Some union supporters have used the offer of the bonuses to argue that Amazon could easily afford to pay workers more if the company desired to.

“If you know that they need it, why don’t you give it to them anyway as a bonus,” adds Bates.

Union organizers are nervous, but despite the intimidation and anti-union tactics, they aren’t deterred in their fight to unionize.

Clarification: Amazon periodically gives out “resignation bonuses” when trying to reduce their workforce following a peak season, but had never given out such bonuses in Alabama prior to the union election; leading many to view the bonuses as suspicious.

Be the first to comment on "Amazon Offers $2,000 “Resignation Bonuses” to Bust Union Drive in Alabama"