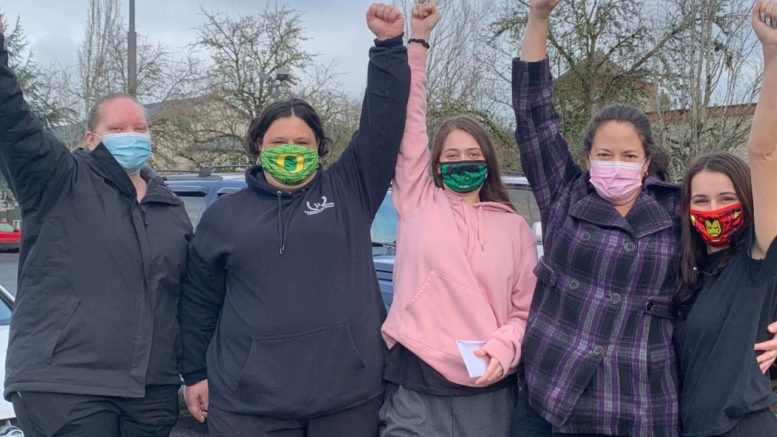 Greetings from the Burgh, where we are getting back in the swing of things after taking some time off to mourn our beloved dog Mickey Elk.

Exciting news, so far we have raised $3,338 to cover the union vote at Amazon in Alabama. We are searching for story ideas so please send them to me [email protected].

Donate today to help us cover this crucial battle.

Remember, the best way to support Payday Report is to sign up as a recurring donor today.

As the month comes to a close, we’re hoping to reach 575 recurring donors, and we’re 8 away. Sign up as one today

In December, 48 patients at The Rawlin at Riverbend Memory Care tested positive for COVID-19 and six died from the virus.

Now workers are unionizing at the facility. However, so far, the company has refused to recognize the union, which has led workers to go on strike.

“For too long, too many second chances have been given, especially to management and the administration,” said Hermes Ochoa, a lead care partner told KVAL.

For more, check out KVAL.

Workers at SFM Janitorial Services say they are routinely exposed to dangerous chemicals for inferior pay. When they raised their concerns, they said they often faced retaliation from the higher-ups.

“At a meeting they told us, ‘Don’t bite the hand that feeds you,’ ” Elsa Romero told New Miami Times.

Now, they have gone on strike seeking union recognition.

For more, check out the Miami New Times.

On the last day of the Trump administration, the ICE Union signed a labor deal that many feared would effectively hamstring the ability of the Biden Administration to change immigration policy.

Now, the Biden Administration has decided to cancel the contract altogether.

“As part of routine process and provided for by statute, the Department conducted a review of the terms of the agreement and determined that it was not negotiated in the interest of DHS and has been disapproved because it is not in accordance with applicable law,” a DHS spokesperson told CBS News.

For more, head to CBS News.

Over at the Guardian, our friend Michael Sainato investigates plummeting wages for most gig company workers following the passage of Prop 22:

“It’s clear that as soon as Prop 22 passed, it was open season to start cutting my pay again,” said Peter Young, a rideshare driver for four years in Los Angeles. “I’m looking for other work. I can’t keep doing this at this pay. I’m doing food delivery right now. Everyone is ordering food online so there’s demand. It’s just that what they are choosing to pay me isn’t reliable any more and it’s getting lower.”

When the coronavirus pandemic started, Young switched from rideshare driving to relying on food delivery apps such as Uber Eats, Grubhub, and the Uber-owned Postmates. After Prop 22 passed, he claimed incentives offered to drivers ahead of the Prop 22 vote disappeared, and he has experienced cuts to his base pay amid unreliable fluctuations.

“If you try to earn money, just purely on the delivery fee, it comes out to about $5 an hour. A good day for me is maybe earning $100 before gas and expenses off eight hours of work,” said Young.

For more, head to the Guardian.

Finally, Payday Report mourns the loss of activist Phyllis Lawrence, mother of Payday subscriber and labor activist Joe Lawrence. Phyllis passed away just eight days shy of her 95th birthday. An obituary posted on Legacy.com has a look at her remarkable life:

She graduated from Grinnell College in 1948 and returned to Davenport. She worked as a welfare caseworker for what is now the Scott County (Iowa) Human Services Department. Her interest in labor and civil rights led her to meet her future husband, Michael Lawrence, at a class on social issues at St. Ambrose College (now University) conducted by Fr. William O’Connor. Along with O’Connor they established the League for Social Justice, which in the late 1940s and early ‘50s documented racism in the Quad Cities area, led actions to integrate facilities, and built housing in impoverished areas. On Valentine’s Day 1952 Michael and Phyllis married, and shortly thereafter moved to Mishawaka, Indiana, where they had found work. Phyllis was a caseworker for the South Bend office of what is now the Division of Family Resources. She left there in 1953 as she and her husband began to raise a family. She returned to the workforce in the early 1970s and for the next 20 years was at the Indiana University South Bend library. She cemented warm and enduring friendships with her colleagues and commuted to work on her bicycle down Vine Street, weather permitting.

Phyllis was active in the St. Joseph County area social justice movement and was a congregant at Broadway Christian Parish. She played a part in preserving the Mishawaka Mary Phillips building, which was closed as an elementary school (all four of her children went there) and at risk of being demolished before area residents intervened. It is now affordable senior housing.

Our deepest condolences to Joe Lawrence. May Phyllis’s memory always be a blessing. For more on her, go to Legacy.com

Keep the donations coming so we can keep covering the exciting organizing that is happening in so many places in this country.  Remember, the best way to support us to sign up as a recurring donor today.