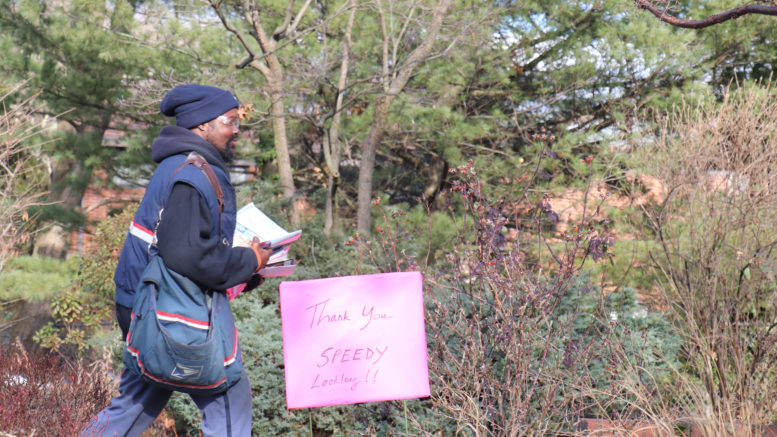 The following story comes to us through our community partners Print, the community newspaper for the East End. Subscribe to Print here.

Point Breeze poured out the love for “Speedy,” the neighborhood’s longtime mailman, who retired Dec. 30.

Speedy is Henry Lockley, a United States Postal Service carrier, who has been delivering mail to Point Breeze homes for more than three decades.
And, while a mailman named Speedy may conjure images of Mr. McFeely, the delivery man played by David Newell on “Mister Rogers Neighborhood,” the fictional mailman had nothing to do with Lockley’s name.

He was named “Speedy” eight years before Fred Rogers hit the airwaves.
“I was born fast,” Lockley explained. His mother did not make it out of the parking lot before little Henry was born. His aunt Lila called the baby “Speedy” and the name stuck.

Even in school, as a runner, he was a sprinter.

Lockley spent three years in the U.S. Army as a mortarman in the infantry and after his discharge, served in the Army Reserves for three years. It was 39 years ago that he got his start in the U.S. Postal Service after applying for every job in the post office. He had other routes first, but 31 years ago he started delivering to Point Breeze and he never left.

Though he is a resident of Garfield, Point Breeze also became his neighborhood as he walked 13 to 15 miles a day up and down the streets.
He has delivered lots of bills and lots of checks. Before college admissions went online, prospective students learned their fates through the envelopes he delivered

One young woman, who is now a nursing student, spent days waiting for the notice to come in the mail about her student loan. When he handed her the envelope she looked inside, then hugged and kissed him.

Through the years he kept his eyes on the community and got to know the people on the route.

One afternoon, while delivering to a home, he saw that the resident was unconscious on the floor. He knocked, she did not stir, so he went inside and was able to revive her with a wet rag, then he saw another woman across the room who was also unconscious. At first he thought they must have been overcome by carbon monoxide, but then he realized it was worse. The two women had suffered from a drug overdose.

He called 911 and performed CPR on the second woman until the emergency medical technicians arrived. They revived her with Narcan and she thanked them.

“Don’t thank us, thank the mailman,” Lockley said they told her.

“That was the most exciting thing that happened during my time here,” he said, “But I don’t want anyone to know who they were.”

“No day is ever the same,” he said. Sometimes he helped his customers carry in groceries. Other days he helped move furniture.

His three children, Chen’ree, 31, J.D., 30, and Dwayne, 29, have all grown up while he has walked his route in Point Breeze, watching the children grow up there, as well.

He also made sure residents received the forms they needed to put in changes of address if they left town.

In the last year, his route expanded and as so much commerce went online, his truck filled with more and more packages.

At 59, he decided it was time to retire before he got hurt. Once you are able to estimate when you can retire, it becomes relatively easier for someone to plan for their future assets and responsibilities. Maybe, Speedy could have had the same thing on his mind!

It is believed that, along with his retirement, he had also planned for other necessities beforehand, like appointing a conservator with the help of a professional (similar to a conservatorship attorney in Denver and nearby areas). He was always a pre-planner and liked to plan everything ahead of time to not get affected by unnecessary stress. Would he even have thought about how he could use his pension in the future? If he was looking at options to do a pension lump sum rollover to ira or anything similar? I mean, the possibility is likely if he has thought a little ahead for himself! Anyway, during his last week on the route, the signs started to appear saying “Thank you Speedy.”
Signs congratulating Lockley and wishing him well were posted on mailboxes, doors and utility poles. At the end of Kirtland Street a large sign hung from Homewood Cemetery’s fence that said “Speedy! Best Mailman Ever. Happy retirement we will miss you!!!!”

Along his route customers wished him well when they caught him at the door, telling a trailing reporter that Lockley is a gem who cannot be replaced.

One side of a sandwich board at the corner of South Lange Avenue and Reynolds Street read “Thank you Speedy” and on the other side: “Speedy, Your feet never stopped, your hands always shuffling, Always a Wave, a happy hello a constant in our days, now a wave and goodbye. Enjoy!”

On his last day there was even a big sign hanging from the fence at the East Liberty Post Office as he drove his truck into the lot for the last time.

What are Lockley’s plans? He isn’t planning any travel yet, because of the pandemic, but he will be working on his house and possibly expanding his collection of fish tanks.

He will also start working out, to make up for the daily 15 miles of walking he won’t have to do anymore.