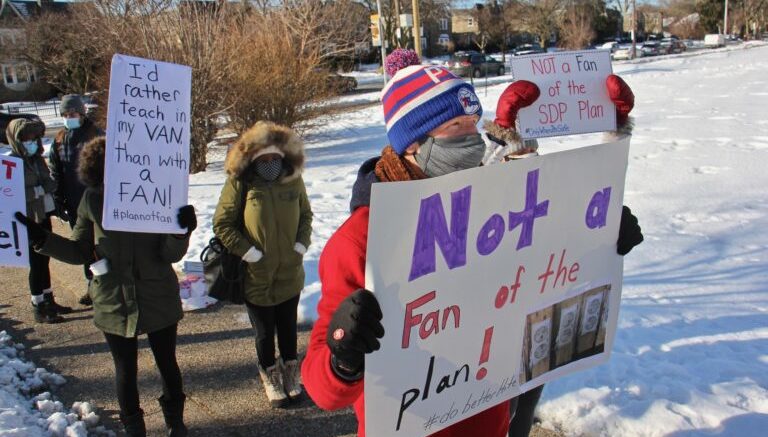 Teachers protest outside Gompers School against what they say is a rushed return to the classroom without proper safety precautions. (Emma Lee/WHYY)

Greetings from the Burgh, where we are getting back into the swing of things after taking the past few days to mourn our good friend Anne Feeney.

For those of you who have been inquiring, in line with my mama’s wishes, she will be buried in Mt. Olive, IL, next to one of her greatest heroes, Mother Jones. I honestly couldn’t think of a better way to honor my mother for all of the work she has done in her lifetime fighting for social justice. In the next week or so there will be a virtual memorial, and I’ll share the link in as many places as possible. Once it is safe to have a large gathering, we will be planning a celebration of life memorial in Pittsburgh. Hopefully we will be able to do this towards the end of the summer. Thanks again for the outpouring of love and condolences.

For more than a week, teachers in Philadelphia have threatened the Philadelphia School District that they would refuse a return to in-classroom teaching.

In response, the school district issued their own threats, saying they would discipline those that did not return to the classroom today. However, the teachers built so much community support from local politicians and parents that the district backed off.

Today, instead of some teachers returning to the classroom, they are teaching outdoors. WCAU has the story:

Philadelphia public school teachers bundled up in winter coats, gloves and hats sat outside on folding chairs on a bitter cold Monday morning as a show of solidarity over concerns about coronavirus safety amid a planned return to classrooms.

It was blistering cold outside the Southwark School in South Philadelphia as teachers taught online classes outside.

“Teaching outside for safety inside,” one of the teacher’s signs said.

For more, go to WCAU.

In the Lehigh Valley township of South Whitehall, approximately 35 public works employees are on strike after the township demanded that they, frontline workers, pay more for their health care contributions while being some of the most poorly paid workers in the township. WFMZ has the story:

Not only were they out for 36 hours during the storm but there was a water main break they took care of,” said Brian Taylor of Teamsters 773.

It’s work the South Whitehall Township public works department now won’t do if the next storm hits before another contract.

“We will hold out for as long as it takes to get a fair contract from the township,” Taylor said.

For more, go to WFMZ.

Lauren Kaori Gurley at Vice has the story:

“We’re patting Amazon on the back for paying $15 an hour in its warehouses, but this is what I was paid in 1990 to work in a unionized warehouse,” said Randy Korgan, director of Amazon Project. “The proliferation of Amazon jobs is a race to the bottom.”

At dawn, dozens of workers in hard hats and neon vests started a picket at the construction site—farmland that is being converted into a warehouse complex—holding signs that read “BZI Not Paying Area Standards” and “Hire Local Workers,” beside palm trees and a giant inflatable Scabby the Rat.

For more, head to Vice.

Only $462 short of our Amazon Union Vote Coverage Goal

Payday is only $462 away from hitting our $3,000 goal to cover the union vote at Amazon in Alabama.

Donate today so we can focus on covering the union vote at Amazon, and not on fundraising for it.

“Karen did not just lead our movement. Karen was our movement,” the union said in a statement. “She bowed to no one, and gave strength to tens of thousands of Chicago Teachers Union educators who followed her lead, and who live by her principles to this day.”

For more on Lewis, check out WBEZ.

Donate today to support our work covering the union vote at Amazon in Alabama. We’re only $462 away!

And don’t forget that the best way to support us is to sign up as a recurring donor.