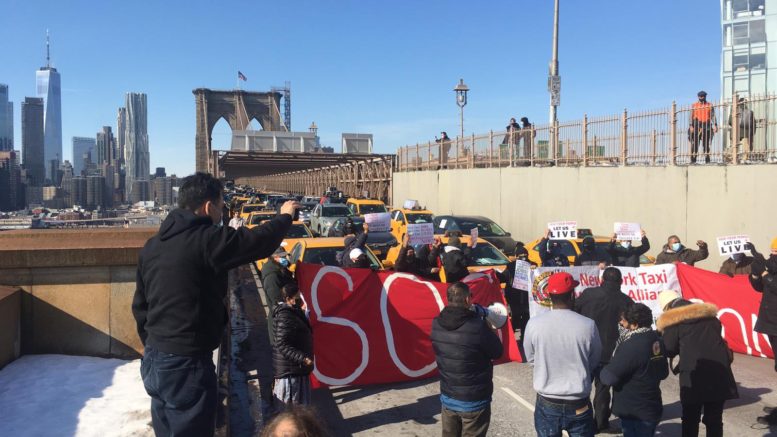 Greetings from the Burgh, where we’re facing yet another overcast, pollution-filled day that’s horrific for asthma sufferers.

We’re making steady progress toward our $3,000 goal and we’re only $190 short of hitting it. If you can, donate today to help us cover the union vote at Amazon in Alabama.

Remember, the best way to support us is to sign up as one of our more than 560 recurring donors today. You’re just a few clicks away.

The teachers declined to comment directly on the “sick-out” strike and the union denied that they were directly coordinating it.

For more, check out the Columbus Dispatch.

In New York City, taxi drivers shut down the Brooklyn Bridge demanding federal and local relief from the excessive debt they’ve accrued from purchasing the required medallion certification to drive taxis in the city.

While a group of taxi drivers gathered outside of Senator Chuck Schumer’s home in Brooklyn, Schumer announced his support for the federal legislation that the drivers demanded be enacted.

“Drivers took direct action today and sent an SOS to Congress, and Senator Schumer heeded our call,” said New York Taxi Worker Alliance Executive Director Bhaivari Desai. “We are so grateful for the support of Senator Schumer. The Mayor has no more excuses.”

For more, check out the Taxi Worker Alliance.

A bombshell exposé by the New York Times reveals that a labor contract signed on the last day of the Trump Administration may limit the ability of the Biden Administration to change immigration policy.

The Trump Administration even threw in concessions that would give the Border Patrol Union more funding and federal support. From the New York Times:

One of the agreements, for example, says: “No modifications whatsoever concerning the policies, hours, functions, alternate work schedules, resources, tools, compensation and the like of or afforded employees or contractors shall be implemented or occur without the prior affirmative consent” in writing by the union.

The complaint also characterized the agreements as granting “outsize” levels of “official time” — compensation for time spent on union activities — that vastly exceeded what other public employee unions received, the complaint said. Mr. David Seide, [a lawyer representing the whistle-blower], estimated that these concessions by Mr. Cuccinelli, [the former Senior Official Performing the Duties of the Deputy Secretary of Homeland Security] would cost taxpayers several million dollars a year.

The agreements also require that the government cover union-related travel expenses, granting it a benefit that Mr. Trump had banned in 2018.

For more, check out the New York Times.

On the 10th Anniversary of former Wisconsin Governor Scott Walker launching his union busting attack on the right to collective bargaining in Wisconsin, John Nichols, associate editor of The Capital Times, examined the role that the late folk musician Anne Feeney played in the Capitol Occupation.

From the Capital Times:

Workers were constantly thanking Feeney, who died last week at age 69. The lawyer turned songwriter showed on picket lines across the United States and around the world to sing the union songs of Ralph Chaplin, Florence Reece, Woody Guthrie, Pete Seeger and Josh White — along with compositions of her own, such as “Have You Been to Jail for Justice?”

Feeney’s song about the pride she and her comrades took when they were arrested for resisting injustice — “The more you study history the less you can deny it / A rotten law stays on the books ‘til folks like us defy it” — became a favorite of the Solidarity Singers who kept the spirit of the Wisconsin uprising alive with daily singing sessions at the Capitol. The singing infuriated Walker and his right-wing allies, and the governor pressured the Capitol Police to arrest the members of that warm-hearted ragtag ensemble. So Feeney came back to Madison and added her voice to the chorus, in joyous defiance of the governor and his stooges.

Walker was eventually voted out of office by the people of Wisconsin, and the Solidarity Singers finished their long run in the rotunda of the Capitol. But Feeney found plenty of protests to join during the Trump years, as she rallied crowds for labor rights, civil rights, women’s rights and every other economic, social and racial justice crusade that needed a song to get people up on their feet and marching.

For more, check out the Capitol Times.

Keep the donations coming for our fundraiser to cover the union election at Amazon in Alabama. Or, become one of our more than 560 recurring donors today.  This month we’re trying to sign up another 5 donors, and are almost there.