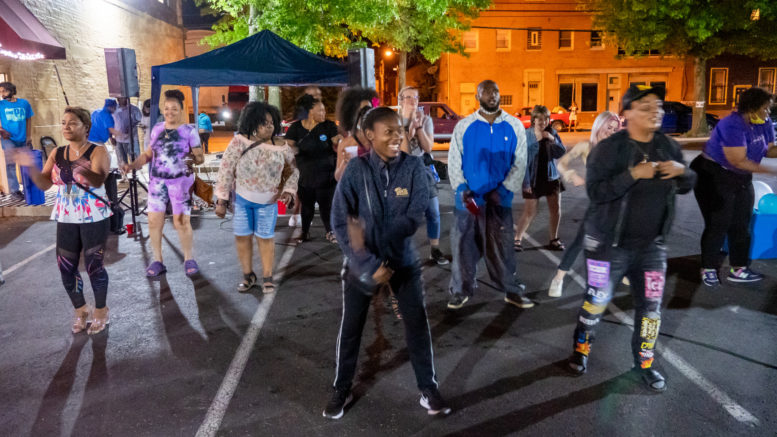 Garmany, a 62-year-old Black activist, was one of the hundreds of activists who streamed through the SEIU parking lot dancing and drinking the night away as Ed Gainey celebrated his victory over incumbent Mayor Bill Peduto in the Democratic Primary, paving the way to assume office in the Democrat-heavy city.

Many local reporters wrote off Gainey’s chance of winning but on Tuesday night, Gainey shocked the political establishment when Gainey defeated two-term incumbent Peduto by a margin of 46% to 39% to become the 1st Black Mayor in the history of Pittsburgh.

Garmany said she was ecstatic about the defeat. While working the dance floor hard, she said it was one of the happiest days for many activists in Pittsburgh.

“I feel shocked,” said Garmany. “Growing up in Pittsburgh, I never could imagine that we would have a Black mayor and I was gonna fight as hard as I could to see to it. I am just in awe that Pittsburgh chose Ed!”

Pittsburgh has been perennially ranked as the worst place for Black people to live in the United States. A recent data analysis by the Abolitionist Law Center found while Blacks account for only 23% of the population of Pittsburgh, they account for 70% of Pittsburgh’s arrests.

A study by Columbia Journalism School showed that local media in Pittsburgh was one of the most racist and disproportionately white in the country, which helps explain why many local media wrote off Gainey’s victory.

“It feels all our years of hard work have finally paid off,” said Wesley Gadsden, a Black field director of the community action group One Pennsylvania, as he ran around the dance floor shaking a tambourine. “It feels like we are finally bearing the fruits of our labor.”

Ross Tedder, a 21-year-old Black activist, shared that he had been considering leaving Pittsburgh, but Gainey’s election made him feel differently about the notoriously racist city.

“To see the first Black mayor elected after there have been so many years of us just staying in that position of all these awful jobs and not seeing any opportunity for improvement is really cool,” Tedder said.

However, Gainey warned supporters in his victory speech that there was much work ahead to change the city and he needed the support of activists.

“One person can’t change the city,” said Gainey in his victory speech Tuesday night. “A city is changed by all of us. A city is changed when we all come together to improve the quality of life for everybody.”

Typically, Pittsburgh mayors don’t call on activists to assist them in pushing political forces to achieve their goals, but Gainey is unlike any mayor in Pittsburgh’s history.

Born to a 15-year-old mother, he grew up in the housing projects in East Liberty. After graduating from the historically Black Morgan State University, he spent decades working as a community economic development specialist for the City of Pittsburgh. It took three times running against former State Rep. Joe Preston Jr. before Gainey finally beat the 15-term State Rep. in 2012.

A low-key, low-ego politician, Gainey repeatedly stressed in campaign stops that he would need young activists’ help and sometimes their criticism to make the city more equitable.

On Tuesday night, as activists celebrated, many made it clear that the fight to change Pittsburgh was far from over and that they would have to keep pushing for more.

“Honestly, we’re gonna keep on fighting just as hard. What it means is that we’re moving to offense from defense, but the work we’re doing isn’t gonna change,” said Gadsden.

And then he joined his fellow activists who danced and drank and celebrated the election of Pittsburgh’s first Black mayor as the party went well past midnight as a new day began in Pittsburgh politics.

Donate to Help Us Cover the Fight for Racial Justice.