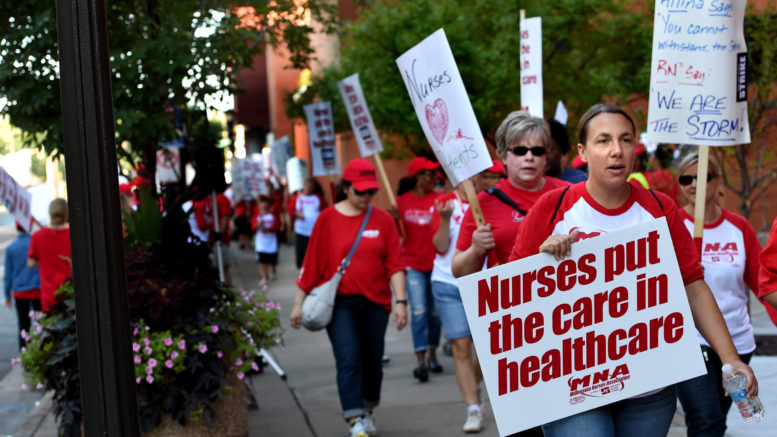 Nurses and supporters walk on the sidewalk in front of United Hospital in St. Paul after nurses go on strike Monday, Sept. 5, 2016. Thousands of nurses at five Minnesota hospitals -- all part of Allina Health -- are scheduled to go on strike at 7 a.m. Monday, Labor Day, in a dispute over health insurance, workplace safety and staffing levels. (Pioneer Press: Jean Pieri)

Writing for the Guardian, Payday Senior Labor Reporter filed a dispatch from Western Pennsylvania looking at a why a wave of nurses’ strike is expected to follow a wave of teachers’ strikes:

Nurses’ union leaders say that the growing militancy of nurses to strike is driven by the same forces as the teachers’ strike: underfunding of community healthcare systems, frustration with male-dominated management in a profession that is 80% female, and growing community support nationwide for unions.

“Just like educators who care for our nation’s children, nurses are constantly being asked to do more with less,” said AFT president Randi Weingarten, whose union represents over 120,000 healthcare workers and is the second-largest nurses’ union in the AFL-CIO.

“Nurses and educators are on the front lines every day, at great personal sacrifice, selflessly taking care of our most vulnerable – our young people and those who are sick,” said Weingarten. “The wave of educator activism has inspired nurses to fight the same fight: for the people they care for, for the resources and security to do their jobs well, for fair pay, for adequate staffing, for latitude and autonomy, and for the right to be treated as professionals.”

To read the full dispatch, go to the Guardian.