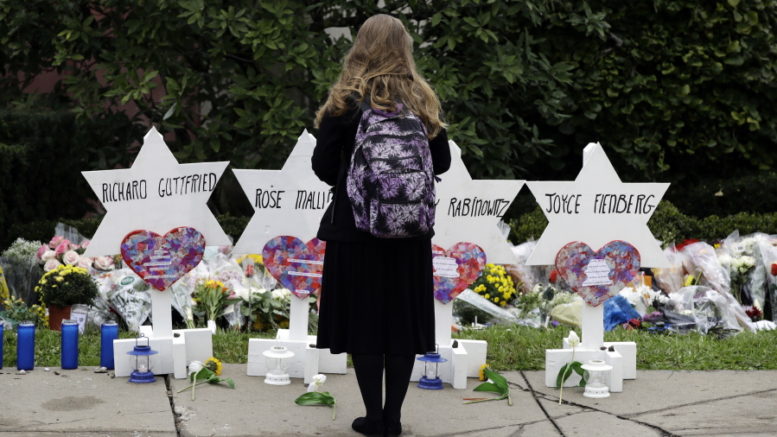 Stars of David with the names of those killed in a deadly shooting at the Tree of Life Synagogue, stand in front of the synagogue in Pittsburgh, Monday, Oct. 29, 2018. (AP Photo/Matt Rourke)

As a Jew, I am proud to announce the creation of the Jewish Yinzer Fund for Immigrant and Racial Justice Labor Reporting to honor those  11 Jews killed at the Tree of Life Synagogue in a neighborhood, where I grew up.

The fund will provide sorely needed reporting through syndication deals to underfunded community newspapers both in communities of color in the city as well as in small-town newspapers deep in the heart of Trump Country.

As an project of the University of Pennsylvania-Rutgers’ joint Media, Inequality, and Change Center (MIC), Payday Report is beginning to raise funds to launch the Jewish Yinzer Fund for Immigrant and Racial Justice Labor Reporting.

On the morning of October 27th, Bowers entered the Tree of Life synagogue and massacred 11 Jews because their synagogue was active with the Hebrew Immigrants Aid Society; a Jewish organization dedicated to helping to bring immigrants of all backgrounds to this country.

For me, I can’t stop thinking about that day – it was the toughest day of my career as a reporter.

As a child, I had attended summer camp across the street from the Tree of Life synagogue. And on that morning, I watched as SWAT teams moved past my childhood bus stop as they began to secure the building.

The neighborhood looked like a war zone with SWAT teams walking around in camouflage uniforms. Quickly, a sense of panic began to spread throughout the neighborhood that we as Jews were now, possibl, living in a war zone, where we would be targeted based on our politics and our beliefs.

As a labor reporter, I found myself thinking about Mr. Bower’s fascination with right-wing talk radio.

What if on those long truck rides, he had good labor reporting? What if Richard Bowers could have turned and how workers, who sounded like him, talking about economic issues with workers, whose voices sounded that nothing like him, maybe even talk through a translation?

When I studied journalism in Brasil, we used to refer to journalism as a way of “community therapy.” Journalism is a means through — which people can communicate with people that they would otherwise never communicate — and begin to understand cultures that are very different.

So to honor the victims of the Tree of Life Synagogue Massacre, Payday is launching the Jewish Yinzer Fund for Immigrant and Racial Justice Labor Reporting.

Labor reporting has the ability to heal and bring people together to amplify voices that are trying to organize for a better society.

As a Jew, I know that reporting on the calls in the streets of Squirrel Hill for solidarity with immigrants in the days following the Tree of Life synagogue was healing for me.

In the day and the weeks that followed, I know that covering the response of the immigrants’ rights community to the massacre was healing for me as someone, who grew up around there. I watched as mourners rejected calls for armed guns and instead led chants calling for “Safety through Solidarity.”

We intend to do labor reporting that promotes “Safety through Solidarity.”

Earlier this month, Payday exposed how the Colcom Foundation, which gave $19 million to three anti-immigrant groups identified as hate groups, was being allowed to prominently sponsor Pittsburgh’s Downtown Holiday Market. After we broke our story, local news outlets followed up and groups began protesting the downtown holiday market.

As a result of our reporting, we were able to get the Pittsburgh Downtown Partnership to remove Colcom as the sponsor of the city’s Holiday Market and show that hate has no place in my hometown.

We, as a publication,  intend to do more reporting aimed at racial justice. However, we need your support to do it.

However, we are going to need your help as a reader to do this. We are hoping to raise $10,000 from our readers to show funders how serious and committed we collectively as a publication are trying to solve this problem.

As our readers and donors, many of you know that Payday has often been at forefront of labor reporting; creating trails that quite often mainstream publications follow and replicate.

We spent two years in the South warning the public that a major uprising on labor’s behalf was brewing, and in the teachers’ strikes of last spring, we were validated.

Payday once again aims to blaze a new trail and show through the Jewish Yinzer Fund for Immigrant and Racial Justice Labor Reporting how journalism can be used for healing in the wake of the Tree of Life Synagogue Massacre.

This fund will be used not just to produce reporting online, but also to syndicate content free of charge to small town newspapers, where labor reporting is so desperately needed.

Let us honor our dead by promoting voices of multi-cultural organizing. May their memories always be a blessing to us all.