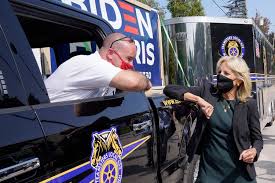 Greetings from the Burgh, where Payday is monitoring the latest developments from the union drive at Amazon and furiously fundraising for the cost of a rental car. If you can, donate today.

The visit comes as politicians and activists make one final push for union votes ahead of the deadline for balloting on March 29.

While campaigning for Joe Biden’s presidency, Dr. Biden, who is a member of the NEA as a community college instructor in Northern Virginia, repeatedly praised the benefits of unions.

“I’m a proud union member,” tweeted Dr. Biden last September. “Trust me when I say this campaign stands with labor. We will always fight to help workers organize unions and collectively bargain.”

It’s still unclear if Dr. Biden will speak about the benefits of unionization during her visit to Birmingham much like her husband did in an unprecedented video that was released earlier this month supporting the union effort. However, labor leaders, who spoke to Payday Report, expect that while in Birmingham this Friday Dr. Biden will issue comments that broadly support the effort of unionization efforts overall.

In San Francisco, over 700 janitors, members of SEIU, walked off the job today. The San Francisco Chronicle has the story:

Roughly 700 custodians are expected to form roughly 20 strike lines at various locations across San Francisco at 6 a.m. Wednesday. Among the buildings being picketed is the Salesforce Tower. The strike, which is expected to last for three days, comes after eight months of negotiations to reach a union contract, said Olga Miranda, the president of SEIU Local 87.

Striking workers are calling for fair pay, seniority rights, and workplace safety protections, such as “sexual harassment safeguards” and improved ventilation in the buildings they work in, union officials said. At least 26 San Francisco custodians in the union have died from COVID-19 since the start of the coronavirus pandemic, Miranda said, and roughly 3,000 have been laid off.

For more, check out the San Francisco Chronicle.

Writers at the ABC game show “The Chase” went on strike today after the network refused to cover writers under The Writers Guild of America’s Minimum Basic Agreement.

“We have alerted Writers Guild members that ITV America is refusing to honor the choice of writers at THE CHASE to be represented by the union and to receive pension and health benefits, residuals, and the other basic provisions of our industry wide MBA,” said Writers Guild of America East Executive Director Lowell Peterson. “Guild members will stand united in not crossing the picket line at THE CHASE.”

One-Third of Holocaust Survivors Living in Poverty in the US

Bernard Offen knows hunger and despair. From ages 10 to 16, he survived five concentration camps during the Holocaust.

Now 92, Offen divides his time between California and Poland, where he gives tours of the former Nazi concentration camp Auschwitz-Birkenau and shows visitors the bunk where he slept crammed with other Jewish prisoners, the building where he was tattooed with his identification number and the crematorium where his father’s body was burned.

More than 59 of his extended family members in Poland perished during the Holocaust, he said. Offen was determined to rebuild his life after World War II ended and he immigrated to Detroit, where he and his wife raised two sons and started a coin laundry business in 1951.

It never occurred to him that when he reached his 90s, he might need to ask for help to keep food in his refrigerator.

Finally, Uprise RI has a cool infographic look at how the Black Lives Matter movement inspired a union drive at a Rhode Island coffee shop. Eventually, the workers used the community support they garnered to turn the coffee shop into a worker-owned cooperative CUPS Cooperative. Give it a read at Uprise RI.

Alright folks that’s all for today. Keep sending story ideas, tips, comments, and recipe tips to [email protected] (Seriously please send recipe ideas, I have to get better at cooking.)

Don’t forget to donate so we can pay for our rental car in Birmingham.

Remember the best way to support us is to sign up as a recurring donor today.