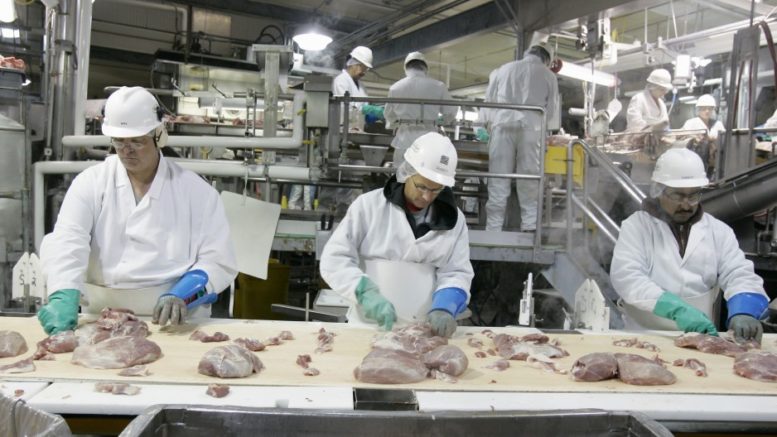 Greetings from the Burgh, but our heart is out in Rural America, where meatpackers are facing brutal conditions.

Our heart goes out to all the meatpackers fight uphill battles to save their lives everyday.

Meatpacking workers have tested positive for COVID-19 at 80 different facilities in 26 states, resulting in 28 plant closures for one day or more.

Despite widespread outbreaks of COVID-19 at plants throughout the United States, Trump’s OSHA has actually decided to weaken enforcement standards.

From Issac Scher at Business Insider:

The Occupational Safety and Health Administration, will not enforce coronavirus-related safety guidelines for the plants so long as they demonstrate “good faith” efforts to keep workers safe, according to OSHA Solicitor of Labor Kate O’Scannlain and Principal Deputy Assistant Secretary Loren Sweatt.

If the “good faith” condition is met, the Department of Labor will consider heading off worker lawsuits against their employers, O’Scannlain and Sweatt said in a statement on Tuesday.

“Likewise, the Department of Labor will consider similar requests by workers if their employer has not taken steps in good faith to follow the Joint Meat Processing Guidance,” OSHA added.

Earlier this week, the Trump Administration issued an Executive Order to use the Defense Production Act to order meatpacking plants to remain open.

Now, Smithfields is already using Trump’s Executive Order to attempt to block inspections of their plant. Fatima Hussein at Bloomberg has the story:

The Rural Community Workers Alliance, which represents Smithfield workers in Missouri, is seeking an order to force the company to comply with guidance from the Centers for Disease Control and Prevention and state public health officials, as well as other worker protection requirements, at a Milan, Mo., plant. Nearly eight plant workers already have been forced to stay home because of Covid-19 symptoms.

A court order would allow the group to inspect the plant and would force the company to make certain safety changes.

Calling a court order to allow plaintiffs to inspect the plant “unprecedented,” Alexandra B. Cunningham, with Hunton Andrews Kurth LLP in Richmond, Va., represented Smithfield at the hearing Thursday in the U.S. District Court for the Western District of Missouri.

Cunningham said Presidential order is proof that the federal government has primary jurisdiction over the matter.

Go to Bloomberg to read the full story.

Since COVID-19 has begun, OSHA has faced record levels of complaints. Caroline O’Donovan at Buzzfeed has the story:

Health care, the US Postal Service, and supermarkets are the top industries for worker complaints of employers failing to protect them on the front lines of the coronavirus pandemic.

Between Jan. 1 and April 22, workers filed 7,328 complaints about working conditions with the Occupational Safety and Health Administration (OSHA), according to updated data, the agency released on Monday. A broad swath of health care professions account for the largest percentage of that total, with hospital workers accounting for 11% with 830 complaints.

Workers in nursing care facilities have filed 233 complaints, or 3% of all the complaints filed. In total, workers in healthcare-related professions made up more than one-quarter of the total complaints.

Though they represent only 2.5% of the total, at 182 complaints, supermarket workers filed the second-largest number of coronavirus-related allegations, voicing concerns about poor social distancing and disinfecting protocols and employers failing to provide personal protective equipment.

Many meatpackers also find themselves under tough Republican Governors, who are threatening to block unemployment insurance for workers, who refuse to work because of COVID-19

Under federal guidelines, workers are allowed to collect unemployment, even if they aren’t laid off if they are forced to leave their job due to concerns about contracting COVID-19. A loose legal interpretation that states are implementing differently.

State officials nationwide have echoed that approach. Tennessee, for example, has said it may “potentially disqualify claimants from receiving unemployment insurance benefits” if workers who are temporarily laid off turn down an opportunity to retake their jobs, said Chris Cannon, a spokesman for the state’s unemployment agency.

Iowa also has signaled in recent statements it plans to ramp up its enforcement efforts. Its directive has taken on added significance since Trump signed an executive order Tuesday that could result in meat-processing plants staying open — including those in Iowa where workers recently died of the coronavirus. A spokesperson for Iowa’s governor did not respond to a request for comment.

In Oklahoma, top economic officials even publicly discussed restricting benefits last week in an attempt to get residents back on the job faster. The state is among more than a dozen with a minimum wage of $7.25, according to data compiled by the National Conference of State Legislatures.

“If there is a claimant out there that says, ‘You know what, I can make more money sitting at home, drawing this extra $600, and some other benefits, then if the employer will contact us, that is considered a refusal of civil work and we will cut off their benefits,” said Teresa Thomas Keller, the deputy director of the Oklahoma Employment Security Commission, during the call conducted over Zoom and published online. The Frontier, a Tulsa news outlet, first reported on the meeting.

Help Us Pay End of the Month Bills

Folks, its the end of the month, and we have a ton of bills to pay. Our effort is entirely reader-funded, so we rely on your donations.

Be the first to comment on "4,400 Meatpackers Have COVID – Trump Relaxes OSHA Meatpacking Rules – GOP Govs Block Unemployment for Meatpackers"