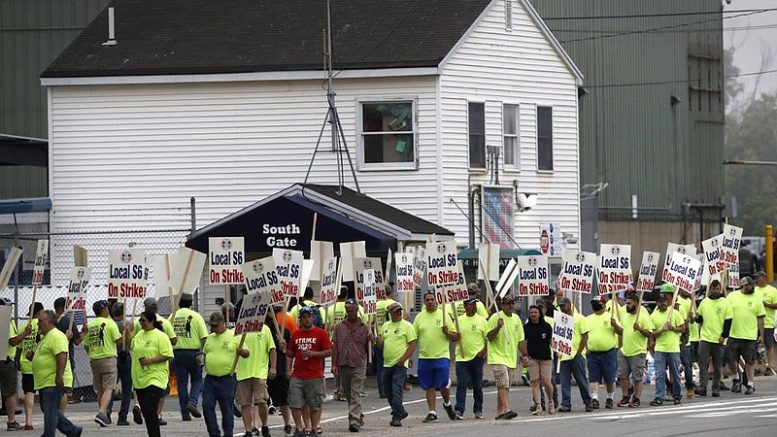 Greetings from the Burgh, where Payday has, unfortunately, wasting valuable time responding to yet another smear campaign from the racist leadership of the AFL-CIO, which refuses to expel cop unions.

First, as many folks can tell, we redesigned our logo and are rolling out more upgrades to professionalize the website. We are trying to improve our Strike Tracker Map so we can collect more info about strikes.

Already in the past month we’ve seen an immense surge in strikes prompted by the Black Lives Matter protests.

Donate today so we can get Payday out to more people.

Thousands of Shipyard Workers Walk off the Job

On Sunday, more than 4,300 workers at the Navy’s largest shipyard in Bath, Maine walked off the job.

“Despite our repeated warnings to the management of Bath Iron Works, this employer has continued to take taxpayer dollars and outsource good Maine jobs to out-of-state contractors,” said International Machinist President Robert Martinez in a statement.

“The company is engaged in flat-out union-busting, and is exploiting the current pandemic to attempt to outsource work from its dedicated employees, who are risking their health to build ships that protect our national security,” said Martinez.

This Friday, over 1,000 nurses at HCA plan to go on strike. The strike comes as the nation’s largest for-profit hospital chain HCA faces increased organizing.

Michael Sainato at the Guardian has the story:

“When the pandemic hit, I thought HCA, our hospital, would be revving up the resources, that we would have more resources, more staff, but unfortunately it was the opposite. They started making cuts, and we’re working with skeleton crews,” McIntosh added.

“We’re being cut to the bare minimum.”

Job listings for nurses at HCA owned hospitals in the Los Angeles area were posted in anticipation of the strike actions. HCA reportedly created a unit focused on strike-related labor shortages, offering nurses who appear for shifts during strikes higher pay than they currently receive and a free continental breakfast. The company is also seeking to hire labor relations directors in Nashville, Denver, Dallas and Kansas City, and has continued retaining union avoidance consultants in Asheville, North Carolina, amid a union organizing drive at Mission Hospital.

Over at HuffPost, veteran labor reporter Dave Jamieson takes a deep dive into a series of reforms that could help break up the influence of corrupt cop unions:

[Catherine Fisk, a professor at the University of California, Berkeley, School of Law] said police unions employ sophisticated negotiators who will find ways to work around new limits on their bargaining powers. Instead, she has proposed giving them some competition.

Labor relations in the U.S. are carried out under an “exclusive representation” system, meaning one union represents everyone in a bargaining unit. But Fisk said laws can be changed to empower other, smaller unions that challenge the status quo within the police department.

That could take the form of, say, a Black Lives Matter caucus within a police department discussing use-of-force reforms with the city. The idea is to empower officers who are concerned about excessive force and might be part of a solution.

“It would create incentives, or some leverage within the police department and within the rank and file, to highlight problems in the disciplinary system and try to make an end-run around union leadership that has decided for whatever reason to oppose reform,” she said.

Finally, some union staffers, who write for Jacobin, which  Payday has long criticized for their wage practices, have claimed that Payday’s strike-tracking methodology is “inaccurate.”

Strangely, these folks have found an ally in AFL-CIO, who has been attacking our Black Lives Matter strike coverage on their social media. Previously, Payday had criticized the AFL-CIO for refusing to expel cop unions.

We have been transparent about our methodology of how we define a “strike” right on Payday’s Strike Tracker webpage, where we are clear about how we define strikes. We have provided hundreds of links that describe the nature of each of the over 800 various types of strikes we have identified.

However, the author Labor Notes organizer, Chris Brooks, who I’ve criticized heavily for his support of Jacobin, fails to reveal his conflict-of-interest; hence why I suspect his own publication Labor Notes would not publish this story given that it fails to merit basic journalistic standards of disclosure.

Black Worker Define These as Strikes

These attacks are not only dishonest in failing to reveal the conflict-of-interests of going after a reporter — who had previously criticized their organizations — but they are racist. They fail to apply the same standards of defining and labeling something a strike used to the West Virginia Teachers’ Strike to the much more complex sets of strikes inspired by the Black Lives Matter.

Worse, these white union staffers refuse to define things as strikes even when Black worker groups such as Black Lives Seattle label the more the 200 employer closings in their state as “strikes.”

The article, in mention, takes criticism with the point that we labeled “work stoppages,” where workers took time off from their regular activists to confront management over things that they would like in the work stoppage.

The West Virginia Standard of How to Define a Strike

During the West Virginia Teachers’ strike, the majority of school administrators decided to shut down schools pre-emptively out of fear that no one would show up to work, even in places where there had been very little organizing.

In my experience reporting on the ground in West Virginia, I found many teachers who only discovered that teachers were going on strike when their employer told them that they were sent them notifications from their boss, letting them know their schools were closed.

Likewise, many employers have chosen to pre-emptively close their work locations after #BlackLivesMatter has called for workers to go on strike.

Similarly, in 2006, hundreds of small Latino-owned businesses took part in the May Day General Strike. These same organizations are now attempting to discredit Payday’s reporting and are trying to diminish the organizing that has led to this strike wave.

Should Black Workers or White Union Staffers Decide What Is a Strike?

Some small business owners, particularly in the African-American community, have often closed their small businesses to support the strikes as often happens during mass strike waves. The Black owners of these small businesses in Chattanooga have even defined these closings as a “revenue strike.”

Our definition of a strike is simple: any action or threat of action that forces an employer to close, whether to stop work even for just a few minutes, is a strike.

This was the definition that every organization used for its reporting on West Virginia. We should apply the same strike definition to Black workers that we do when white workers force an employer to close.

White union staffers like Chris Brooks shouldn’t get to overrule Black workers on how they choose to define their collective action.

The attacks are designed to hurt Payday’s credibility as a news organization critical of corruption in the labor movement and the left press. However, what they are doing is much worse: they are erasing the role of Black workers in motivating the most significant strike wave in recent history.

That’s it for today. Donate to Help Us Keep Covering Fight Back Against Racial Injustice & COVID.