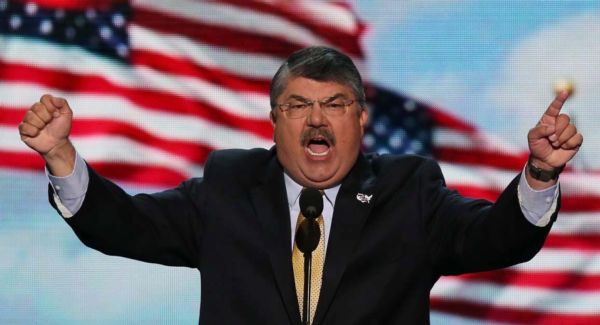 In 2018, the AFL-CIO honored me immensely when they hung a banner commemorating my coverage of the teachers’ strike in the AFL-CIO’s lobby.

I was so proud to have a banner in the AFL-CIO lobby near priceless labor art, including by my hero UE organizer-turned-painter Ralph Fasanella.

However, now this week, after making comments criticizing the AFL-CIO for failing to expel corrupt police unions from the AFL-CIO, both the AFL-CIO and its President Richard Trumka have blocked me on twitter.

This may seem petty, but by blocking a reporter from commenting on the AFL-CIO’s twitter feed, the AFL is attempting to prevent critical comments of their positions from showing up in the replies of AFL-CIO Twitter feed, which has over 132,000 followers.

Tweets from the AFL-CIO regularly go viral and reach millions of people, so by being unable to respond to them, the AFL-CIO is preventing independent reporters from fact-checking their white-washing of corrupt police unions that they refuse to expel from their federation.

As numerous lawsuits have shown, publicly elected officials, such as AFL-CIO President Richard Trumka, are not allowed to block reporters from commenting on their twitter feeds as it violates the spirit of Freedom of Press as defined under the 1st Amendment.

In essence, what the AFL-CIO is doing censorship of critics.

(For more, read the Electronic Frontier Foundation on how publicly elected official blocking reporters is a violation of the 1st Amendment).

Not only is this an attack on the Freedom of the Press, but as a dues-paying member of the Washington-Baltimore NewsGuild, an affiliate of CWA, my union dues pay a portion Trumka’s salary. I have a right as a dues-paying union member of an AFL-CIO affiliated union to know what my AFL-CIO President Richard Trumka is saying.

I am on vacation now (as I just wrapped up a baseball magazine story coming out in the American Prospect tomorrow), but will have more on this next week when I return.

If the AFL-CIO fails to fix correct this issue, I will be forced to take action to correct it.

Donate to Payday to Continue to Cover the Fight for Racial Justice Inside the Labor Movement.