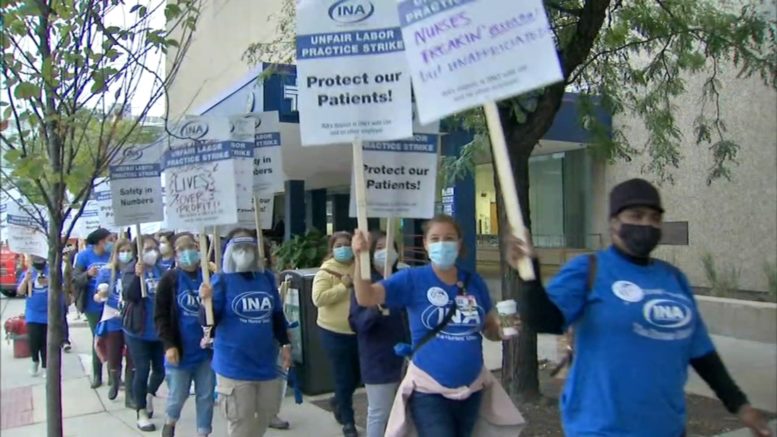 Greetings from the Burgh, where we’ve been very busy tracking college strikes across the country. Check out our strike tracker for the latest numbers that now total more than 1,000 strikes since COVID-19 began.

Last week, we took a break from publishing the newsletter, and in collaboration with photojournalist Zach Roberts, began filming a mini-documentary about racial justice and immigrants’ rights in Pittsburgh in the wake of the Tree of Life Synagogue massacre.

We plan to release the documentary on the second anniversary of the Tree of Life massacre on October 27th. The documentary features top activists in the immigration and racial justice communities talking about what has changed and what hasn’t changed in Pittsburgh since the massacre.

To support this mini-documentary, please donate today, or sign up to become a recurring donor to Payday Report as recurring donations help us the most. Thank you.

Over 4,000 Nurses to Strike for More than a Week at University of Illinois Chicago

At the University of Illinois Hospital in Chicago, more than 4,000 nurses have gone on strike over low pay, poor staffing levels, and a lack of personal protective equipment.

“We are warriors in this fight,” Doris Carrol, President of the Illinois Nurses Association told WLS. “During the pandemic, our hospital called us heroes and now they are treating us like zeros.”

The strike is the first one at the hospital in more than 40 years and the union has already declared that they intend to be on strike for at least a week.

For more, go to WLS.

2,000 Graduate Employees Strike at the University of Michigan till at Least Friday

At the University of Michigan, thousands of graduate employees are voting to extend their strike against the unsafe reopening plans of the school.

From the Michigan Daily:

Eighty percent of union members who voted supported continuing the strike, according to the [Graduate Employees’ Organization] Twitter account. The union will protest outside of the University’s Detroit Center Monday morning, in addition to holding a general assembly in Ann Arbor on the Diag.

In an email to members announcing the results of the vote, GEO leadership highlighted the success of the first week of the work stoppage.

“Last week, we proved to University leaders, to the University community, and to each other that GEO is committed to fighting for a safe and just community, and we are not prepared to stop until we get it,” the email read.

Other workers are joining the strike and engaging in slowdowns to show their solidarity according to MLive.com

Go to the Michigan Daily for more.

Out on Long Island, teachers went on strike to protest the unsafe reopening of Schreiber High School. Ross Weldon from The Island Now reports:

Joy Grasso-Krebs, a science teacher at Schreiber and an officer in the Port Washington Teachers Association (PWTA), said in a videotaped statement on the day of the walkout that staff members were “frustrated, anxious and scared for their health and safety.”

“We worry about the health and safety of our students who are going to be walking through that school,” said Grasso-Krebs in a Facebook live post. “We are anxious about implementing livestream and the security of the livestream, and there are so many issues that have been imposed upon us, we just don’t feel prepared.”

The teachers’ union, however, is facing opposition from some parents, who sent a petition signed by over 1,000 parents demanding that schools reopen.

For more on the story, check out The Island Now.

That’s all for today, folks. Donate today so we can keep tracking what looks like a growing strike wave.

Send along any tips or story ideas here to [email protected].

Be the first to comment on "4,000 Nurses Strike in Chicago – 2,000 Grad Employees at Michigan – Long Island Teachers Wildcat"