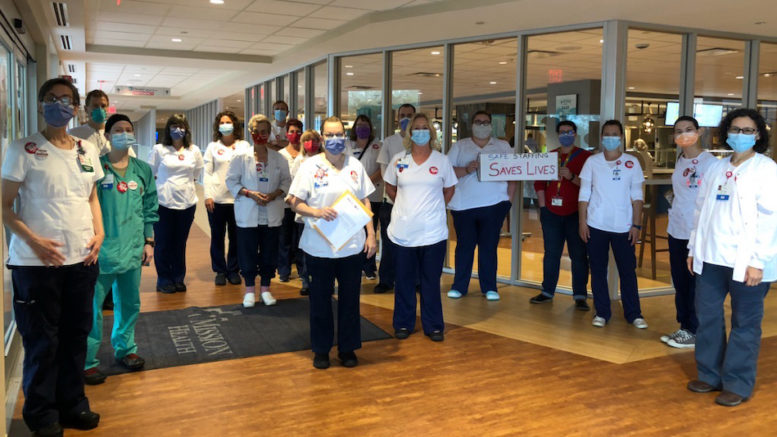 Greetings from the Burgh. I’m Clarissa, Payday Associate Editor, filling in for Mike who’s out because of Pittsburgh’s rampant pollution. If you want to help him out, send Payday a donation today. Or, if you can’t, follow Payday on Twitter or Facebook.

In the largest union victory in the South since 2008, nearly 1,800 Asheville, North Carolina nurses defeated union-busting law firms and finally unionized. The nurses from Mission Hospital will be represented by National Nurses United. From The Intercept:

HCA fiercely fought the union effort, as The Intercept reported in May, bringing in a phalanx of union-busting firms to intimidate nurses into voting no.[…]The final vote count, at 965 to 411, was a landslide in favor of the union.

“We could not be more proud of the unity, the perseverance, and the patient advocacy and dedication of the Mission RNs to their patients, their colleagues, and their community,” said NNU and NNOC Executive Director Bonnie Castillo, RN, in a statement. “At a time when nurses are in a daily battle with the deadly fight for their patients and their own lives in the era of COVID-19, they have demonstrated incomparable courage and resilience that is an inspiration to all of us.”

To read more, head to The Intercept.

Librarians and librarian staff in Oak Lawn, Illinois have made it official: they intend to unionize. The nearly 80 full- and part-time employees are seeking representation from AFSCME Council 31, citing the death of a security guard from COVID-19 as well as the library board’s rush to re-open as reasons for unionizing. The Patch.com reports:

“By coming together in our union, library employees will have a strong voice in the decision that affect us,” library assistant Eric Guzman said in a statement. “Unfortunately we’ve seen management rush to reopen in this pandemic without enough attention to safety, along with cuts to staff and the programs that library patrons care about. We want to speak up for ourselves and for the services we provide to the community.”

An open letter to library employees began hitting mailboxes over the weekend, containing union cards. Employees eligible for unionization, including, full-time salaried librarians, associates and assistants as well as part-time hourly employees and pages, are being encouraged to sign the cards, which will be submitted to the Illinois Labor Relations Board for recognition.”

Read the full story at Patch.com.

3,800 GE Workers Vote No By 87%  On Contract Proposal Setting Stage For Strike

Increasingly, it looks like GE workers in Louisville, who voted last month to authorize a strike by a margin of 99% last month, may do so.

GE’s most recent contract proposal didn’t go over well with its workers as 87% voted it down. While the offer included a wage increase of $15.50 an hour from $14 (among other benefits), it was not enough. Grace Schneider from the Louisville Courier writes:

Both [“Dino” Driskell, the union president] and [company spokesperson Julie Wood] cited the COVID-19 crisis as an aggravating factor. Wood said that “this year has been full of change and volatility as a result of COVID-19. The long-lasting impact on our economy and our business is still uncertain.”

For workers, the company’s initial handling of the outbreak, which involved keeping assembly lines running as usual, ignited anger. Union members complained that their safety was secondary as the coronavirus marched into Louisville. The parties reached agreement on several safety precautions and rules for workers to isolate after an exposure.

Read the full story at The Louisville Courier Journal.

After nearly two weeks of striking, the University of Michigan’s graduate student strike is over. MLive reports that The Graduate Employees’ Organization accepted a deal late Wednesday night.

The deal came after GEO accepted the second offer it had received from the university since going on strike on Sept. 8, with 1,074 members voting to accept UM’s offer, while 239 voted against it and another 66 abstained.

“Thousands of members and allies came out in force day after day on the virtual and in-person picket lines to show that graduate students and their allies were prepared to fight for this community,” the union said in a statement. “By withholding our labor, building coalitions, and making our power impossible to ignore, we forced the university to give us an offer with substantive progress toward a safe and just campus.”

For more, head to MLive.com.

The Mississippi State Auditor Shad White wants Ole Miss to fire its professor James Thomas. The reasoning? He participated in a two-day “Scholar Strike” on Sept. 8th and 9th, which was a national call for academics to protest racism and police brutality. The Clarion Ledger’s Luke Ramseth explains:

A state auditor would not typically get involved in such university personnel issues. But White argued it’s his responsibility to “ensure that no public money is illegally spent,” including on a Mississippi employee who is not working due to a strike.

“You’ve got a professor that’s telling the world that he’s engaging in a strike,” White said. “I wanted to make sure, at minimum, he doesn’t get paid for those two days he went on strike, and I believe that falls completely under my purview.”

Read the full story at The Clarion Ledger.

Finally, our last story comes from Victoria, Texas where this year marks the 50th anniversary of the Mexican-American walkout there. It was on September 16, 1970, that Jimmy Rodriguez, Tommy Loa, and other members of the Mexican American Youth Organization organized a walkout to protest the need for more Mexican-American teachers. From the Victoria Advocate:

Just after class started on Sept. 16, Loa walked out, and about 80 students followed him.

They picked up more students at Victoria High School. In all, about 150 students walked out, Rodriguez said.

“There was so much discrimination at that time. It was something we felt we needed to do — to say, ‘We are not animals and second-class citizens. We’re Americans,’” said Loa, who now lives in Weatherford. “This was just something to make a statement, and we had to be bold for the people in control to take notice. Things had to change, and they have a lot. Thank God for that.”

Head to the Victoria Advocate for more.

That’s all for today, folks (as Mike would say). Head to Payday Report to donate or read our latest stories. Lastly, if you have any tips or ideas, send them to Mike Elk at [email protected].

Be the first to comment on "1,800 NC Nurses Win Biggest Union Drive in South in a Decade – 3,800 GE Workers Move to Strike in Louisville – Michigan Graduate Employees End Strike"