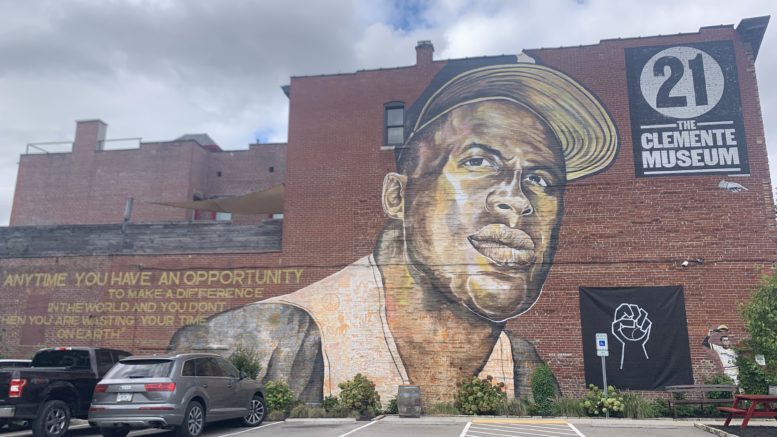 Over the weekend, however, the Roberto Clemente Museum’s Black Lives Matter banner was vandalized and stolen at 5 a.m. on Sunday.

Video surveillance from the museum shows that the banner, a black fist holding a baseball in solidarity with the Black Lives Matter movement, was taken down and stolen by a white woman who climbed onto a bench to pull down the massive 12 foot by 12-foot banner.

The banner has yet to be found despite an extensive search throughout the Lawrenceville neighborhood.

The museum hung the banner, knowing that Clemente would have hung it there himself.

“Clemente would have been out there leading these [BLM] protests,” said museum curator Duane Rieder.

Clemente was a pioneering figure not just because he was the first Black Puerto Rican baseball player to hit 3,000 hits, but because he was also a civil rights leader off the field.

As a role model, his legacy as a civil rights leader is proudly celebrated in Pittsburgh in murals and taught to young kids in school.

His son, Roberto Clemente Jr., was shocked about the banner being stolen. He spoke to Payday Report about how little people’s views of racism have changed since his father died in the early 1970s.

“Everything that happened then is happening now,” said Clemente Jr. “To have people today feel that way about another human being goes to show that we still have a long way to go.”

Growing up in Pittsburgh, even as the son of a famous baseball player, Roberto Clemente Jr. said he still faced racism. When he was in the 9th grade in 1982, he was beaten by cops in the Pittsburgh suburb of Hampton Township.

Roberto Clemente Jr. said that it was time for a change in this country.

“I have had a lot of experiences in life where I know that we need to change how we recruit law enforcement,” he said. “We know there are groups out there that have beliefs and become very violent with their beliefs, and those are the same guys that are wearing the uniform today.”

He added that it’s necessary to question these groups’ positions within law enforcement.

He was excited to see the recent wildcat strikes in Major League Baseball in solidarity with Black Lives Matter. If his dad were alive, he said that he believes he would have been at the forefront of the movement.

He hopes that the recent wildcat strikes in support of Black Lives Matter movements will create a deeper dialogue about racism in America’s pastime.

“Baseball has to change in many ways; there is no hiding it, there is no other discussions, they need to sit down and listen because they don’t do much listening to what’s going on,” says Roberto Clemente Jr.