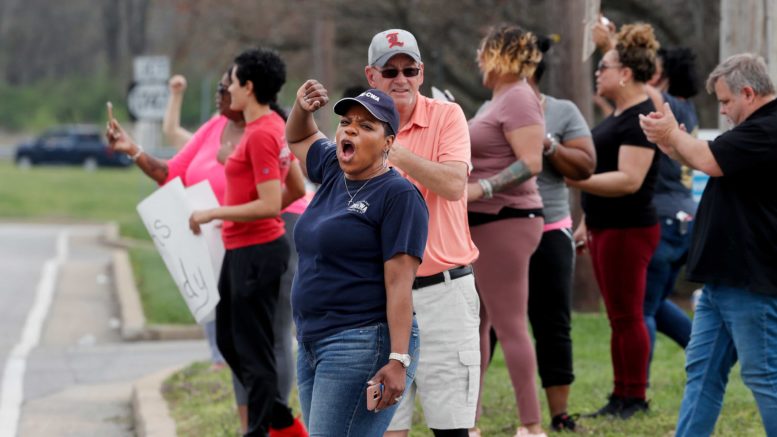 Greetings from the Burgh, where Payday appears to have received some late fundraising which means we’ve hit our $6,000 a month fundraising goal a few hours late.

To celebrate, we got a big Labor Day Picnic coming up this weekend that’s gonna be a major fundraiser. (Facebook invite link) to keep our tinder publication growing, donate today. Thank you!

Big news today comes out of Louisville, where over 3,800 GE Appliance workers voted to authorize a strike with 99% of the union voting in favor of it.

With the union’s contract set to expire on Sunday, workers could be on the street in Louisville as soon as Labor Day this Monday. Some workers at the plant make as little as $14 an hour.

During the pandemic, GE Appliances saw a surge in home appliance orders as homebound consumers focused on home improvement projects. Yet, the IUE-CWA that represents workers at the plant say that so far, the company hasn’t done enough to share the profits with workers at the plant.

“Do I feel like I need a raise? Yes, I do,” 59 year old GE worker Jerome Ingram told the Louisville-Courier Journal. “I like my job. I just want what’s coming to me.”

For more, check out the Louisville Courier-Journal.

The Andover School District has informed its teachers that it intends to take legal action against the union if it continues with its “safety strike” against the school. More from Patch:

The Andover Education Association said Friday its members voted to begin the school year working only remotely in light of the coronavirus pandemic, even after the School Committee approved a plan for some in-person learning at the start. Teachers gathered outside Andover High School Monday morning for what the union called a “workplace safety action.”

“The Andover Education Association might believe this is a ‘workplace safety action,'” district spokeswoman Nicole Kieser said in a statement. “It is, in fact, considered an illegal work stoppage. The Andover School Committee will meet in executive session at 4:30 p.m. this afternoon to discuss options for litigation, based on today’s activity by the AEA. Professional development in our school buildings for our educators will continue on Tuesday, September 1st.”

For more, go to Patch.

One group of workers on strike in Massachusettes include sex store workers employed at branches of Good Vibration in Brookline and Cambridge.

The strike, now entering its second week, pertains to the employers’ refusal to recognize their union Stand with SESCE.

“It has been two weeks since SECSE first walked out and sent their list of five demands to Good Vibrations,” said Stand with SESCE in a statement. “Two weeks of staggering community support both online and on the ground has kept us resisting the owner, Joel Kaminsky’s endless, empty platitudes and non-answers. Make no mistake, his attempts to drag out the strike instead of engaging directly with our demands nor our offered alternative of union recognition is an act of violence when our livelihoods depend on the strike fund.”

For more, go to the Stand with SESCE Facebook page.

COVID has set off a new round of union organizing within Amazon as scores of employees have started wildcat strikes at Amazon locations across the country. The company is so worried about union organizing that they are attempting to hire two intelligence analysts to track union activity:

The company recently posted two job listings for analysts that can keep an eye on sensitive and confidential topics “including labor organizing threats against the company.” Amazon is looking to hire an “Intelligence Analyst” and a “Sr Intelligence Analyst” for its Global Security Operations’ (GSO) Global Intelligence Program (GIP), the team that’s responsible for physical and corporate security operations such as insider threats and industrial espionage.

The job ads list several kinds of threats, such as “protests, geopolitical crises, conflicts impacting operations,” but focuses on “organized labor” in particular, mentioning it three times in one of the listings.

This Fall, California will vote on Prop 22. The ballot measure would force Uber, Lyft, and other ride-hailing and app companies to treat their workers as employees and not independent contractors.

In the lead up to the high profile site, the companies are now targeting many of the leading women, advocating against the measure in what many see as a targeted harassment campaign. Dara Kerr at CNET has the story:

Veena Dubal couldn’t stop her mind from reeling. It was around midnight on March 29 and coronavirus lockdowns were in effect. She says she paced back and forth between her three young children’s rooms making sure each one was OK. She tried to convince herself she was overreacting. It didn’t work.

Earlier in the day, she’d received a text message from a friend telling her to look at Twitter. Dubal, an employment labor law professor at the University of California Hastings College of the Law and a vocal critic of Uber and Lyft, opened the app. She’d been getting an unusual amount of hateful tweets over the past few weeks, but that didn’t prepare her for what she saw — her home address, salary and husband’s name broadcast on the social media site by someone she says had been one of her most relentless critics. “Our dear Veena may be hording (sic) a lot of clams,” read the tweet by @BlueUrpi in reference to Dubal’s salary.

“I kept thinking, ‘Oh my god, all of these crazy people on Twitter now have my home address and are going to do something horrible,'” Dubal says, still noticeably rattled several months later. “They know I’m at home. I’m a sitting target.”

That night, Dubal says she slept on the floor of her two eldest children’s shared room with a baby monitor close by. As she closed her eyes, she couldn’t stop thinking about the messages and tweets she’d been barraged with. “Vile Veena.” “Veena Dubal is insane! Let’s give her our piece of mind!” “She is a very annoying pest. Bring out some spray #veenadubal.”

For more go to CNET to read Dara Kerr’s landark ‘A totally different ballgame’: Inside Uber and Lyft’s fight over gig worker status”