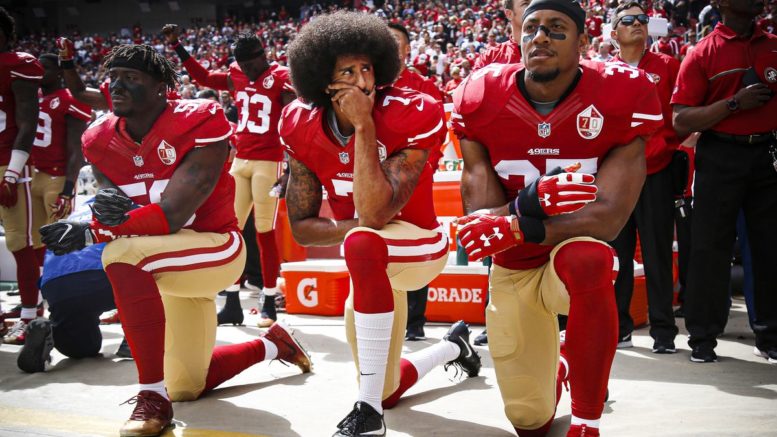 Greetings from the Burgh, where I’m going through my Annual pre-Labor Day freakout. So much work to do before Labor Day and Clemente Day next week. Phew, prayers up folks.

Donate though so we can take at least some time off and enjoy our Labor Day Picnic this weekend.

The NFL is slated to start on September 10th. However, it appears that the players may go on a wildcat strike and boycott the games in support of Black Lives Matter.

Today, the NFL appeared to give their legal blessing for players to break their union contract and refuse to play games on September 10th.

“[T]hey all have a choice, an individual choice and right to either sit out or protest, however one would characterize it,” NFL Executive Troy Vincent said during the players meeting today.  “My personal discussions with the players have been many and frankly with the club ownership and coaches, but in particular the players, and it’s really time for us to dig into when we talk about police reform and it’s really around the area of accountability, and how can we leverage from our office — our governmental affairs office. The players want to see us leveraging the influence to hold officers that are bad officers to be held accountable.”

For more, head to ESPN.

Kentucky Derby to Be Rocked by Protests This Year.

It also appears that the Kentucky Derby will be rocked by protests this year. The Washington post has a look:

Tensions over the Derby — as well as the juxtaposition between its colorful pageantry and the poverty of its surrounding community — have long existed. But 2020 sharpened that divide: When it appeared that a delayed Derby would still host nearly 23,000 guests, even as the city reeled from Taylor’s death and calls continued for charges against the officers involved, activists condemned the race and demanded its cancellation.

“What I don’t understand is how the city thinks we just go to some celebratory event while this city is hurting,” said Black poet and activist Hannah Drake, 44, who lives near the track. “To just go on like that didn’t happen, to me is a slap in the face.”

The race, now set for Saturday, will be run without spectators because of the public health risks amid the coronavirus pandemic. Officials’ unprecedented announcement in late August, which described the Derby as “a time-honored American tradition … about bringing people together,” did little to quell efforts to boycott or disrupt it.

“Most people in the African American community sort of look at that Derby thing as a time for richer, Caucasian members of the city to have a good time, spend their money and enjoy life,” Yashia Crawford, 38, said at a recent protest where dozens of people were arrested.

(#TBT, See Melk’s 2017 Dispatch for the Guardian from Protests at the Kentucky Derby Over The Abuse of Immigrant Workers)

Today, in Chicago a group of servers and bartenders called for a strike over the tipped minimum wage in the city being $6.00 an hour.

Restaurants workers in the city, many of whom have suffered greatly through layoffs and reduced tips because of COVID, say it’s time for a change. The workers have yet to set a date but plan on holding a series of strikes at restaurants in the city this fall if something isn’t done to increase wages.

“What we already know is how real the hustle is,” said Congressman Chuy Garcia, who is supporting the strikes. “It’s a struggle to fight for more hours and tips just to cover the rent and put food on the table.”

For more, go to WGN.

An exposé by Lauren Kaori Gurley and Joseph Cox at Vice reveals how Amazon has a sophisticated system to track the Facebook groups formed by their workers:

According to the files left online, Amazon corporate employees are getting regular reports about the social media posts of its Flex drivers on nominally private pages, and are using these reports to diagnose problems as well as monitor, for example, drivers “planning for any strike or protest against Amazon.” The reports have the full names and posts of drivers who post anything noteworthy in one of dozens of closed driver Facebook pages, intended for use by Flex Drivers. Here is an example of a report that was redacted by Motherboard.

Among the files left online is a document called “social media monitoring” that lists closed Amazon Flex Driver Facebook groups and websites across the world, as well as open Flex driver Subreddits, and the Twitter keyword “Amazon Flex.” Forty three of the Facebook groups are run by drivers in different cities in the United States.