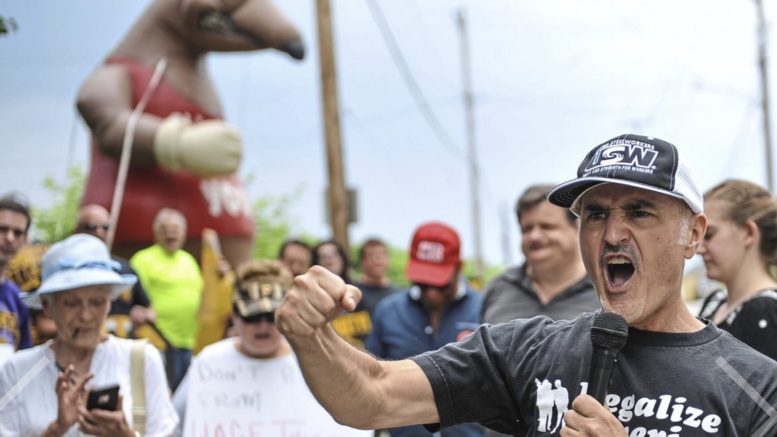 Guillermo Perez, President of the Pittsburgh Chapter of the Labor Council for Latin American Advancement leads protesters against Stapleton Homes, which has been accused of stealing wages for immigrant Latino construction workers (Andrew Stein/Post-Gazette)

O’HARA, PENNSYLVANIA  – Popping out of the luscious greenery along the banks of the Allegheny River emerges the head of a giant 15-foot tall brown rat in a red tank sitting on top of a 4-foot high chunk of cheese.

“For us, the rat represents Stapleton Homes,” says Guillermo Perez, president of the Pittsburgh chapter of the Labor Council for Latin American Advancement (LCLAA). “The rat represents a business model that exploits workers.”

The workers here have gathered to protest Stapleton Homes, owners of the Chapel Harbor luxury condos on the banks of the Allegheny, only 15 minutes from the heart of booming Downtown Pittsburgh.

Last summer, a family team of five roofers from Guatemala spent ten days in 100-degree heat roofing the condos as they were preparing to go on the market. When the team completed the job, the immigrant workers building the project were never paid the $5,000 they were owed.

“It’s just wrong,” says 27-year-old Guatemalan immigrant “Gladys” as her young toddler runs around playing in the grass. “We have kids, I have family. I have more family in Guatemala…It’s not fair that we didn’t get paid.”

On Saturday, the Latino workers, members of organized labor and concerned community members gathered near the entrance of Chapel Harbor to protest what they see as wage theft.

“We love our community along the Allegheny, but the one thing we don’t love is taking from workers,” says Chapel Harbor homeowner Kevan Yenerall, whose wife is an immigrant from Thailand.

Stapleton Homes did not return a request for comment about the incident.

The story of Gladys and her crew is one that’s becoming increasingly common as Latino immigrants show up to take advantage of the massive building boom set off by Pittsburgh’s tech and natural gas boom.

Many immigrants say they prefer construction work to other types of work available to them.

“I used to work in the restaurant industry, I didn’t like it, and so I decided to try this,” says Gladys. “There is more independence.”

However, Latino workers in Pittsburgh often experience wage theft and are chronically underpaid compared to their unionized counterparts. Gladys says members of her crew on average make only $800 a week while working 12-15 hour days often in the heat on top of roofs.

Now, the areas’ unions are trying hard to organize workers regardless of immigration status and documentation.

“If we don’t step up and keep the pressure on [these contractors], they are just going to keep doing it,” says Joseph Hughes, a union representative with Painters’ Union District Council 57.

“I see this every day, thousands of contractors around the state of Pennsylvania do this everyday. This isn’t an isolated problem” Hughes tells the crowd.

Among the crowd, that day on the side of the highway in O’Hara Township, Gladys and her crew of a half-dozen roofers were some of the few Latino faces in the crowd of 50.

As a result of the economic downturn in Pittsburgh in the 1980s and 90s, which saw half the population of Pittsburgh leave, there was never as large of an influx of Latinos as in other areas of the country. In Pittsburgh, Latinos make up only 1.7 percent, while 17.6 percent of the U.S. population is Latino.

The crowd of supporters at the protest was mainly white, but numerous speakers in the crowd said they feel a sense of solidarity as their parents and grandparents worked similar jobs when they came to Pittsburgh from Southern and Eastern Europe in the early 1920s.

“This is such an important issue because it hits home to me. Both of my parents were immigrants that came [from Italy] after World War Two and they meet learning English at Allderdice High School,” says Anita Prizio, a 54-year-old DSA member who was recently elected to County Council to represent the region around Chapel Harbor.”

“My parents built the house that I still live in and they also created a company [that I run], but the one thing they told me and I learned this is that to be a good business owner, you have to be an ethical business owner, you have to have integrity and you have to pay your workers,” says Prizio. “There were times that it was hard for my parents to make payroll, but the first thing they did was to pay the workers before they actually paid themselves.”

The campaign marks the beginning of new efforts by the area’s construction unions and community groups to combat the growing trend of wage theft facing workers. Recently, the Painters Union even donated a new sign to Casa San Jose, a Latino Resource and Welcome Center founded by the Sisters of St. Joseph in the growing Latino community of Beechview.

Unlike other cities with large Latino populations, Pittsburgh currently doesn’t have a workers’ center for non-union workers, where low wage workers win claims against employers that fail to pay them on time.

While groups are pushing for the establishment of a worker center, the task has fallen to an ad hoc coalition of activists associated with the LCLAA, building trade unions, area labor lawyers and the Thomas Merton Center community group. Gladys says support from these groups has been uplifting as a new member of the Pittsburgh community.

“I feel very welcomed by the community,” says Gladys. “We appreciate the support.”

The embrace by organized labor is part of a larger shift occurring nationally as building trade unions begin to embrace immigrant labor as opposed to keeping them off out of workplaces.

While activists associated with the Labor Council for Latin American Advancement say they would like to see unions and other groups step up to fund a workers’ center, they say that the protests have been a learning experience for the Pittsburgh community.

As the protest ends, Perez takes the microphone and taught the yinzer crowd a few words of Spanish.

When we fight, we win.