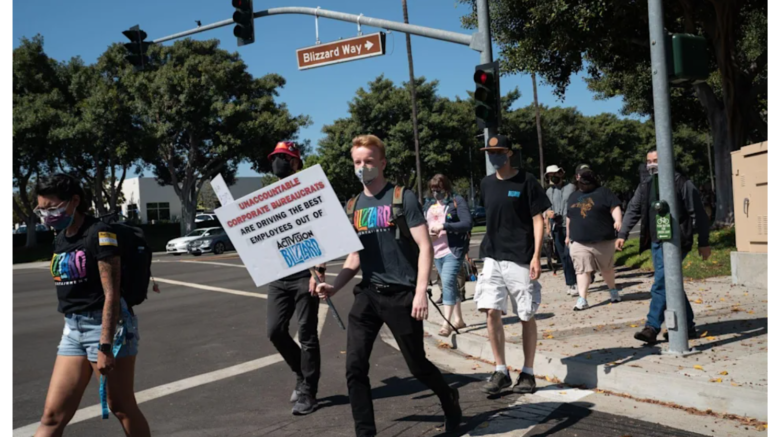 Greetings from the Burgh, where it’s been a very busy day as Payday Report prepares to drop a major story tomorrow morning.

In California, 300 video game workers have decided to walk in solidarity with co-workers, who had been sexually harassed at the video game maker Activision Blizzard:

The California Department of Fair Employment and Housing last week sued Activision Blizzard, one of the largest video game companies in the world, which makes popular titles including World of Warcraft and Call of Duty, alleging that the company has a “pervasive ‘frat boy’ culture” in which female employees are sexually harassed and are paid and promoted less than their male counterparts. After the lawsuit was filed, several former employees shared further allegations of harassment and discrimination on social media, while dozens of current employees expressed their solidarity with the women whose allegations were featured in the lawsuit.

“We know people across the company who have been complaining about these issues for decades or who have made allegations and have not been listened to,” said Valentine Powell, a software engineer who is one of more than 300 employees involved in organizing the protest. “The lawsuit and the company’s response to it was the match that lit the powder keg.”

For more check, out NBC News.

“A lot of these folks here, they can’t afford to live in the community that they serve,” John Ertl of [Amalgamated Transit Union] told C-Ville. “A lot have to work multiple jobs. These folks have given it their all through the pandemic, Nazi rally, snowstorms…even though they have to drive in from distant counties to make it here.”

For more, check out C-Ville.

In 2013, the Teamsters were initially defeated when they tried to unionize at Dr. Pepper’s factory in Victorville, California. Now, on their second try, Teamsters Local 896 has won by a margin of 129 to 112.

With a divided workplace, Dr. Pepper is likely to try to divide the workers as the union will likely struggle for many years to get a contract. However, the Teamsters say that they are prepared to fight for a second contract.

“If the company thinks they’re just dealing with Victorville with this, then they have a huge surprise coming their way,” Phil Cooper, secretary-treasurer of Teamsters Local 896, told the Daily Press. “This is too important to every other Keurig Dr Pepper facility in California to not get a good contract for these people.”

For more, check out the Daily Press.

This week, 235 skilled trades workers, members of the IFPTE, have gone on strike at Lawrence Livermore National Laboratory in California.

“We’re all skilled trades. We’re electricians, plumbers, carpenters, sheet metal workers, welders, boiler guys, handling heavy equipment, security alarms, fire alarms,” IFPTE chief bargainer Steve Balke told the Pleasanton Weekly. “We might be a small group but we are an integral part of this lab. We want them to know that, because right now they don’t treat us that way.”

For more, check out Pleasanton Weekly.

Finally, it is with a heavy heart that Payday learns that the crusading journalist Glen Ford, Co-Founder of the Black Agenda Report, has died at age 72.

“My dear brother Glen Ford has passed! He kept alive the highest standards of truth-telling and justice-seeking of the Black radical tradition,” wrote Cornell West on Twitter. “He was a giant in revolutionary vision, analysis and praxis! We should never forget him!”

I had the opportunity on a few occasions to collaborate with Ford and exchange ideas and emails with him. He was daring and courageous and I admired him deeply.

May his memory always be a blessing for folks daring to the truth no matter how unpopular.