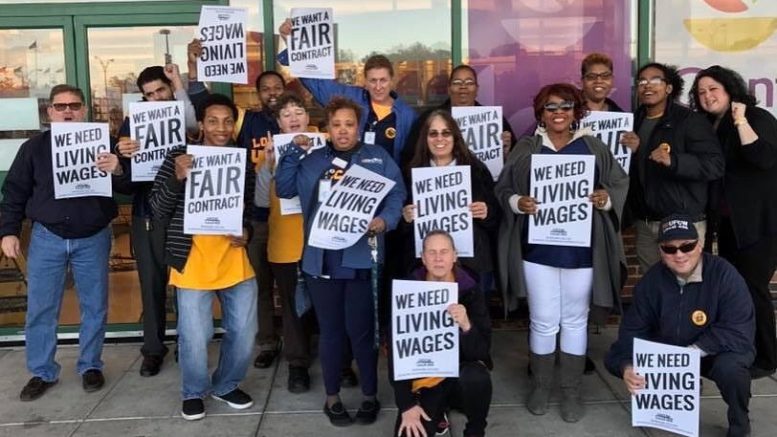 America’s last line of defense is about to kick in—unionized federal workers in DC who know how to shut bullshit in the federal government down real well.

Speaking of shutting it down, 25,000 grocery workers at Giant and Safeway in the D.C. – Baltimore region may go on strike next week if they can’t reach a contract. The union hopes to have a contract to present to its membership at its general meeting on November 16.

However, the local, in an announcement to members, warned that they will not settle for a bad contract and have reserved the option to strike when their contract expires on November 18.

“In order to keep all options on the table, we have given notice to both companies, as required under our current contract extension, to cancel the extension in 14 days” the local said in a letter to members. “This means the current contract will remain in effect for the next 14 days and will expire on November 18. In the meantime, we will continue making every effort to reach a fair deal with Giant and Safeway.”

As “Right-to- Work” Heats Up, Could Frankfort, Kentucky Become the New Madison?

After having a Democratic majority in the state House of Representatives for 95 years, the legislative body in Kentucky flipped this week with 17 Democratic incumbents including House Speaker Greg Stumbo.

Republican Kentucky Governor Matt Bevin celebrated Stumbe defeat by telling him “good riddance.” Bevin has signaled that one of his first priorities would be to pass “right-to-work.”

Kentucky, with over 200,000 union members, is currently the last state in the South to not have right-to-work laws. The potential of stopping right-to-work could mobilize tens of thousands of union activists across the South to come and help stop the bill from passing. Even if they don’t win, many Kentucky union activists feel that the mobilization could help their organizing efforts in the state.

“We have to figure out how to grow off of this issue” says Kentucky AFL-CIO spokesperson Delane Adams.

Kentucky-based Railroad Workers United Co-Chair and Payday Folk Labor Ombudsman J.P. Wright says that while Southern union activists may be able to defeat the measure by themselves, it would help if some Yankees come down and fought with them as well.

“Here in Kentucky, us Kentuckians hide behind trees and bushes waiting for Northern reinforcements, but they don’t seem to be coming,” J.P. said in an exclusive interview with Payday Report. “We Southern boys, though, we know how to fight. So we may just have to kick some ass by ourselves.”

If interested in coming to Kentucky for the fight back, email [email protected] and we can make sure you know where all the best bluegrass and bourbon spots are in the good ole’ Commonwealth of Kentucky.

In a show of strength for the growing labor movement in the South, union activists defeated Amendment 1 in Georgia by a margin of 60-40. The defeat of the measure was a huge setback for Gov. Nathan Deal’s Opportunity School District program, which would have allowed the state to take over schools that performed poorly on standardized tests.

“Georgians sent a clear message to Governor Deal and other stakeholders-we need to make changes to our public education system, but the current plan isn’t working” says Turner.  “We need to develop a new roadmap through an inclusive process where the focus is not on testing alone but on making the improvements essential to helping all students acquire the knowledge and skills they need for success in the 21st century economy.”

The failure of the ballot measure means that in order to repeal right-to-work in Virginia, the state Legislature would simply have to vote in one session to do so. However, Virginia’s Democratic Gov. Terry McAuliffe is currently on record supporting right-to-work, so it’s unclear if a movement will emerge any time soon to repeal the current restrictions in place in Virginia, where unions are growing.

Thousands of Federal Workers Expected to be Fired

“I think it’s fair to say federal employees are going to be facing a number of challenges ahead,” Tony Reardon, president of the National Treasury Employees Union told the NewsGuild-represented Washington Post. “We’re going to have to work really hard to educate the new administration about federal employee issues and the support they need to perform their mission on behalf of the American public.”

Taking to facebook after the victory of Donald Trump, Western Pennsylvania native and Washington Post NewsGuild Union Co-Chair Freddy Kunkle gave his insight on the share of blame the media deserves for Trump’s election:

If we in the media are in any way responsible for the election’s outcome, to my mind it’s by virtue of our longstanding upper-middle-class, left-leaning bias. It’s almost not worth debating anymore, and it’s not the result of a plot or conspiracy directed from above, and it’s not new.

But it’s newsroom after newsroom filled with people from the same socioeconomic class and background who think the same thoughts and share the same beliefs and have become more and more openly hostile to those who don’t.

(Does anyone doubt that a rough consensus exists in most metropolitan newsrooms on issues such as immigration, gun control, capital punishment, abortion rights, school prayer, gay rights or Obamacare? Or that social media has become the preferred way to police that consensus?)

And so a huge part of the country long ago tuned us out — or found an equally or more biased alternative — and began to discount and disbelieve a huge amount of what we were telling them.

Braden was the author of the 1958 National Book Award finalist The Wall Between, her account of the criminal trial her family faced for helping a black family buy a house in a white neighborhood in 1954 Louisville. Braden is remarkable in her emotional empathy and the understanding she shows to the people that prosecuted her. The Anne Braden award seeks to honor journalists that seek to tear down the walls between groups of people and understand them.

Payday is proud to award Alec MacGillis our first monthly Anne Braden award for his piece “Revenge of the Forgotten Class.” A native of the bombed-out mill town of Pittsfield a city forgotten by General Electric, MacGillis spent months in the Rust Belt talking to Trump voters and getting to know them on a personal level.

A few days after the release of the tape, which was followed by a string of accusations from women saying they had been sexually harassed and assaulted by Trump, I checked back in with Tracie St. Martin to see if she still supported him. She was working on a new gas plant in Middletown, a working-class town near Dayton that was the setting of the recent best-selling memoir “Hillbilly Elegy.” Here’s what she wrote back in a text message: “I still appreciate the honesty in some of his comments. Most of his comments. I still favor what he says he may be able to do. I am voting against Hillary, come what may with Trump. It’s important to me that ‘we the people’ actually have political power. And electing Trump will prove that. I am AMAZED at the number of people voting for him. The corruption is disgusting in the press. Yes, as of right now I am voting FOR Trump.” She was sure he would win, she said: “His support is crazy! The polls have to be wrong. Have to be fixed.”

And she shared an anecdote that reflected how differently Trump’s comments had been received in some places than others. “I’m setting steel for this new gas plant…I’m operating a rough terrain forklift,” she wrote. “So today, I kept thinking about the debate and the audio was released … And I got underneath a load of steel and was moving it…I was laughing and laughing and one of the iron workers asked ‘what are u laughing at.’ I said ‘I grabbed that load right by the pussy’ and laughed some more…And said ‘when you’re an operator you can do that ya know’, laughed all fucking day.”

Just last week, I was back in Ohio, in the southeastern Appalachian corner. I was at a graduation ceremony for opiate addicts who had gone through a recovery program, and sitting with four women, all around 30, who were still in the program. Someone mentioned the election, and all four of them piped up that they were voting for the first time ever. For whom? I asked. They looked at me as if I had asked the dumbest question in the world. All four were for Trump.

Go read the full piece over at ProPublica.

That’s all for today folks, be sure to donate to Payday Report so we don’t have to get a side job to keep putting this out every week. It’s Payday folks, we know you got the money, keep on giving.

A protege of the late Bill Greider, Mike Elk is an Emmy-nominated labor reporter who covered the labor movement & the drug war in Brasil and spent years covering union organizing in the South for The Guardian. In 2016, he used his $70,000 NLRB settlement from being fired in the union drive at Politico to start the crowd-funded Payday Report. The son of United Electrical Workers (UE) Director of Organization Gene Elk, he lives in his hometown of Pittsburgh. Email: [email protected]