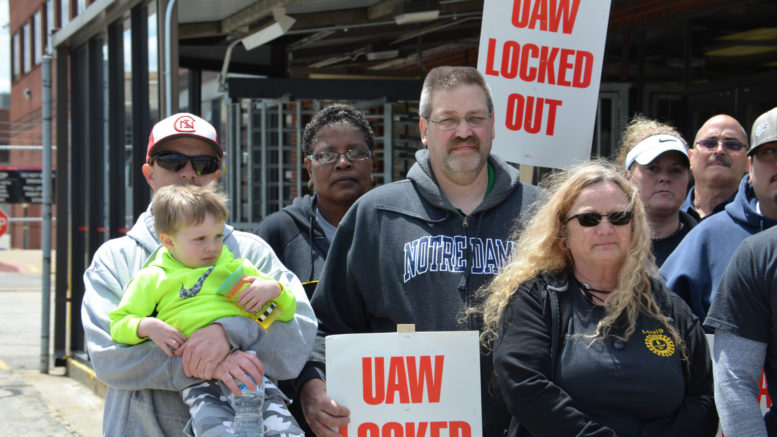 Locked Out Honeywell Workers in South Bend, Indiana enter the 6 month of their lockout (UAW Local 9)

This week’s Lunch Pail goes out to the 400 UAW members at Honeywell, who voted 192-112 this week to reject a proposal which would have ended a six-month lockout in Indiana and New York.

Be sure to check out Nate’s new book, Able Archer 83, about a 1983 NATO training exercise that almost started a nuclear war with the Soviet Union. The book is based on nearly 12 years of work by Jones seeking to declassify documents.

In an interview with The Seattle Times this week, International Association of Machinist Union organizer Mike Evan says the union only needs 102 more signatures before they are willing to call for a union election at Boeing’s 3,000-worker plant in North Charleston, South Carolina.

If the union were to prevail, it would be one of the largest factories in the South to go union in a generation. Currently, non-union Boeing workers at the plant make $22.65 an hour while unionized workers in Everett, Washington make $38.61 doing the same work.

The race for the presidency of the 1.4 million-worker Teamsters union looks like it will end in victory for the 17-year incumbent President James P. Hoffa. Though final vote tallies are not yet complete, Hoffa is narrowly edging Teamsters United reform slate candidate Fred Zuckerman of Louisville, Kentucky. Currently, Hoffa leads Zuckerman by a margin of 100,942 to 94,975 votes.

While Zuckerman won a majority of the votes in the US, Hoffa was put over the top after he walloped Zuckerman in Canada by a margin of 9,521 to 2,863.

The Teamsters United slate vows to challenge the results in court.

“Hoffa-Hall used union resources to obstruct corruption investigators and deny Teamsters a fair and informed vote, in violation of the Election Rules and federal law,” said Zuckerman in a statement. “We have filed election protests and we will pursue every legal remedy at our disposal”.

If the challenge is successful, a federal election overseer could order a revote.

This week, 1,200 airline mechanics at UPS, members of Teamsters Local 2727, voted by a 98 percent margin to call for a strike. The workers are threatening to strike over unsafe working conditions and increases in health care contributions.

“We’re glad that UPS can afford to invest in beefing up its international fleet,” said Jim Kelley, an aircraft mechanic at UPS’s Worldport facility in Louisville, Kentucky in a press release. “But if UPS can afford major capital investments and huge raises for top brass, then UPS can also choose to invest in the maintenance workers who do strenuous and dangerous work every day to make its success possible”

The possible strike could test whether or not Trump is the friend of workers that he claims to be. Under the Railway Labor Act, President Trump would have the power to stop the strike.

Last week, Payday reported that 17,000 workers in D.C. were threatening to strike at Giant and Safeway grocery stores throughout the D.C. and Maryland region. Now, it appears that the strike has been averted at both outlets.

On Wednesday, members gathered at the D.C. Armory and voted to ratify the new contracts. The new contracts include higher starting pay rates, more frequent scheduled wage increases, and no increase in health care contributions.

For the past 6 months, Paul Blest at Indy Week has been on the tails of the story of North Carolina state Sen. Brent Jackson, who has been accused of wage theft by seven H-2A guest workers. Now, the U.S. Department of Labor has fined Jackson, though the fine is so small that it is likely to do little to deter future lawbreaking.

Indy Week has the story:

[Jackson] was ordered by the DOL to pay twenty-one workers a total of $2,180 in back wages and promise to never do it again.

The INDY has requested records regarding how, exactly, the DOL reached that number, as well as for more information about the nature of the violations. That request has not yet been fulfilled. But considering the history of wage and safety issues at the farm—including the permanent disability of a worker in the late 1990s who suffered a heat stroke and wasn’t taken to the hospital—an average of $103.81 for each worker seems paltry.

“We know there’s been ongoing violations at that farm, particularly since he got out from under the union agreement,” says Farm Labor Organizing Committee vice president Justin Flores, referring to the Jackson Farming Company leaving the North Carolina Growers Association, which has a union agreement with the FLOC, at the end of 2014. “We’re hoping that more workers like his decide to come together and request better working conditions and keep growers in compliance with the law through collective bargaining.”

Speaking at the Autistic Self-Advocacy Network Dinner at the National Press Club Wednesday night, Obama-appointed EEOC Commissioner Chai Feldbolm praised at length the work she had done with fellow EEOC Commissioner Victoria Lipnic, who has been reported to be one of the picks Trump is considering for Secretary of Labor.

“In the last six and half years when I was in the majority [at the EEOC], I reached out always to my Republican colleagues and commissioner Vicky Lipnic, who was a Republican commissioner, who worked me with on regulations” said Feldbolm. Other names in consideration for Labor Secretary are long-time enemies of labor, including Hardees and Carl’s Jr. CEO Andrew Puzder and Wisconsin Gov. Scott Walker.

Labor Lines Up Solidly Behind Keith Ellison for DNC Chair

“When Keith was attacked for supporting the Employee Free Choice Act he ran ads on radio about why he supported workers. He wore his values on his broad shoulders,” says Tennessee native and former AFL-CIO Organizing Director Stew Acuff. “He’s not a shill. He’s an American of love and compassion and he deserves your support.”

One of the groups with the strongest ability to push back against Trump is the grassroots network of Bernie Sanders supporters called Our Revolution, whose board is chaired by former CWA President Larry Cohen.

In an exclusive interview with Payday Report yesterday, Former CWA President Larry Cohen called on unions to prepare to organize in settings without a functioning NLRB and without NLRB rights. Cohen called on unions to model their efforts after the decades-long support CWA has given to the 1,500 dues-paying members of United Campus Workers union in the University of Tennessee system.

“It’s a struggle convincing people to put some of their resources into minority unions especially when they are stretched” said Cohen. “The problem is labor is going to be on defense”.

Volkswagen Union Could Be Scrapped by Trump NLRB

One union that could suffer greatly by Trump’s promise to shake up the NLRB is Chattanooga’s UAW Local Union 42. Last February, the union won an election for a unit of 180 skilled mechanics at Chattanooga’s Volkswagen plant by a margin of nearly 2-to-1. The union took advantage of a new “micro unit” rule initiated by Obama’s NLRB, which lets unions organize only specific parts of workplaces instead of undertaking the often herculean task of organizing the whole workplace.

Currently, Volkswagen is refusing to bargain with the union and challenging it in court. However, if Trump scraps the micro union rule all together, the union could be made void under federal labor law.

“My guess is that Trump will appoint completely regressive Board members who will never accept the concept of [micro unions],” says University of Wyoming Law School Professor and former NLRB attorney Mike Duff. “As to what unions should expect – the NLRB will go backwards on every issue it went forward on in the last couple of years.”

Finally, Nashville News Channel 9 has the sad story of former Chattanooga-area state Sen. Jim Albright, who is dying from mesothelioma caused by nearly four decades of asbestos exposure as he labored as a construction worker:

Albright admits he can’t properly say the name of the disease that is taking his life.

“If I stay around long enough, I’ll learn to pronounce that thing,” he jokes.

He’s filed lawsuits to hold his former employers accountable for cutting short the “good life” he planned for himself many years ago.

“There’s no cure for what I have. And you’re going to die. It’s just a matter of time,” he says.

Albright’s case is still pending. He tells us his doctor estimates he has another six months to live.

Labor lawyer Moshe Marvit has a long look over at the American Prospect at how new rules on limiting pretrial discovery could hurt workers rights.

The new rules enacted on December 1 do exactly the opposite by changing the standard from one where a party can get anything that is “relevant” and not privileged to a “proportionality” test. This new test shifts the focus from getting at the truth of the matter to whether the costs and burdens on the defense are too great to get at the truth. Gone is the presumption that a plaintiff is entitled to the information that affects her case. Now she must also prove that it is not too much of a burden on the other side to provide this information.

There’s been plenty of questioning, reporting, and discussions since election day of exactly why the Democrats and Hillary Clinton lost the backing of once blue counties in Appalachia. Read or re-read this piece from 2014, by West Virginia lawyer and writer Chris Regan, who dissects why workers in his state dropped their loyalty to the Democratic Party in 2014’s midterm elections.

The Labor and Working Class History Association has a post critiquing The Guardian’s depiction of McDowell County, West Virginia as the epitome of Trump’s America, while failing to mention that Bernie Sanders was far more popular than Trump during the primaries.

Check out this Labor Notes guide on how to make union meetings interesting.

Iran’s veteran labor activist Esmail Abdi will be going back to prison, having been released briefly following a hunger strike. The International Campaign for Human Rights in Iran has an update.

That’s all for today folks, be sure to donate to Payday Report so we don’t have to get a side job to keep putting this out every week. It’s Payday folks, we know you got the money, keep on giving.