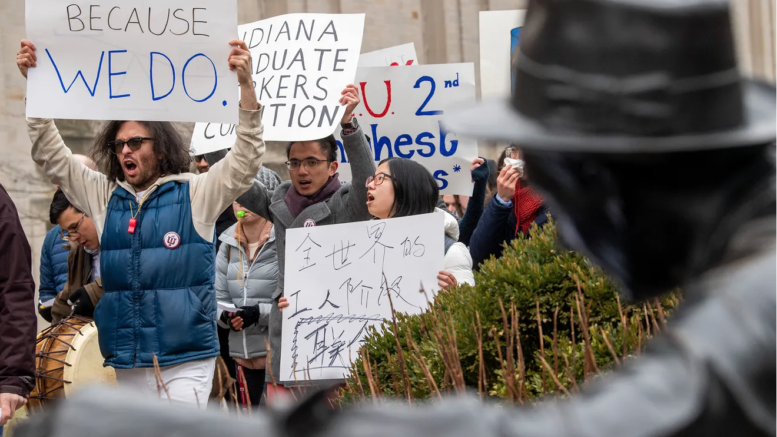 Greetings from the Burgh, where it’s been a very exciting day as Starbucks workers in Pittsburgh’s Bloomfield neighborhood voted unanimously to unionize by a margin of 20-0.

Only 17 Recurring Donors Short of 700

Please, consider showing your support for Payday Report and sign up as a recurring donor today.

You can also make a one-time donation here.

Today at Indiana University, 2,500 recently unionized graduate employees, members of the United Electrical Workers (UE), went on their first-ever strike against the university.

The workers demanded higher wages and better treatment from the Republican-appointed administration.

“I’ve seen lots of my colleagues have to take second jobs … they sell their plasma and they can’t then dedicate themselves to teaching in the way they’d like to, they can’t dedicate themselves to their research the way they’d like to and this affects all of us,” graduate student worker Sam Smucker told WHAS. “What’s happening here is really a disaster. People are not getting their value out of coming to Indiana right now and we need to change that and the grad employees are ready to do that, we’re ready to take that stand.”

In solidarity with the strikes, hundreds of faculty members are refusing to do the work of the striking graduate student employees.

For more, check out The Chronicle of Higher Education.

Over 600 Kansas Painters Union Strike
In Olathe, a city in the Kansas City area, over 600 painters are on strike after the local Builder’s Association offered them a 1% pay raise.

“Tonight the members of IUPAT Local Union 2012 have overwhelming [sic] voted to authorize a strike,” said the union in a statement. “Our members answered the call to work during the height of the pandemic, putting their and their families safety at risk as they went to work every day without complaint.”

For more, check out this segment from the local TV station KCTV.


CNN Only Aired 5 Minutes of Amazon Unionization Coverage
A new study by Media Matters shows that CNN only devoted five minutes of coverage to the historic union victory at Amazon on Staten Island.

The segment ran for five minutes during a news show on Sunday at 6 a.m.

For more, check out the Media Matters study here.


Amazon Union Busting PR Firm Also Does Work For Unions Finally, a new exposé in The Lever shows that Amazon’s PR firm Global Strategy Group has many union clients and democratic-elected officials. From The Lever:

In addition to its Democratic clients, the firm has also worked for a number of labor unions in recent years — including the National Education Association, the International Brotherhood of Carpenters New England Regional Council of Carpenters, the Actors and Artistes of the AFL-CIO, the International Brotherhood Of Electrical Workers Local 98 in Philadelphia, the SEIU Local 775 in Washington state, and the ​​American Federation of School Supervisors Local 1 in New York, according to Department of Labor records and federal campaign finance reports.

The Lever contacted all of those unions to ask whether GSG’s work with Amazon would affect their relationship with the firm going forward, and none responded.

Two unions that were listed on GSG’s website as clients last fall, but have not worked with GSG for several years, said they would not work with the firm in the future.

For more, check out The Lever.

Alright folks that’s all for today. We are only 17 recurring donors of 700 articles.

Be the first to comment on "2,500 Indiana Graduate Employees Strike –  600 K.C. Painters Strike – CNN Only Did 5 Minutes of Amazon Union Coverage"