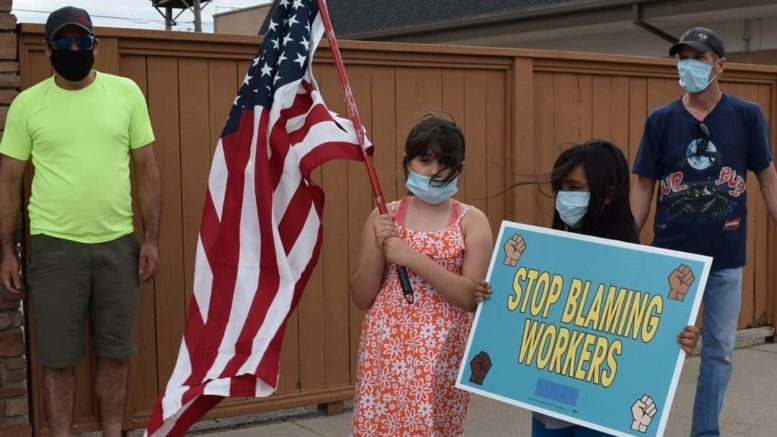 Greetings from Pittsburgh, where we want to bring you a quick update as we start the week.

173 Strikes Including a Walkout At Costo

We also discovered a walkout that happened at a Costco in the Bay Area after some barriers for social distancing were taken away in the store.

With deaths still climbing in the United States and some states already beginning to reopen, we expect that strikes will likely increase.

On our map we have begun tracking (in yellow markers) where strikes may occur. Keep sending in the links to [email protected].

Donate to help us keep tracking them.

Industrial actions are taking different actions across the United States. While not all strikes are fully shutting down plants, many plants are slowing down production as management tries to placate workers’ concerns (although it’s unclear if it’s enough).

UFCW Local 293 says that they are seeing improvements at the JBS meat processing plants in Grand Island, Nebraska including dividers, separation equipment, and personal protective equipment. Still, the company is reporting high rates of absenteeism and having to slow down production.

However, even at meatpacking plants such as JBS’s in Grand Island, the company says it’s seeing high rates of absenteeism; suggesting, as union officials allege, that there’s still fear among the workforce.

“JBS Grand Island has experienced reduced production due to increased absenteeism at the facility, but it remains open and operational with attendance improving,” JBS spokesperson Nikki Richardson told the Grand Island Independent.

Some bosses are trying to keep workers in the plants by offering them bonuses for attendance.

The CDC also said some companies have created policies that encourage workers to clock in even if they are sick by tying bonuses to attendance. As HuffPost reported in March, Sanderson Farms, the third-largest poultry producer, offered employees a $1-per-hour bonus, but only if their attendance was perfect.

Another issue inside plants is communication. Many workers are immigrants and refugees with a limited grasp of English, and some plants include dozens of different languages among the workforce ― including 40 at a single facility. Many workers are not getting safety information in their native languages, the CDC found.

Last week, workers at a Smithfield plant in Crete, Nebraska went on strike after 50 of their co-workers tested positive. Smithfield refused to close the plant for two weeks and continues to operate it.

This weekend, workers and the children of workers protested outside of the meatpacking plant.

“When are we going to stop? When 300 people are sick? Is that where the COVID is going to stop,” said Sheila Balbuena, whose parents are working at the plant.

“We would rather not eat meat for weeks or even months as long as everyone’s safe and the prices decrease,” said Yesenia Regalado, whose parents are working at the plant.

“I haven’t been able to hug my mom in the past two weeks because she’s worried she’s going to affect any of us if she has it, you know,” said Emmanuel Sanchez-Mora, whose parents are working at the plant.

Emmanuel Sanchez-Mora, a graduate from UNL, says it was the income his parents made from working at the plant that got him his degree.

For more, including video go to KLKN-TV.

Finally, for all the baseball fans out there, ESPN has cut a deal with the KBO League.

The games will be broadcast live with English Commentary starting at 10 PM Pacific Time, 1 AM EST tonite.

Many have compared the level of play to higher than “AAAA”, slightly better than AAA baseball, but not quite as high as MLB play. Over 30 former major leaguers are playing including former Pittsburgh Pirates starter Nick Kingham.

Several top prospects, who have struggled breaking into the major leagues, have gone to Korea to turn around their careers and come back, including the National’s Eric Thames, Diamondback pitcher Merrill Kelly, and Josh Lindolm who signed a 3-year deal with the Brewers this offseason after having a 3.53 era over 3 seasons in Korean Baseball.

Jeeho Yoo, the baseball beat writer for the English language Korean Daily Yonhap News, has a preview of the season and what the exposure means for Korea.

That’s all for today folks – donate so we can keep covering the growing strike wave across the US.