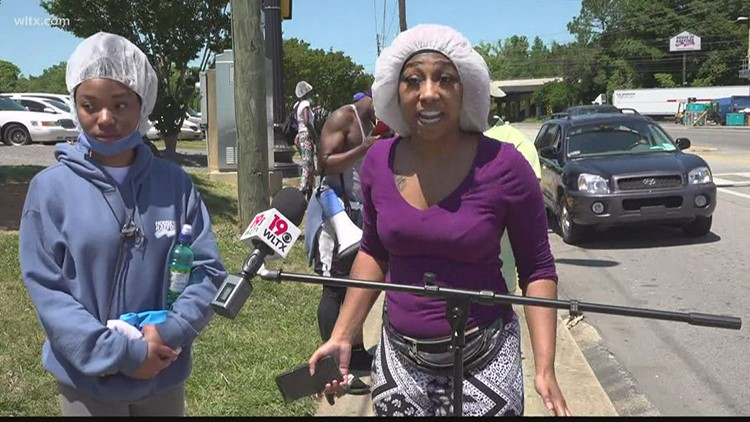 Folks, Greetings from the Burgh, where Melk is recovering from an allergy-induced respiratory infection.

As a freelancer, I rely heavily on crowdfunding, which peaks when I publish articles. I hesitate to take days off when I’m sick.

If you can, please donate today, so I can afford to take a few days off when I’m sick. Donate here.

A quick update, there are now over 184 Strikes up on the Strike Wave Map including chicken workers in South Carolina, hand sanitizer manufacturers in Oregon, and sanitation workers in NOLA.

Check out our map.

Even in industries that are booming because they produce safety products, employers are taking advantage of the crisis to demand concessions from employees.

Teamsters employed at Hood River Distilleries in Oregon walked off the job after their employer tried to cut their wages.

“Hood River Distillers’ deplorable action to unilaterally implement a contract during this COVID-19 pandemic that would slash the health and welfare benefits, reduce retirement security and offer little to no wage increases to offset their proposed reductions in other areas of the labor agreement is a flagrant example of an employer putting profits before people!” said Teamsters Local 670 in a statement released by the union.

“We are not getting the proper equipment to work in,” strike leader Gregory Woods told WDSU. “We are out dealing with toxic waste every day and they are always rushing us”.

“Everything is bad here. They just need to fix this,” said Williams.

“They are making millions of dollars, millions and paying us pennies on the dollar that’s why I’m out here.” said striker Godfrey Miller. “I’m out here for me, my co-workers, and anybody who deserves to be treated like human beings.”

However, like many employers, who are finding it easy to work find workers in a tough economy, House of Raeford simply chooses to fire the 12 workers.

“They didn’t even talk to us. The first thing they said was that we were fired,” one worker told WLTX.

To watch some good interviews with the workers, go to WLTX in Columbia.

This week, a federal judge ruled that meatpacking plants can continue to operate even if they aren’t in compliance with federal guidelines.

Workers though weren’t deterred and pledged to take matters into their own hands.

“While we disagree that Smithfield has implemented sufficient changes to address workers’ concerns and protect their safety, any changes that have been implemented are the result of the courageous workers who came forward to demand better from the company,” David Muraskin, litigation director for the Public Justice Food Project and counsel for the workers, said in a May 5 statement.

“Their unprecedented stand for workplace safety has resonated across the entire meat packing industry,” Muraskin said.

For more, on the ruling check out Fatima Hussein’s worker at Bloomberg.

72 UFCW Members Have Died of COVID

According to new statistics released by the UFCW, at least 72 union members have died of COVID-19 either in meatpacking plants or grocery stores, which they represent. (Note: the vast majority of grocery and meat processing workers are non-union so the numbers of death in the occupation are much higher).

50% of Pork Production Shut Down

With conditions so dangerous, workers have gone on strike or “sicked out” en masse to shut down plants across the United States.

This week, Tyson reported that nationwide 50% of pork production was shut down. And, Wendy’s says that 1 in 5 of their stores have no beef. ationwide Kroger is desperately seeking to stock its 1,700 stores with Impossible Burgers, suspecting that the meat shortage will intensify.

Over at Prism, ace reporter Tina Vazquez looked at conditions in the meatpacking industry in Central North Carolina:

Over the last two weeks, the number of confirmed COVID-19 cases has exploded in rural Central North Carolina, where meat processing plants like Mountaire [Farms]’s dot the landscape. According to one Chatham County hospital worker who spoke to Prism on condition of anonymity because they did not have authorization to speak to the media, large numbers of workers and their family members are showing up to health care facilities infected with COVID-19 and the disease has now spread far beyond the confines of processing plants.

“The numbers these companies are reporting to the public don’t make sense. The plants aren’t being open about the numbers,” the health care worker said.

While the companies that own these facilities are publicly reporting relatively low numbers of confirmed COVID-19 cases, data released by public health officials tell a different story. In Chatham County, cases have tripled. In Lee County, cases have multiplied by nine-fold. Across the state, rural areas have confirmed cases in the triple digits, in some instances rivaling counties that encompass North Carolina’s largest cities.

The public only began to get a true glimpse of the outbreak last week when Piedmont Health Chief Executive Officer Brian Toomey confirmed to local media that Chatham County has seen a “huge spike in positive results” at their community health center in Siler City, coming from Mountaire Farms, Tyson Foods, and Pilgrim’s Pride. Last week in Siler City, after just two days of testing Mountaire workers, 74 new COVID-19 cases were confirmed.

For more, go to Prism.

That’s all for today. Donate so we can afford to take sick days.