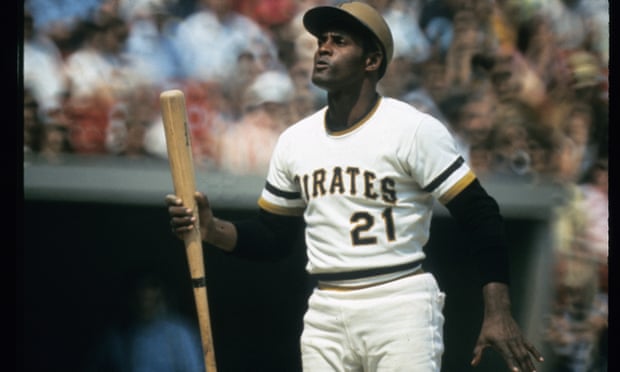 Instead, MLB teams struggling to find content for their websites, where they make big money selling fan gear and tickets, have loaded their websites with videos and images of classic baseball scenes, which the current collective bargaining agreement does not cover.

“Until a new agreement is reached, there will be limitations on the type of content we display,” wrote MLB on websites across baseball. “As a result, you will see a lot more content that focuses on the game’s rich history.”

Most gallingly, the Pittsburgh Pirates have videos of Roberto Clemente on their website right below a letter from MLB Commissioner Rob Manfried, blasting the players’ union.

However, Clemente was one of the founders of the modern players union, who was outspoken in the late 1960s on behalf of the union, as we covered in our recently published historical lookback, “How Clemente Got the Players’ Union Behind Curt Flood.”

If Clemente were alive today, I doubt that he would want the Pirates using his image to try to keep business coming in online for MLB teams while their owners try to bust their unions.

All major league players are kept under the control of one team for six years in the major leagues and seven years in the minor league system. During that time, they are unable to choose where they live and play, and their earnings are significantly decreased compared to what they would get on the free-agent market.

In an era dubbed “The Great Resignation,” baseball players also want the ability to choose where they work like many other Americans. (For more, see our recent piece “In The Era of Great Resignation, Baseball Players Just Want to Choose Where they Work”).

Donate to help us continue to cover the MLB players’ lockout.  Please, read our story on Clemente’s crucial role in founding the players’ union.

How Clemente Got the Players’ Union Behind Curt Flood

Forty-eight years ago Clemente, 38, died on New Year’s Eve while on a humanitarian and political mission to Nicaragua to ensure that post-earthquake aid wasn’t being stolen by the U.S.-backed Somoza dictatorship.

Growing up playing baseball in Pittsburgh, it was drilled into my head by Little League coaches, baseball TV announcers, and teachers that Clemente was a selfless humanitarian who gave his life at the peak of his baseball stardom to help others.

Clemente is, in many ways, the patron saint of Pittsburgh. You can see his face painted on murals and his photo in every sports bar in Pittsburgh. Decades later, his uniform is still the most common uniform seen at Pirates’ games. He is held up as a symbol of the solidarity and compassion present in a union town like Pittsburgh.

Yet, few rarely talk of Clemente’s politics, as he had hosted Martin Luther King Jr. on his farm in Puerto Rico. Even fewer talk of how Clemente’s union leadership as the National League’s top player representative changed the course of history.

On December 13, 1969, in San Juan, Puerto Rico, Curt Flood was walking into one of the most important meetings of his life: the executive committee meeting of The Major League Players Association. He was nervous as all hell about what he was about to ask his fellow players to do — back him in a controversial lawsuit.

Months earlier in October, Flood, a 7-time consecutive Gold Glove-winning center fielder, who helped lead the Cardinals to two World Series victories in the 1960s as team co-captain, was traded away after spending 11 years of his life in St. Louis. Not only was Flood being asked to move away from his family and give up his various business interests in St. Louis, but he was being asked to report to the Philadelphia Phillies, one of the most racist teams in baseball at the time.

Today, a little over fifty years later, veteran players can block trades to certain teams, but in 1969, players weren’t allowed to do so. Players were also barred from seeking free agency by the so-called “reserve clause.” Meaning, team owners could decide to send whoever.

Flood didn’t want to go to the Philadelphia Phillies, but he needed his union’s support to fight them in court. He needed to hit a home run with his union that day in San Juan, Puerto Rico.

As expertly recounted in Barry Synder’s book A Well Paid Slave, many players in the player’s union meeting that day were skeptical of Flood’s decision to sue. Two previous lawsuit attempts — 1949’s Gardella v. Chandler case and the 1953’s Toolson v. New York Yankees case — had both been lost, and lawyers predicted that Flood stood little chance of winning.

That winter, the player’s union was in the midst of tough contract bargaining with the owners and felt the case would be a distraction. Many players in the fledgling union thought that the union should instead focus on raising players’ wages and improving working conditions, not try to challenge the “reserve clause,” the Mt. Everest of baseball rules.

On the flight down to San Juan, even Flood’s teammate, the Cardinals’ own union player representative shortstop Dal Maxvill, told Flood that he shouldn’t go forward with pitching the player’s union on backing the lawsuit.

“Why are you doing this to yourself,” Maxvill told Flood on the flight. “Do you know that you are going to be out there like Lone Ranger?”

The following day, when Flood met with the Player’s union, Flood told them he was going to sue Major League Baseball for infringing on his rights as a worker to be employed by whom he pleased with or without their help.

Many of the players in the room were skeptical. Tom Haller, the All-Star catcher for the Los Angeles Dodgers and future general manager of the Chicago White Sox, asked Flood bluntly if his decision to challenge his trade to Philadelphia was based on race.

“I didn’t want it to be just a black thing,” Haller recounted in A Well Paid Slave. “I wanted it to be a baseball thing.”

There were only two other Black men in the meeting: Reggie Jackson and Roberto Clemente.

Jackson had just finished his second year in Major League Baseball, and the young phenom hadn’t endured the indignities of an 11-year veteran like Flood. Jackson began to question Flood’s decision. At one point, he even mocked Flood, a much better-paid veteran, as the only player who could afford to take on such a legal challenge.

The mood in the room seemed uncertain whether players would get behind Flood.

Then, Roberto Clemente, entering his 14th season, stood up and started to argue vehemently on behalf of Flood. Clemente had some experience organizing around racial issues in baseball. The year prior, he had led an effort to get Major League Baseball to reluctantly agree to delay the start of the season after Martin Luther King Jr. was celebrated.

Clemente recounted how the lack of free agency had forced him, as a Puerto Rican player, to play in a racist city like Pittsburgh where he faced frequent taunts from fans and journalists instead of a more welcoming environment like New York, which had a large Puerto Rican population.

According to Clemente, the imbalance and lack of free agency not only cost him the opportunity to play in a less racist environment but, according to his calculations, had cost him $300,000 over the course of his career.

Clemente repeatedly implored the players to back Flood. When he finished speaking, the barbs at Flood had stopped. As Synder recounts, “…the tone of the meeting soon shifted from whether the players would back Flood to how.”

Fifty years later, Clemente’s son, Roberto Clemente Jr., told me that his father had specifically arranged the meeting on his home turf in Puerto Rico.

“As the National League’s player representative, Dad knew how important this meeting was and he wanted to have it there in Puerto Rico,” Clemente Jr. told me last year.

Today in Pittsburgh, the entire team will wear the number “21” in an effort to get Major League Baseball to retire Clemente’s number as the first Latino superstar, much like the number “42” of Robinson was retired. There will be a ceremony on the field to honor Clemente, and the team is even offering a 2-for-$21 ticket deal to attract fans to the ceremony.

However, much like Robinson, who as a retired player testified at the Supreme Court in 1972 on behalf of Curt Flood, few would mention Clemente’s role in shaking up the labor power dynamics of the game.

For them, he is simply a saint. A saint that the ballpark organizes charity events around and whose legacy is constantly recounted on sports documentaries that re-run frequently at night on the local channels. He is the best-selling Pirates jersey of all time.

But for many of us, Clemente is so much more. Clemente was a fighter, whose politics continue to inspire us.

“Clemente really represents the values of a union town like Pittsburgh in so many ways,” says Guillermo Perez, President of the Pittsburgh Labour Council for Latin American Advancement. “And from the Latinx perspective, he set a great example by overcoming so many obstacles, and as I said, never compromising on his sense of identity as an Afro-Puerto Rican from a working class family.”

After I was fired for union organizing at POLITICO in 2015, I used to keep a copy of Bruce Markusen’s book The Team that Changed Baseball with Roberto Clemente on the cover. I used to look at the photo of Clemente and the horrific racism that he played through during his life.

When I would question if I had done the right thing in getting fired for union organizing at POLITICO, I would think of Clemente that day getting Curt Flood back and think of what Clemente was often fond of saying: “If you have a chance to accomplish something that will make things better for people coming behind you, and you don’t that, then you are wasting your time on this earth.”

May Roberto Clemente’s memory always be a blessing to folks willing to stick their necks out when it’s not popular. May we not forget his true legacy.