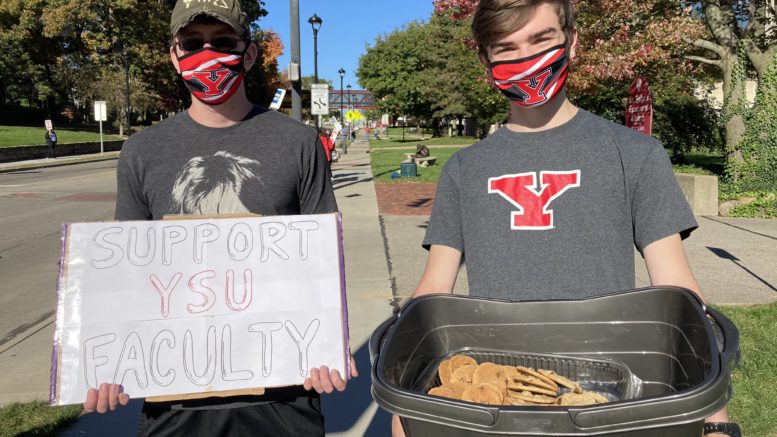 Greetings from the Burgh, where Payday is swinging back into action after honoring Indigenous Peoples’ Day.

$90 Brought in from Our Recurring Donors Today

Each month our over 530 recurring donors help us continue to grow sustainably.

Today, we brought in $90 from our recurring donors.

This month, we’re trying to bring in another 15 recurring donors by October’s end. To help us grow, please consider becoming a recurring donor today.

You can also make a one-time donation to help us make our monthly goal.

Last week, over 86% of Youngstown State’s over 300 faculty in Ohio voted to strike. Now, the strike enters its second day.

Workers are upset about a lack of job security, unsafe teaching conditions during the pandemic, and a lack of transparency from management, according to a statement put out by the union last week.

According to WKBN, both sides are reporting progress at the bargaining table on resolving the strike.

For more background on the strike, check out the union’s Twitter page, which is full of testimonials from workers.

The growing movement of faculty striking over unsafe conditions has spread to Columbus, Ohio.

This week, teachers in the suburban Columbus school district of Gahanna-Jefferson went on strike over unsafe working conditions.

While progress is being made at the bargaining table, the teachers union, the Gahanna-Jefferson Education Association (GJEA), says the district still isn’t providing firm language:

“While GJEA has proposed comprehensive contractual language, our District leadership continues to provide bullet-pointed outlines that need to be fleshed out further,” said the union in a statement put out this week. “At this point, there ARE unsigned agreements on a number of items. However, due to hours of lost time this week waiting for District proposals during mediation (including a proposal given to the Bargaining Team at 8:45 p.m Monday evening), and not yet reaching an agreement on some important elements of the contract, GJEA has made the incredibly difficult decision to be away from our students and strike.”

For more, check out WCMH in Columbus.

In Norwich, Connecticut, over 400 nurses are striking over unsafe working conditions in their hospital as COVID-19 cases continue to rise in Norwich and the nearby city of New London.

“I don’t even think ‘difficult’ defines it. It’s devastating,” Sherri Dayton, a registered nurse at Backus who is president of the Backus Federation of Nurses told the Connecticut Mirror on Monday night. “I just punched out of my last shift and it was a very busy shift. To clock out and wonder about who’s taking care of them tomorrow and how it’s going to happen – it’s driving me crazy. The stress is unbelievable.”

The nurses plan to strike for at least two days.

For more, check out the Connecticut Mirror.

The controversy of the Philadelphia Fighters union decision to endorse Trump (without a vote of its membership and disregarding the national union which endorsed Biden) has led to calls for the head of the union to resign.

The Philadelphia Inquirer has the story:

Lisa Forrest, president of Club Valiants, the fraternal organization established to ensure equality among the minority firefighters, said the next logical step was to ask for Bresnan’s resignation.

“He continues to violate the constitution and bylaws of local 22, even in his latest spin of sending out this secret mail-in ballot, which is also a violation of bylaws. All we want is for them to take the endorsement off the table. This is becoming more than it has to be,” the newly minted battalion chief said.

She said the last-minute cancellation of the October meeting was a slap in the face.

“They are pretty much saying we’re in leadership, and this is how we’re handling stuff so deal with it. They want to try to use COVID as an excuse as to why they didn’t have the meeting when just a month before, there wasn’t a problem with having an in-person meeting in September,” Forrest said.

W.E.B. Du Bois Battle with His Editor at Encyclopedia Britannica in the 1920s

Finally, Mother Jones has a long piece looking at the fights that W.E.B. Du Bois faced with white editors as a writer for the Encyclopedia Britannica in the 1920s. From Jacob Rosenberg at Mother Jones:

The affair played out over a series of letters, which have been digitized by the University of Massachusetts at Amherst. You can find them all here. They contain other echoes of our present media culture—the debate about capitalizing the “n” in “Negro”; Du Bois rallying fellow Black writers to the cause, imploring them in a letter to “stand as a unit”; Hooper reminding Du Bois that facts don’t care about his feelings; Du Bois getting stiffed on his payment. The people who are in charge today are the same sort of people who were in charge 90 years ago. They reach for the same tools to beat back any challenge to the sustaining fictions of the social order, whether they’re defending the prerogatives of the Encyclopedia Britannica in 1929 or the New York Times op-ed page in 2020.

For more, head to Mother Jones.

Alright folks, that’s all for today, keep sending tips, story ideas and links to articles along to [email protected]

And please folks, donate so we can pay the bills to keep this scrappy labor publication going.

Remember the best way to support is to sign up as a recurring donor. Thank you.