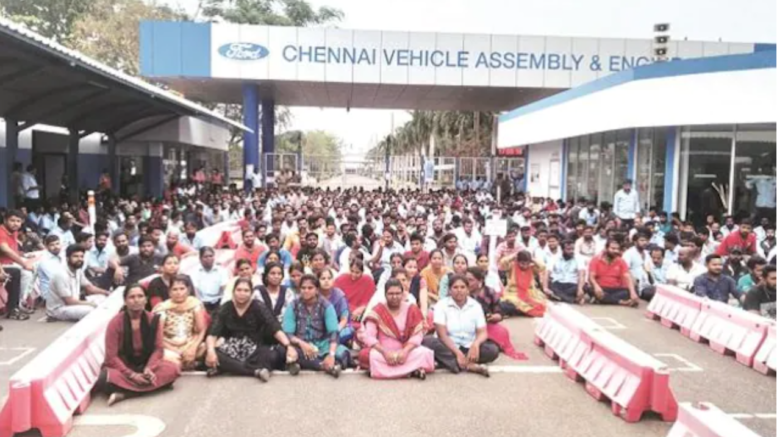 Welcome to our second international labor newsletter. We take a look at a tragedy that happened in Cambodia, U.K and Australia’s strike momentum, and how notable places in labor history may become UNESCO World Heritage Sites.

Authorities are supposed to protect civilians, but it appears this is not the case in Cambodia, where a woman claimed she miscarried after being physically assaulted by police officers during a strike.

Sok Ratana, a worker at NagaWorld Casino, had been on strike with her co-workers since December last year, demanding higher wages and the reinstatement of union leaders.

According to Radio Free Asia, authorities detained protestors who routinely gathered in front of the casino, saying they violated COVID-19 rules.

“I never thought that Cambodia has a law saying that when workers demand rights … authorities can crack down on us,” Ratana said.

NagaWorld Casino is owned by the publicly listed, Hong Kong-based NagaCorp. It is believed to have ties to family members of Cambodian Prime Minister Hun Sen.

The Economic Times reports that 2,600 workers at a Ford plant in Chennai, a city in the Tamil Nadu state in India, have gone on strike for higher wages ahead of their final day at the plant.

Production ground to a halt on May 30, with workers both occupying the Ford factory and protesting outside it. The factory is set to close at the end of June. The workers are demanding 135 days of salary for every completed year of service.

Hundreds of workers first protested after Ford announced the closure of the plant in September last year. Unlike a sister plant in the state of Gujarat, the Chennai plant will not be taken over by Indian conglomerate Tata Motors.

When the Chennai factory closes, it will affect nearly 40,000 direct and indirect jobs.

Read more at The Economic Times

The U.K.’s jolly jubilee weekend came to a screeching halt on Monday when around 4,000 workers from the Rail, Maritime and Transport (RMT) union walked out of their jobs to protest Transport for London’s plan to lay off 600 workers, about 10% to 15% of the London Underground’s staff. In all, about 100 stations were closed, according to the BBC. Monday’s walkout comes three months after Tube workers went on strike in March this year.

The workers are standing strong so far. RMT Tube workers are planning another strike later this month, on June 21. The union is hoping that this time around, 10,000 workers will walk off the job. The strike has been coordinated to run at the same time as RMT’s National Rail walkout, where about 50,000 workers will walk off their jobs on June 21, 23, and 25. That is during one of the busiest weeks for the country, where there are by-elections, sports tournaments, and music festivals.

U.K. train strikes come as workers from the country’s Crown post offices went on strike on Saturday over pay.

Meanwhile, the U.K.’s airports have been hit by long lines, delays, and flight cancellations due to staff shortages. Similar situations are playing out at other airports across Europe, where both air and ground crew are demanding better working conditions and pay, as we wrote last week. To solve the crisis, Michael O’Leary, the chief executive of budget airline Ryanair, suggested that the U.K. government deploy army officers to manage airport crowds.

Read more at the BBC

According to a Eurasianet report, about 400 mineral water factory workers in Georgia took action after they stopped getting paid. Borjomi, though a Georgian brand, is majority-owned by Russia’s Alfa Group, and has been hit by sanctions.

Georgia’s Prime Minister Irakli Garibashvili promised to take over part of Alfa Group’s shares in May, but nothing has happened since.

The workers said they have not been paid for two months, and some 50 colleagues were unfairly dismissed in May.

Some 30,000 public employees from New South Wales protested on Wednesday over a substandard wage increase.

The workers, who include park rangers and school staff, are demanding a 5.4% pay raise this year, News.co.au reported. They say that the government’s plan to increase pay by only 3% — 0.5% more than the annual wage increase cap — is inadequate considering Australia’s current 5.1% inflation rate.

The New South Wales government also plans to give $3,000 cash to healthcare workers. A union leader called it a ploy to curry favor with the public. “It’s an absolute insult to them and to so many other frontline workers that did the heavy lifting during the pandemic,” said Public Service Association general secretary Stewart Little.

The Workers Museum in Denmark, housed in a 150-year-old building that remembers the country’s labor movement, is planning to nominate historical assembly halls across the world to become UNESCO World Heritage Sites.

“We emphasise the values of dignity of workers, emancipation, equal rights, access to democratisation and solidarity in our statement of outstanding universal value,” Marie Brøndgaard, a curator at the museum, told Equal Times.