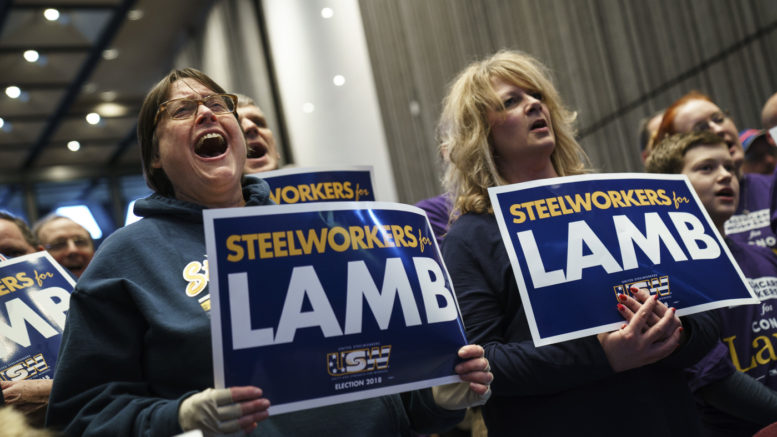 PITTSBURGH, PA. – “Stand UP!”  Steelworker Carolyn Stokes called out to hundreds of steelworkers shouting “Fight BACK!”

Culminating with a major rally at their international headquarters, no union has committed more resources to the fight to win the PA-18 Congressional election than the Steelworkers. On Friday, they gathered to motivate their base for one last wintry weekend of door knocking. A win in this struggle coming on the heels of the teachers’ and public employees’ victory in nearby West Virginia would send a message that labor movement remains powerful throughout the Rust Belt and Appalachia.

“1 in 5 voters will be from a union household,” said Carolyn Stokes. “This is our chance, y’all, this is our chance to elect a representative who will fight for workers’ issues.”

With over 18,000 members in the 18th Congressional District, the Steelworkers are among the labor unions leading the way in the fight to take back PA-18. Unions in the district are doing individualized robocalls voiced by their union leaders as well as specialized member-to-member outreach to the 80,000-plus union members in the district.

Rich Trumka started his career as a union organizer in the district and has personally made several trips to Western Pennsylvania to campaign on behalf of Conor Lamb.

In the closing days of the campaign, Steelworkers and others are finding a new sense of enthusiasm for activism among their membership following the success of the West Virginia teachers’ strike. Now union leaders on the other side of the border will get to see if they can send a message to Trump about the continued resonance of union values in the Rust Belt.

Much of Lamb’s district hugs the West Virginia border and shares a common media market in Pittsburgh. Local TV news affiliates watched in PA-18 covered the strike closely and many people had relatives and friends on the other side of the border engaged in the inspiring statewide strike.

Pennsylvania AFL-CIO Secretary-Treasurer Frank Snyder said the union has noticed momentum from the striking teachers’ victory carrying over into PA-18.

“I think people are motivated in a way that they haven’t been before,” said Snyder.

The strike was particularly inspiring to women, who comprised 80% of the workforce in West Virginia.

“It’s definitely had an effect. My friends at work are more focused on union than they ever had been,” said Casey Konopiso, an SEIU member at Allegheny General Hospital.

Leaders also says that they are witnessing a big shift in the way their retirees are responding.

Steelworkers Organization for Active Retirees (SOAR) said it has dozens of retirees — some in their 80s and even a few in their 90s — doing direct outreach to retirees in the district.

Polling shows that senior citizens are breaking for Lamb in the closing days. The Lamb campaign has focused its efforts on reaching out to the union retirees in the district.

As the PA-18 election comes to a conclusion, former prosecutor Lamb will soon be making closing arguments. On Sunday, hundreds of coal miners and teachers’ union activists from West Virginia plan to cross the border around Waynesburg, PA to hold a rally in support of union rights.

One issue that will be highlighted is Rick Saccone’s refusal to support the Miner Pension Protection Act, which would bail out pension funds that were falling as a result of bankruptcies in the coal industry.

With nearly 20,000 mine retirees in PA-18, the Lamb campaign is running neck-and-neck in the coal counties of Greene and Washington. Protecting the retirements of these workers is an issue that is near and dear to the hearts of voters there.

“It’s pushing some of them into early graves because that worry and that stress on them is just too much…something they should have never gone through or had to deal with in their lifetimes,” said Kremer. “They worked hard and they expect what they earned to be given back to them and it’s not there.”

Kremer thinks that many of his fellow coal miners will vote against Saccone because they are concerned about how Saccone would vote on mine retirement issues.

“Trump is trying to take advantage of coal miners. He is trying to get them on his side by making them a false promise and people are starting to wake up to that,” said Kremer.

Donate so Payday Can Continue to Cover the #PA18 Election.