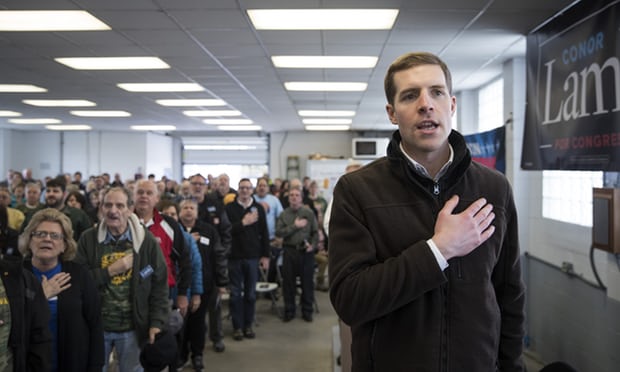 In the closing days of the #PA18 Special Election, Payday Senior Labor Reporter Mike Elk filed a dispatch from Waynesburg, PA for the Guardian looking at the misgivings of many in the labor movement, who are backing Conor Lamb:

“You elect this man to Congress and you won’t have to lobby him for one minute. He’s for your union, he’s for your pension, and he’s for your health care,” Roberts told the crowd to loud applause.

In spite of that applause, union veterans in attendance said that while they may be excited about defeating Rick Saccone, they aren’t naive, either.

In the back of the room wearing a United Mine Workers sweater and carrying a large American flag retired coal miner Dave Thearle said that he will vote for Lamb and encourage his friends to do so, but as with any politician, he remains cautious.

“I think you gotta be cautious with all politicians, you know,” said Thearle. “I’m 66 years old, I’ve seen ones get in, they promise you something – then they get in and do something else so we’ll what happens. I just hope he follows through on the things he talks about.”

Be the first to comment on "Despite Having Mixed Feelings, Labor Turns Out the Vote for Lamb"