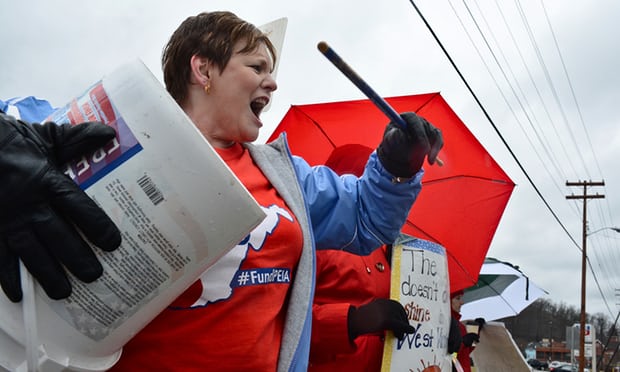 Payday Senior Labor Reporter Mike Elk traveled to Wheeling, West Virginia, where he filed a dispatch for the Guardian:

Despite the state enacting anti-union “right-to-work” legislation in 2016, support for the teachers among the public remains strong in the once union stronghold of West Virginia.

On the picket line outside of Bridge Street Elementary, cars drove by honking and yelling in support of the striking teachers.

“Out of the last three hours, we have only gotten one middle finger,” said Bridge Street Elementary teacher Lindsay Armmirante. “The rest has been all honks, thumbs up, fist bumps, smiles, it’s actually been a lot of fun”

Horns blared as Sub Express shop owner Perry Wade stopped his car to get out and thank the teachers. “It’s not much, but it’s more than they are giving you in Charleston,” joked Wade as he hands them cards for free six-inch subs.

To read the full story go to the Guardian.