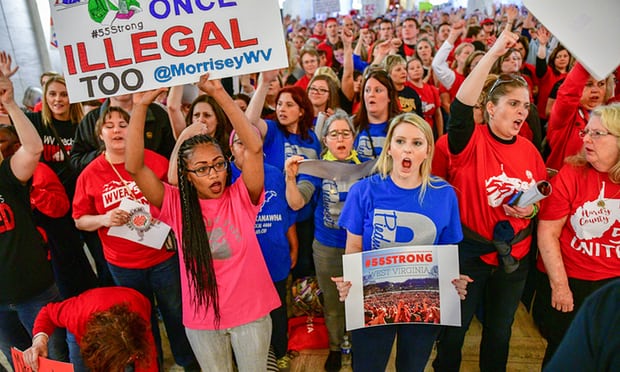 (West Virginia teachers hold a rally in Charleston last month. Strike leaders from Oklahoma, Arizona and Kentucky have been in contact with their West Virginia peers to learn lessons. Photograph: Tyler Evert/AP)

From the Woody Guthrie Center in Tulsa, Payday Senior Labor Reporter Mike Elk filed a dispatch for the Guardian:

On Easter Sunday in Tulsa, Oklahoma, those not found in the church could be found touring the Woody Guthrie center downtown. Easter weekend is a time for families and this weekend Oklahoma’s have one thing on their mind: on Monday, teachers in over 100 school districts in Oklahoma are poised to go on strike demanding higher pay.

America is poised to see a wildcat strike wave not seen since the days of the Great Depression when the Oklahoma native Woody Guthrie toured the country, writing songs like This Land is Your Land and Union Maid, inspired by the role of women in a 1940 Oklahoma oil workers’ strike.

Guthrie’s message was not lost on the people touring his museum on Sunday.

“I think today we forget where we come from and I think probably take too much for granted,” said Howard Bowling as he toured the Guthrie Center in downtown, Tusla with his wife and adult children. “ I don’t think people realize the sacrifices that were made.”