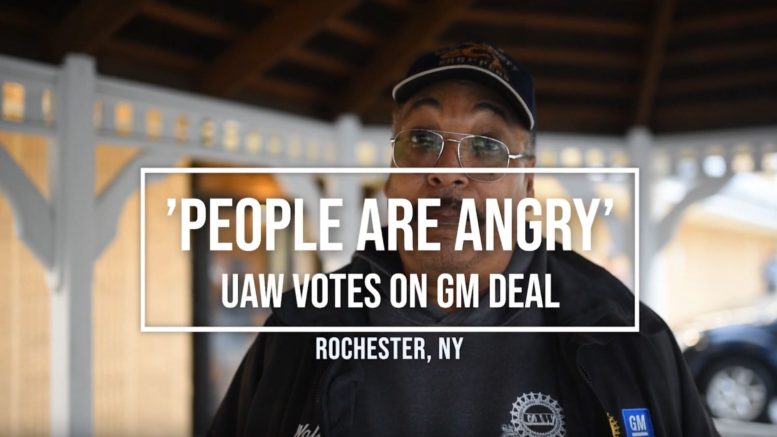 Driving up to the the Diplomat House, a Rochester meeting venue I could already feel uneasiness. Several UAW members stood, smoking cigarettes, grumbling about the deal. It was 9am a full hour before the presentation of the GM/UAW deal would start but they were already there and they weren’t happy about it.

A dozen or so had gotten together and made t-shirts that proclaimed their displeasure with the proposal – many had already read about it either in the press or on their union’s social media pages. The t-shirts read “I walked the line for 30 days an[d] all I got was this t-shirt” and had a large UAW with a line through it on the back.

I'm back in Rochester covering the vote on the #UAWStrike deal and based on the tshirts alone, it's not going to pass here. Here for @PaydayReport and @MikeElk pic.twitter.com/ngxWc5rSIH

While press wasn’t allowed inside the meeting, UAW members talked to PaydayReport on and off camera to describe the scene. There wasn’t any chair-throwing but there were quite a few emotional moments. One woman told members that she lost her home during the strike, unable to make rent and still was unhappy with the deal. Another yelled “Fuck this, let’s vote now.” Chris, a UAW member who has worked at the plant for over 6 years and is near retirement shared the displeasure.

Tom Hauck, a maintenance electrician, was unhappy as well – he explained that due to the specifics of the deal the future of the GM plant in Rochester was very questionable. He laid the blame squarely on the shoulders of General Motors saying they were “selling out America.”

UAW Local 1097 President Dan Maloney, who made it clear he was not personally voting for the deal gave Payday a rundown of what was happening inside, sharing the general feelings of everyone else I talked to that this deal did not give a good future for the plant or for Rochester.

Talking to dozen or so UAW members outside of the hall as they cooled down from the intense meeting that was happening inside – many actually and metaphorically smoking. Not a one said publically they were voting for the deal. Obviously that could be as they didn’t want to express that opinion in front of their colleagues but no one seemed happy that this was the product that over 30 days striking in the cold and the rain produced.

We won’t know what the national vote totals are for several days but the ones coming out Rochester and other parts plants like Parma were a clear NO.

Videos from the Picket Line – 31 Days in

Back in Rochester – More Videos from the Picket Line

After 7-Year Struggle, Memphis Workers Win Federal Ruling But Will It Help?

Be the first to comment on "WATCH: Rochester UAW Members Unhappy with GM Deal"