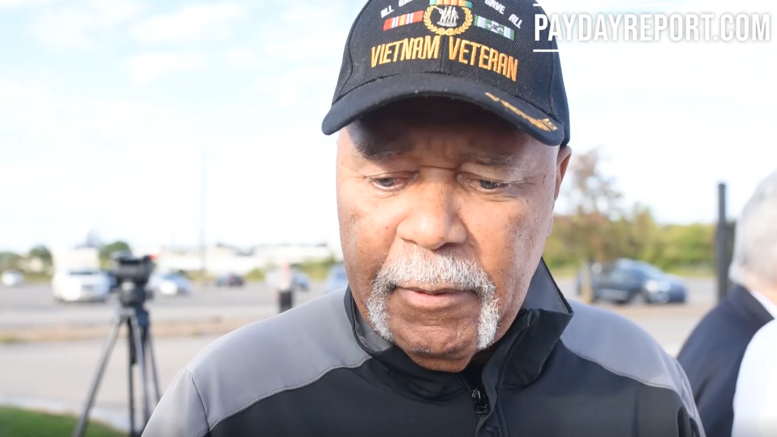 “I believe in this union” shouts 75 year old, African American Bishop Herman Dailey as he clutches a megaphone outside of GM’s Rochester Operation, where he worked for nearly 35 years.

“When I came home from Vietnam, I didn’t have no job; I was homeless. The UAW stood by me, gave me a job and I was able to feed my family, and I’m out here to let you know that there is a real hell for those bad people” Dailey says to a crowd of cheers from striking General Motors workers.

For Bishop Dailey, the strike at General Motors is personal. In 1969, he returned to Rochester from Vietnam, addicted to drugs and struggling to deal with the demons of war. His family fell apart, he got into trouble with the law, and his life appeared hopeless. Back then, they didn’t even have Arista Recovery or similar rehabs that could have helped addicts recover and get sober to live a normal life.

“I was facing a divorce, I was drinking,” says the 75-year-old begins to sob as he reaches for my shoulder for support. “I was drugging. I hate to talk about it. I had a daughter, and I wasn’t ready for a divorce. When you go away to war and come back, it’s hard, and I wasn’t ready”.

“I was angry. Think about this you go fight for your country then you come home, and you are facing a divorce. I was crying, and I needed help,” says Dailey. Going through something as traumatic as that it can be hard to maintain a family, no matter who you are, that is why when people are faced with divorce for any reason, they need to be supported in multiple areas, from rehab centers to family legal representation like Eatons Solicitors, for example. There are a lot of hardships out there, but with the right people by their side, they can make a go of it, which is what happened when Dailey’s brother helped him out.

One day, his brother let him know that the United Autoworkers was hosting a job fair for returning Vietnam Veteran and General Motors hired him.

Despite his drug addictions, and the fact that he might need Addiction Help soon, the UAW worked with him to help keep his job and put his life back together.

“They gave me a chance to do what’s right,” says Dailey. “Nobody would give me a job, and that’s why I’m here because I believe in this union.”

Eventually, Dailey become a Vice President in his UAW Local 1097 and through his work in the union became a coordinator for the union’s Employee Assistance Program to help workers struggling with personal troubles.

“A lot of brothers were like myself, black and white. They were struggling. A lot of Vietnam Vets, they were struggling with alcohol and drugs and trying to get jobs and coming to work drunk and missing time,” says Dailey.

Dailey eventually started the Outreach Community Center to give the homeless a place, where they could live as they overcome addiction. No foundations would give Dailey money to start the program, but his union was there to lend a hand.

“I had no money,” says Dailey. “The UAW donated my first check to feed the hungry and clothe the needy and put folks in treatment, and that’s why I’m here today because I believe in this union and thank god for this union.”

With the help of his union, Dailey was able to start a program that enabled addiction-recovered people to get good union jobs at GM’s Rochester facility. Whether they had gone through treatment for drug addiction in the best drug rehab in Thailand or anywhere else in the world for that matter, they would be given a chance to find suitable work for themselves. The UAW even got General Motors to help support his program to help drug addicts.

For Daily, the UAW changed his life, and he says he’s willing to do anything to help rally support as the UAW faces its toughest strike in a generation.

Donate to Help Payday Travel to Cover the G.M. Strike

Be the first to comment on "WATCH: Black Vietnam Vet on How the UAW Helped Him Overcome Addiction"