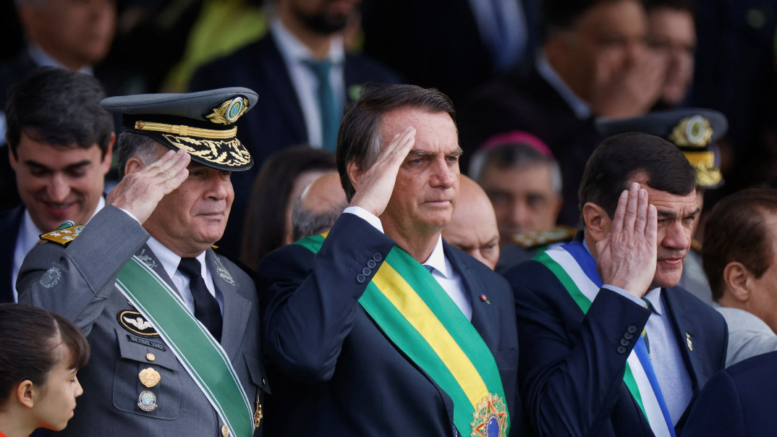 WASHINGTON, D.C. – “I don’t see any way that Lula cannot win the election in the second round — unless they kill him,” says James Green, President of the Washington Brazil Office, an NGO that advocates for measures to protect Brazilian democracy.

With Lula up by double digits over fascist Brazilian President Jair Bolsonaro, most observers predict Lula will win the election against Bolsonaro in Brasil on Sunday, October 2. Recent surveys also show Lula polling in the high 40s, which may be a sign he could pull off a victory in the election’s first round.

Bolsonaro, though, has made violent threats in the past if he is defeated, in addition to spreading conspiracy theories about the integrity of Brasil’s elections in attempts to delegitimize any unfavorable results.

“I have three alternatives for my future: being arrested, killed, or victory,” Bolsonaro, a former pro-dictatorship Army captain, told a group of evangelicals leaders last year. “And I tell those scumbags, I will never go to jail.”

Unlike when Brasil was living under a military dictatorship from 1964 to 1985, Green sees the current U.S. government being on the side of democracy as Brazil now faces another potential coup threat from Bolsonaros supporters. Green has spent more than four decades working on Brazilian-American solidarity issues beginning in the 1970s when he worked with the underground Brazilian left to help topple the military dictatorship.

“A lot of leftists in Brazil don’t trust Biden,” says Green. “But I tried to explain to them that the Democratic Party has been traumatized by Trumpism and by what happened throughout the four years, but also, January 6th was just really so shocking. And they don’t want to support anyone who is close to Trump in that way.”

Green says that in his conversation with military experts, it’s become clear that Biden’s support for fair elections in Brasil has had an effect.

“Biden’s statements have been very careful and very precise, and very unified, it’s been very, on target to send a message, and that message has gotten through to the armed forces,” says Green. “Therefore, the likelihood of a real coup is not there at this point.”

However, Green warns of the threat of a violent uprising by Bolsonaro supporters, similar to when Trump supporters violently attempted to take over the U.S. Capitol on January 6th.

While Green says it’s unlikely that Bolsonaro can pull off a coup, he does see the threat of violence to challenge the election as very real. Already, there have been several high-profile killings of Lula supporters by Bolsonaro supporters throughout Brasil.

Bolsonaro and his advisers have also closely studied why Trump’s attempt to provoke a January 6th insurrection failed and have communicated closely with Trump aides. Earlier this month, Trump endorsed Bolsonaro and several of his key advisors, including Steve Bannon, who have been advising Bolsonaro. His son Eduardo Bolsonaro, a Brazilian congressman, traveled to the U.S. last year to meet with Trump.

Throughout his presidency, Bolsonaro has encouraged his supporters to arm themselves and prepare for the possibility of defending their political rule. More than 2,000 Bolsonaro fan clubs have started gun clubs that many on the left say closely mirror paramilitary groups.

However, few places face a greater threat of paramilitary violence than Rio de Janeiro, which is Bolsonaro’s hometown and where he was elected to Congress for nearly 30 years and remains very popular.

Green fears that the militia, particularly in Rio, will take a page from the Trump supporters’ playbook and attempt to provoke violence in the wake of a loss by Bolsonaro. In the late 1990s, former policemen formed paramilitary “militias” in Rio de Janeiro, claiming that they were using the militias to drive drug traffickers out of the favelas in Rio. (However, the militias often engaged in the same type of drug dealing and violence as the drug gangs they replaced.)

“I think the militias are strong and real,” says Green. “There’s no question about that. There’s ongoing political violence, and it’s coming from Bolsonaro supporters, and they’re extremely aggressive, and they’re killing people.”

Many Bolsonaro supporters have been closely studying the January 6th insurrection. At the same time, several Brazilian Supreme Court Justices have denounced Bolsonaro’s attempt to delegitimize the election’s integrity, making it highly likely there will be prosecutions for any attempted insurrection in Brasil similar to what happened in the U.S.

With the threat of violence on the table, Green believes it’s more important than ever that Americans watch the election closely. So far, Green has been disappointed by the media’s lack of attention in the U.S. to the situation in the second largest democracy in the Western Hampshire.

“Americans need to pay attention to this, because Bolsonaro represents the same threat to democracy that exists in the United States and it is part of a global trend of countries such as Italy, Hungary, Poland, Russia,” says Green. “It really is a global battle now we’re fighting between democratic regimes and authoritarian regimes.”

Donate to Help us Cover the Election in Brasil