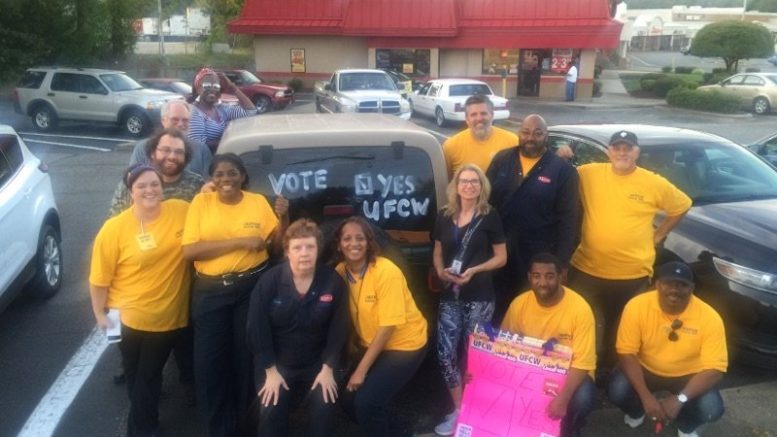 It’s Payday, folks! Greetings from Chattanooga, Tennessee: the Pittsburgh of the South, where Payday is having a co-op retreat this weekend.

This week’s Lunch Pail goes out to the 200 Lipton Tea Workers in Suffolk, Virginia who voted to join United Food and Commercial Workers by a vote of 108 to 79 and the 101 Sysco FreshPoint drivers based in Pompano Beach, Florida who voted to unionize 60 to 35.

This week, Payday began to conduct a survey to help us provide better coverage of the Southern labor movement. If you live in the South (as broadly defined by the U.S. Census) and are involved in the labor movement, please go here to take this brief survey on your relationship with the media as well as issues that organized labor is currently facing. It should only take about five minutes to complete and we’d greatly appreciate it.

The Bureau of Labor Statistics released its latest numbers on the state of employment, and as Dean Baker of the Center for Economic and Policy Research notes, growth in employment was slightly less than expected and also a decrease from the gains in July. Baker continues:

On the whole the August report suggests a moderately healthy labor market, but one that is not reaching any constraints. With the [employment to population ratio] still well below pre-recession levels, there are still many potential workers who would like jobs. Similarly, the recent drop in hours suggests that firms are not straining to find workers as does the data showing wage growth is maintaining a moderate pace.

A similar Gallup poll, this one asking whether people approve or disapprove of unions, was conducted earlier this month. In that poll, 56% said they approved compared to 36% who didn’t. Unlike the poll on unions and the economy, the positive view on unions has nearly always been in the strong majority. Only in 2009 did it dip below 50%, and it still held the plurality, with 48% approving and 45% disapproving.

This week, the NLRB found that the company’s action (or lack thereof) “constitutes an unlawful failure and refusal to recognize and bargain.”  The NLRB then ordered Volkswagen to bargain with the UAW.

On Thursday, Volkswagen once again refused and appealed the NLRB’s decision in federal court, saying that it disagreed with separating the maintenance workers from production workers.

UAW Secretary-Treasurer Gary Casteel, a Tennessee native himself, was quick to blast the decision:

The federal courts have consistently upheld the NLRB labor standard that enabled the skilled trades vote in Chattanooga. Volkswagen’s refusal to comply with the law is especially troubling when IG Metall President Jorg Hofmann and other top German labor leaders have said it is not acceptable for the company to abide by the law at home but disregard it elsewhere in the world.

Dominion Power Prepping to Lock Out 1,000 Workers in West Virginia & the South

Dominion Power is one of the largest power providers in the South and despite being profitable, it is now threatening to lock out more than 1,000 workers across the South. In April, United Gas Workers Local 69 members, a division of Utility Workers Union of America, rejected the contract by a vote of 766 to 55.

Now, United Gas Workers say that they are preparing for a lockout. Payday will continue to follow this story.

Nearly eighty years ago the U.S. passed the Fair Labor Standards Act, which gave most private-sector hourly employees the right to overtime pay, amongst other provisions. It was later amended to expand coverage to additional private sector workers as well as those in the public sector. However, to this day the law exempts farmworkers (and others) from all federal wage and hour protections.

This week, California’s state legislature could become the first to grant farmworkers the right to overtime pay after 8 hours a day or 40 hours a week. After intense lobbying for the bill by top Democrats, including U.S. Secretary of Agriculture Tom Vilsack and California Lieutenant Governor Gavin Newsom, the measure passed by a vote of 44 to 32.

Governor Jerry Brown, who signed a law in 1976 that required employers to pay California farmworkers overtime after 60 hours of work, has yet to say whether or not he will sign this one.

In 2010, foundry worker Gregory Bell stepped into an unguarded opening and onto molten iron, resulting in the loss of part of his foot. Last week, a jury awarded Bell and his wife $500K. Kendall Dunson, their lawyer, told al.com:

Employees have a reasonable expectation that when they go to work, they will be able to do their jobs safely. It is our hope that this verdict will lead to safety changes that will prevent any other workers from having to suffer a similar injury.

Meanwhile, just north in Tennessee, that state’s Department of Labor and Workplace Development reported that 22 Tennessee workers suffered fatal job-related injuries since January, with 10 of them occurring in July alone. Steve Hawkins, administrator of the Tennessee Occupational Safety and Health Administration, said “Most all of these could have been prevented.”

It really is significant because in all of last year we had just under 40 fatalities in the state of Tennessee. So if we were to keep up that rate of 10 fatalities in July, that would be an average of 120 for the entire year.

In last week’s Lunch Pail, we reported on an even more disturbing situation in Virginia: workplace deaths there had already surpassed last year’s total.

Payday reader Chris Culig, a Pittsburgh native, reminded us of a source of pride for all Pittsburghers. This week marks the 45th anniversary of the Pittsburgh Pirates setting a landmark in civil rights.

The 1970s Pirates team, headed by ace pitcher Dock Ellis, a Black Panther, was known as being a leader for breaking racial quotas and allowing black ballplayers to play positions like pitcher and catcher, which were normally reserved for white players only. As a result of the racially progressive atmosphere, the Pittsburgh Pirates were the first team to field an all black and Latino team on September 1, 1971.

“It really wasn’t a major thing, until around the third or fourth inning, and Dave Cash was sitting next to me, and one of us said: ‘You know, we got all brothers out there, man,’ and we kind of chuckled because it was no big deal to us,’” Pittsburgh Pirates centerfielder Al Oliver told MLB.com in 2011. “We really had no idea that history was being made.”

For most of the 1970s, the Pittsburgh Pirates were leaders in race relations, in part from the leadership that Roberto Clemente had provided until his death in 1972. In that year, he died in a plane crash on his way to deliver relief supplies to Nicaragua and to criticize the country’s anti-communist dictatorship.

Columbia, along with Harvard, Princeton and Yale Universities and the University of Chicago, have posted information online about the possible effects of unionization. Most point out that all union members must pay dues and are expected to participate in strikes, should they occur, and that unionization won’t necessarily improve their working conditions. Some contain concerns previously voiced to, and largely rejected by the NLRB — namely that unionization compromises the student experience in a number of ways.

“While reasonable people can come to different conclusions on this point, it is vital that we maintain the special and individual nature of students’ educational experiences and opportunities for intellectual and professional growth,” reads a letter from on the Chicago website from President Robert J. Zimmer and Provost Daniel Diermeier. “A graduate student labor union could impede such opportunities and, as a result, be detrimental to students’ education and preparation for future careers. It could also compromise the ability of faculty to mentor and support students on an individualized basis.”

A Yale news story quotes President Peter Salovey as promising a free and open debate on the union issue. But, he says, “The mentorship and training that Yale professors provide to graduate students is essential to educating the next generation of leading scholars. I have long been concerned that this relationship would become less productive and rewarding under a formal collective bargaining regime, in which professors would be ‘supervisors’ of their graduate student ‘employees.’”

Hamby spent over a year traveling the world to report on how secret trade courts were negatively impacting the efforts of countries to implement their own labor and environmental laws.

Take some time this weekend and read Hamby’s four-part series looking at secretive trade courts. Also, write to Payday at [email protected] about what you think the story of each week should be.

Here in the Mississippi Delta, one of the poorest regions in the United States, buying a home is often out of reach. And lenders have a history of unfairness to African Americans. As a result, it’s been difficult for Delta residents to build any assets. But stories like Alexander’s are standing that history on its head. In a region where foundations are scarce and nonprofits lack resources, local banks and credit unions are increasingly helping poor residents escape poverty by providing credit, teaching the dangers of payday lending, and encouraging the development of worker-owned cooperatives.

Via LaborOnline, the blog of the Labor and Working-Class History Association, we learned about historian William Jones’s Portside interview of southern labor historian Mike Honey about his film Love and Solidarity. As Honey explains:

Love and Solidarity takes you through [James] Lawson’s early life and into the civil rights movement in the 1950s and 60s and then into the economic justice, immigrant rights and Dreamers student movements in Los Angeles – in all of which Jim Lawson participated.  Rather than a biography of Lawson we wanted to try to capture how the ideas and practices that he’s been teaching and doing as an organizer through the years remain powerfully relevant today.  The idea for the film started with Kent Wong at UCLA Labor Center.  Unions are being crushed and destroyed in most places in the USA, but in Los Angeles the labor movement has grown in strength.  This was partly through transformational leadership from organizers inspired by Lawson.  In 1980-90s one of the first Latina union leader in Los Angeles was elected, Maria Elena Durazo (HERE Local 11).  She and Wong both relate in the film how they both learned from Lawson the theory and practice of non-violent action applied to labor movement.

Finally, Smithsonian Magazine has a fascinating read this week on how archaeologists are unraveling vital clues about how African Americans hid in swamps throughout the South to escape from slavery.

Find a Labor Day Event Near You this Weekend

Happy Labor Day weekend! If you are looking for something to do, the AFL-CIO has a tool that will find the closest events in your area.

Thanks for reading this week’s Lunch Pail. Please consider becoming a dues-paying reader to show your support for our work.

Correction: an earlier version stated that United Gas Workers Local 69 was SEIU-affiliated. It is instead a local of the Utility Workers Union of America.