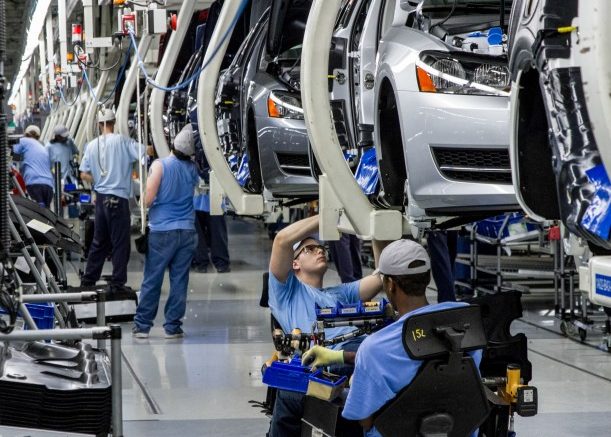 (This article originally appeared at the American Prospect)

CHATTANOOGA, TENN. – Outside of Volkswagen’s 3,000-worker auto plant in Chattanooga, where they make the Passat and the Atlas, hundreds of union members from all over the South gather to wave large blue circles with the United Auto Workers symbol, as workers drive off from the afternoon shift.

Workers from across the South—construction workers from Nashville, Ford workers from Atlanta, and coal miners from Northern Alabama—have come to Chattanooga to cheer on workers in the closing days of the UAW’s nearly decade-long campaign to unionize Volkswagen. Voting in the election begins on Friday.

A union has never won an election at a foreign-owned auto plant in the South in over three decades of trying. Many Southern workers are praying that Chattanooga will finally break the dam of anti-union opposition, opening the floodgates for organizing across the South.

“It would really open the door for us to finally unionize the Mercedes plant in Tuscaloosa,” says United Mine Workers Local 2397 Vice President Larry Spencer as he waves at a pro-union worker honking his horn in support of the union.

Five years ago, the UAW lost a union election here in Chattanooga by a margin of only 86 voters. However, nearly a half-decade later, many workers say they are beginning to see through the broken promises of Volkswagen and many are optimistic that a win at the plant may be possible.

A win at Volkswagen in Chattanooga would greatly encourage fiscally conservative union leaders to invest significant resources in organizing the anti-union South, finally. Therefore, anti-union forces are going all out to vilify the United Auto Workers.

“As UAW plants close across the country, they are desperate for new members. Now they are coming to Chattanooga to take money out of your paycheck,” warns a TV ad put out by the anti-union group Southern Momentum.

The UAW has responded with TV ads of their own, featuring a montage of workers describing how forced overtime and arbitrary changes in shift schedules have hurt their family lives.

In the closing days of the campaign, instead of focusing on wage and benefit issues, union workers in the heart of the Deep South are arguing that they need a union to win respect on the job.

“They will yell, they will curse you out,” says Vicki Holloway, an autoworker at the plant. “If they don’t like you, if you don’t talk the way they wanna hear, if you don’t laugh at their jokes, and if you are not one of the good old boys, you don’t have a chance.”

In an auto assembly line, workers are forced to continually move in conjunction with other workers, so the line doesn’t slow down. The speed of the line creates a culture of strictly enforced discipline, where workers who can’t keep up are quickly weeded out.

“It’s like a marathon when you first start, you are going to be running because you are not used to the line speed,” says Robert Chortkoff. “It tests you.”

Seven years ago, Chortkoff graduated from a trainee class of 40 workers. Today, he says that only two other workers from that 40-person class are still working at Volkswagen.

“The turnover is extremely high. It’s like a revolving door,” says Chortkoff. “I see them come and go all the time. Some people last a few days, and you never see them again. Other people will be there for a short period of time before they’re outta here.”

“In the past, some of the workers would go to HR with complaints and it may be about a supervisor that was harassing you. They would tell us that we would look into it, we will do research,” says Holloway, who says she was faced with racist taunts and discrimination as a middle-aged African American woman working at the plant.

However, Holloway says that all too often, filing a complaint with HR is simply inviting retaliation from the company.

“By the time we come back downstairs to our jobs, the supervisors know what’s going on, they tell our team leader, the team leader tells the other employees and everyone knows your business,” says Holloway. “We never hear back from HR and that supervisor from there on seems to write you up for some sort of minor charges, things like job performance, anything just to put paperwork on you just because you’ve gone to HR against them.”

To defeat the union drive, management is promising workers to give them another chance to change their behavior.

Volkswagen’s Chattanooga plant ditched their previous CEO, Antonio Pinto, and brought back popular former plant CEO Frank Fischer. Volkswagen has also promised to improve working conditions and even lowered the air-conditioning in the plant all the way down to 72 degrees as a token of their commitment to change.

However, at the same time, Volkswagen is threatening that if workers vote for the union, it may close the plant.

The company even brought in Tennessee Governor Bill Lee to warn workers that bringing a union into the plant could dissuade businesses from coming to Tennessee.

However, workers who voted against the union the last time in 2014 aren’t all drinking the union busters’ Kool-Aid this time around. Many older workers are also educating younger, less union-friendly workers on the company’s previous failed promises.

“Those workers are showing incredible leadership, and it helps a ton,” says Matt Sexton, a plant employee.

Workers also have a new sense of confidence in the ability of the union to take on management and win changes.

In January, when management decided to cut 60 hours of paid time off per year, 40 workers from the door assembly line went on a wildcat strike, shutting down production for more than two hours until management agreed to reinstate the paid time off.

Community support is also on the side of the UAW. Since the first failed election, unions and other groups have invested in hiring community organizers to mobilize on behalf of workers. The pro-UAW TV ads have also mobilized support behind the workers.

In the closing days of the campaign, workers at the plant are feeling confident and upbeat that they can win. Win or lose today, Volkswagen workers in Chattanooga say they feel emboldened.

“We are pushing on, we have come a long way, and there is no way we are turning back now,” says Vicki Holloway.