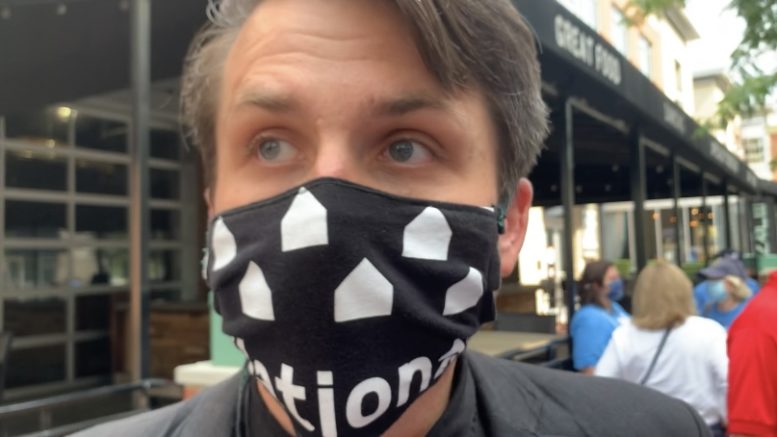 PITTSBURGH, PA. – Payday Report has confirmed through a trace of IP addresses that Pittsburgh NewsGuild Unit Delegate Zack Tanner is responsible for the violent threatening emails sent to me, Payday founder, Mike Elk.

Fuoco had been a mentor to Tanner within the union, however, Fuoco recently resigned in September after Payday Report revealed numerous sexual misconduct allegations made against him.

Now Fuoco’s succession has set off a toxic battle for the leadership within the union and has jeopardized Tanner’s leadership role in it.

But the person who was elected to succeed Fuoco, Wimbley, declined the position last Wednesday after Fuoco’s allies accused her of trying to steal the union and threatened to raise federal labor board issues if she took office.

“To be quite honest, I feel this election was stolen from me,” Wimbley wrote in a union-wide email written last Wednesday and obtained by Payday Report.

Additional questions remain about the conduct of the troubled union, and particularly after an investigation into Fuoco ally, Tanner, has revealed his role in sending me violent, graphic emails that wished death upon me, taunted me as an autistic, and mocked our readers as primarily being “only other autistic motherfuckers.”

On Oct. 17, I received these two violent and rather threatening emails shortly after Payday Report published an exposé of Fuoco’s sexual misconduct.

A reverse IP address search performed by Payday Report revealed that the same IP address that created “[email protected]” from which these emails had been sent, also created ZackTanner.com, the personal website of NewsGuild officer Zack Tanner.

The reverse IP address has been confirmed by two internet experts.

Deeply concerned by the emails given the assault by Tanner the month earlier, I hired a private investigator to dig into who had sent the threatening email.

The investigator discovered that the email had been sent by the email address “[email protected].” Creating a separate website domain, “mikeelk.com,” and creating an email account associated with the website was a sophisticated attempt at avoiding tracing and something that a skilled web designer like Tanner would have the technical expertise to do.

Our investigation revealed that the domain was registered on July 30. The date was significant as it was less than 24 hours after I had publicly called out Tanner on Twitter and demonstrated – with screenshots – how he had lied to the press and made contradictory statements about the actions of the Michael Fuoco-led leadership of the Pittsburgh NewsGuild.

The fact that a website was created using my name to harass me on the same day that I informed Tanner I was investigating Fuoco, his NewsGuild mentor, hardly seems like a coincidence.

The website associated with “mikeelk.com,” (which merely contains a picture of a moose) was created two and a half months before I received the first email. Sent from [email protected] at 7:41 p.m. on the eve of Friday, October 16, it was titled “you little bitch ass autistic motherfucker.”

Payday first became suspicious that the threatening, violent emails were sent by Tanner, the web designer at the Pittsburgh Post-Gazette after we noticed the emails were sent from the “mikeelk.com” domain.

I reported the findings in my editorial “NewsGuild Staff Shakeup as Questions Linger about Violent Intimidation, Racism & Sexual Misconduct” where I revealed that the “mikeelk.com” domain was registered 24 hours after I had called Tanner out publicly on Twitter for his contradictory statements about Fuoco’s actions.

Earlier in September, Tanner was also caught on tape repeatedly hitting, elbowing, and punching me in the ribs while I attempted to ask national NewsGuild President Jon Schleuss about the cover-up of Fuoco’s sexual misconduct in our union.

The emails were an extremely disturbing series of violent death wishes and ableist taunts which made me feel threatened especially when we discovered that Tanner, who I regularly see out at bars in Pittsburgh, had previously pled guilty to criminal charges stemming from a drunken fight with a taxi driver outside of a bar here in Pittsburgh in 2015.

Tanner went to great lengths to disparage my autism and struggle with PTSD as a war reporter who had covered the drug war in Brasil (which I have written about extensively), writing that I had “pretend PTSD.”

In an unsettling reference to my father the United Electrical Workers elected Director of Organization, Gene Elk, he wrote: “You’re a fucking bitch piece of shit who is just coasting on his dad’s legacy as a labor leader.”

“You should be committed to a home that shocks electricity through your asshole head until you die,” wrote Tanner. “The world would be a better place without your fucking bitch ass in it.”

When confronted in person at a union rally, Tanner ran from Payday Report and denied sending them.

“Nobody sent you any emails,” a defiant Tanner said, smirking at me. “None of that happened.”

Tanner also denied punching, hitting, and elbowing me, which was corroborated by videotape. He also denied being contacted by the Committee to Protect Journalists’ U.S. Press Freedom Tracker regarding the incidents.

However, in an email to Payday Report, Stephanie Sugars of the U.S. Press Freedom Tracker confirmed that she did indeed contact Tanner on multiple occasions, but he has yet to reply.

Both the national NewsGuild and its Pittsburgh affiliate have refused multiple requests for comment.

I’ve filed criminal charges against Tanner for assault and harassment and the Allegheny County District Attorney’s Office is currently investigating the charges. Because of his previous history, he may need the legal assistance of professionals similar to a Minnesota Criminal Defense Attorney if he thinks he can fight against it. However, I am definitely going to be fighting this myself.

Additionally, if action is not taken by the NewsGuild, I will file federal labor board charges against my own union, the NewsGuild.

Violent attacks by union officers against members of the union is a violation of my federal union rights under Section 8(b)(1)(A) of the National Labor Relations Act as union members have a right to engage in debates within their unions without fear of violent intimidation.

Violent attacks and threatening emails for merely uncovering sexual misconduct in the rank of the leadership of the largest journalist union in the U.S. should not be tolerated.

Since I was first attacked by Tanner on Sept. 25, I have repeatedly asked, in emails, that the NewsGuild open an investigation into Tanner as he is a unit delegate to my international union, the NewsGuild.

So far, the NewsGuild leadership has also declined to do anything to further investigate the incidents surrounding Fuoco’s exposure as a serial sexual predator, and around Tanner.

An investigation into the union’s handling of sexual misconduct within its ranks could implicate NewsGuild President Schleuss in the cover-up. However, Schleuss also watched Tanner assault and physically threaten me as I attempted to do my job as a reporter. He did nothing to stop the attack.

Emails obtained by Payday Report showed that Schleuss was aware of Fuoco’s sexual misconduct allegations since at least December of 2019 and had actionable written evidence depicting sexual assault since August of 2020. Yet Schleuss refused to take action.

The silence by both the NewsGuild and the Pittsburgh Post-Gazette raises troubling questions about intimidation and threats of retaliation that many journalists face when reporting on sexual misconduct both within newsrooms and the labor movement.

Now, Schleuss has refused to open an investigation into the physical assault and violent threatening emails that I have received by an officer of the NewsGuild after revealing a cover-up of sexual misconduct within the union.

According to a study released by the National Women’s Law Center in October, 72% of workers face retaliation when reporting sexual misconduct in the workplace.

By refusing to take action against violent retaliation for reporting sexual misconduct, Schleuss may be contributing to a culture that already makes it too difficult for people to come forward about sexual misconduct.

Donate to Help Us Take on Sexual Misconduct in the NewsGuild