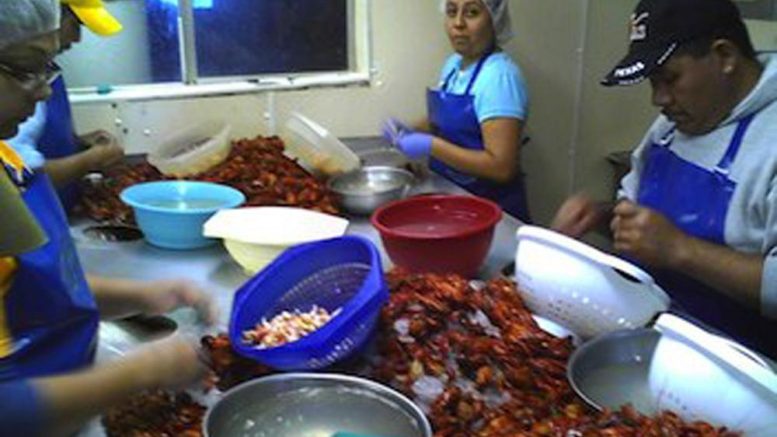 Payday Senior Labor Reporter Mike Elk filed a dispatch from Lafayette, Louisiana looking at how undocumented workers in the seafood industry are organizing to push back:

At a recent meeting of workers, Andres quickly slathered a thick coat of mayonnaise on a tortilla with fried shrimp and habanero sauce as he rushed to take his seat at the head of a table where three dozen seafood worker gathered in the community room of the Lafayette public library.

All of a sudden, 34-year-old Danilo Balladares, an organizer with the Seafood Workers Alliance, stood in front of the room and began to clap. Soon, the rest of the room, black, white and brown alike, joined in the clapping. Gradually the clap got louder and more upbeat as cries of “rrrrrr” broke out. Balladares stopped the clapping and called the meeting to attention.

“All the people here could be fired,” said Balladares, pointing to Andres and the leaders of Seafood Workers Alliance seated at the front of the room. “They could be fired and sent back to their country if their employer knew they were here.”

Formed in 2017 as an offshoot of organizing being done by the National Guestworker Alliance and the New Orleans Workers’ Center for Racial Justice the Seafood Workers Alliance has hundreds of members in 15 different plants throughout Louisiana.

For more, go to the Guardian to read the full dispatch from Lafayette, Louisiana.