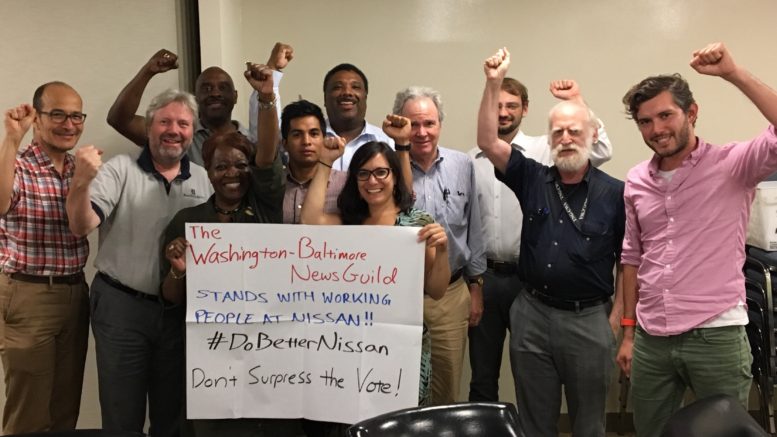 It’s Payday! Greetings from the farm in Goshen, Ky., where Payday Senior Labor Reporter is preparing to take off for Canton, Miss., as soon as he can raise the money.

Folks, Payday is on a fundraising tear as we prepare to raise the funds to go down and cover the historic union election at Nissan in Canton. We expect—between hotels, gas, food, and beer—to have to spend more than $1,000.

In the last 12 hours alone, Payday has raised $415 dollars to help us get to Canton.

Let’s keep the momentum going. Donate and spread the word on Facebook.

However, he added that things could change as Nissan attempts to dissuade workers.

“A campaign can change from day-to-day and this will depend on employees at the plant,” Williams told reporters. “But we felt very strongly that the time for us was now.”

The election is set to take place August 3 and 4 in Canton.

The UAW has said that in the week since announcing the union drive Nissan has stepped up its illegal anti-union campaign.

The UAW says that it is preparing to file new unfair labor practice charges against Nissan. However, at the time of publication, the UAW did not specify exactly what charges it intends to file against Nissan.

“Nissan has made it abundantly clear that it does not respect its Mississippi employees’ rights to vote in a free and fair election,” UAW Secretary-Treasurer Gary Casteel, an Alabama native said in a statement put out by the UAW. “In fact, the company is running one of the most aggressive anti-worker campaigns that we’ve seen in modern U.S. history.”

In 2015, the National Labor Relations Board charged that the company and its temporary employee agency provider, Kelly Services, violated workers’ rights, with one manager threatening to close the plant if it went union. Although Nissan has said it is defending against the charge, the NLRB added new complaints against Nissan and Kelly Services in April of this year for additional threats of closure. The NLRB also charged the company with breaking labor law by having security personnel perform unnecessary security stops on union members.

A major boost to the union campaign at Nissan has been the backing of more than 300 Mississippi clergy.

“It plays a big role because a substantial number of these people that work at Nissan profess church membership,” says NAACP organizer Frank Figgers, Co-Chair of the Mississippi Alliance for Fairness at Nissan. “The South and Mississippi, in particular, is the bible belt. By having clergy on board, it gives people a sense that they are not isolated.”

Figgers’ co-chair at the alliance is Reverend Dr. Isiac Jackson Jr., president of the General Missionary Baptist State Convention of Mississippi, which held its conference in Jackson this week.

Reverends from around the state recorded messages of solidarity to show support with pro-union Nissan workers.

A win at Nissan could set off a wave of union organizing across the South, a region that many feel is ripe for organizing.

A win at the 6,000-person Nissan would likely lead unions to invest significant resources in organizing nearby plants.

The Democratic Socialists of America have quickly emerged as a site of organizing for many of the young activists that were attracted to Bernie Sanders’ campaign.

Since the election of Trump, the dues-paying membership of DSA has more than tripled. DSA now boosts a membership of 24,000 members, who pay approximately $45 a year to join the organization.

With new members flooding into the organization, their convention in Chicago, being held August 3–6, has quickly become a focal point for many young leftist activists. However, despite the growth of DSA chapters in the South, many Southern activists are complaining that they are underrepresented on the leadership slates running for seats on DSA’s National Political Committee.

According to a new report in The Nation by North Carolina labor reporter Paul Blest, there are now 40 chapters of the DSA in the South; many of them, new chapters.

The frontrunner slate, DSA Momentum, contains activists from big cities in the North, Midwest, and West Coast, but none from the South.

The underdog slate, DSA Praxis, does contain Allie Cohn from Knoxville, Tennessee and Leslie Driskill from Oklahoma City on the borders of the South. The lack of Southern candidates in the race has also inspired North Carolina labor activist Bryan Conlon to hop into the race as an independent candidate.

“The DSA, unless it fully moves into being a broad-based organization with support and leadership drawn from across the country, will fare no better than those socialist groups who came before us,” says Conlon. “The only way to beat the Right anywhere is to fight it everywhere, even where it is strong, and there is no place in this country that the Right has had a stronger grasp than in the South.”

This week, a special session of the Texas Legislature began. Gov. Greg Abbott has signaled that a top priority of his will is taking dues checkoff from public-sector unions in the state. Hundreds of teachers rallied at the State Capitol to protest the law.

The Austin-American Statesman reports that Troy Reynolds, a Texas school district administrator, and advocate for public education said, “When the voices of all of us, along with the parents and community members who support us, rise up in the next election, first, they will fear us, then finally they will hear us. Save our public schools.”

Ken Zarifis, president of the Austin Education Union, told the Statesman, “They want to push through a ridiculous $1,000 teacher pay raise that will be put on districts, not the state. It’s going to be tied to accountability and merit. They’re doing that to tease people…to give up teacher rights, to make it easier to terminate, to give up your voice as a union member by taking away payroll deduction.”

Another bill slated to be debated in the Texas Special Session is House Bill 164.

The City of Austin has passed “better builder” laws that allow builders to expedite the building process if they agree to pro-worker provisions. These “better builder” provisions require employers to pay a minimum wage of $13.50 an hour, agree to certain safety standards, and adhere to workers compensation laws.

H.B. 164 would bar cities from making such laws.

Worker groups are opposing the legislation.

On Sunday, beloved Durham activist Umar Muhammad, an organizer with the Southern Coalition for Racial Justice, was killed when he was hit while riding his motorcycle.

The Herald-Sun has a look at how Muhammad practiced what he preached when it comes to restorative justice:

Someone had broken into his storage shed and stolen five bikes.

He posted it in on Facebook in May, asking the community to help him find his bikes, asking if the person who had taken the bikes needed a job and saying he wanted to get at the root cause behind the theft.

“I feel that in order to practice what I preach, I have got to rely on community,” he said. “It ain’t about shooting whoever’s riding down the street on my bike or jumping and causing some harm to them. It is about restorative justice and community being a stake for their own change, and I need the community to help me get my bikes back.”

Read the full obituary at the Herald-Sun.

Nearly all tourists who have driven between North Carolina and South Carolina have noticed the massive tourist attraction known as South of the Border. However, few people realize the radical activist roots of its owner.

The Post-Courier has a fascinating look at the civil rights history behind the famed roadside complex:

In the predominantly Southern Baptist farming community of Hamer, Schafer’s Jewish heritage distinguished him as a minority, a position he used not only to stretch the conservative mores where alcohol was concerned but to obscure racial boundaries.

Schafer not only routinely employed African Americans and other minorities, but he helped register them to vote, as noted in King’s book and a Schafer family memoir archived by the Jewish Historical Society of South Carolina. Schafer stood up to angry Klansmen over South of the Border’s diverse workforce, according to the memoir. The confrontation ended with a rifle-carrying Schafer demanding that the mob depart.

Coming from a man whose roadside attraction was built on cultural stereotypes and what many consider blatant racial insensitivity, it’s a contradiction that has not gone unnoticed.

“In the context of today’s political climate of racism, anti-immigrant and anti-Semitic prejudice, South of the Border is a place that can push us to both reflect on the South’s fraught history of slavery and inequality, and to see beyond the simplistic white/black binary of Southern race relations,” said King, the tourism book author. “Considering the Pedro caricature at SOB in particular, and the stereotyping of our Latinx community in general, prejudice and hate are things we, as a society, ignore at our peril.”

— The Atlanta-Journal Constitution takes an in-depth look at how the much heralded Atlanta BeltLine has lost its commitment to affordable housing in its development.

– Finally, labor historian Erik Loomis commemorates the anniversary of the 1891 Coal Creek War, when poor whites in Tennessee rose up in armed rebellion against convict labor, eventually forcing the prohibition of it in Tennessee.

Donate to our gas & beer fund so that we can go down to Canton, Mississippi and cover the historic union election at Nissan.

Be the first to comment on "UAW Confident in Nissan Union Votes – 300 Miss. Clergy Back UAW – DSA Underrepresents the South"