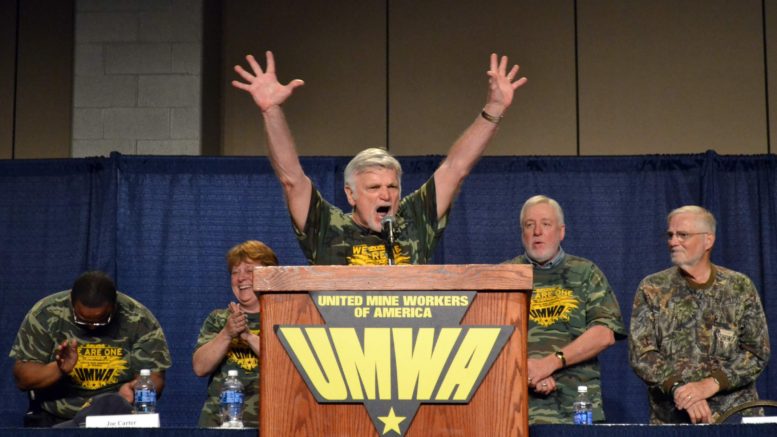 Greetings from our temporary Northern winter camp in Conneautville, Pennsylvania, where there are six inches of snow on the ground.

This week’s Lunch Pail Award goes out to Steelworkers Local 1999 President Chuck Jones, who was personally attacked by Donald Trump on Twitter this week.

Check out this ill ass video of an epic MC battle thrown at Steelworkers Local 1999 union hall back in November. No wonder Trump be hating #ImWithChuck.

Senate Democrats appear to be engaged in a game of chicken with Senate Republicans over whether or not they intend to shut down the government if the Legislature doesn’t guarantee pensions and benefits to retired coal miners negatively affected by a series of bankruptcies in the coal industry.

16,000 retired coal miners and their beneficiaries are expected to lose their benefits at the end of the month unless action is taken. Senate Majority Leader Mitch McConnell (R-KY) has proposed a stop-gap measure that would extend their benefits for another four months. However, Senate Democrats are hinting that they may be willing to shut down the government unless they get a year extension.

It’s unclear if Democrats will carry through on their threat. However, the high-profile fight pits Trump against his base of white working class voters in Appalachia, who voted for him in large numbers; a government shutdown over providing health care for coal miners could put Trump in a politically awkward position.

“[Senate Republicans] totally gave the back of their hand to miners,” Sen. Claire McCaskill (D-MO) told a press conference on Capitol Hill Thursday. “Now, who’s for the working people? Where is Donald Trump on miners? Crickets.”

Payday was the first outlet to report on the influence of Alliance Resource Partner CEO Joe Craft, who gave over $400,000 to McConnell in his 2014 re-election bid.

“Mitch McConnell has frittered away the last two years, and this needs to be dealt with this year because some of these miners are going to have no income after the first of the year,” Murray told E&E News.

Murray was also quick to point the finger at Craft as being the reason why McConnell has refused to bring the full bill to a vote. Murray says that Craft is blocking the measure because he wants to hurt his unionized competitors like Murray, who pay into the United Mine Workers Pension and Retirement Fund. If there is no bailout of the fund and it collapses, Murray’s legal liability to contribute more money will significantly increase, putting him at a competitive disadvantage.

“They opposed [the bill] because they thought Murray Energy was getting some kind of benefit out of it and we’re not,” Murray told E&E.

With our limited resources, Payday has already had a significant impact on many big national labor stories.

Payday was the first media outlet to report that Alliance Resources Partner CEO Joe Craft may have been blocking the Miners Protection Act from coming to a vote. Payday also was the first outlet to expose how low wages, worker intimidation, and safety violations may have contributed to the Chattanooga school bus accident. Our exposé garnered over 40,000 views and led State Senators to call for hearings into school bus privatization.

Donate & become a dues-paying reader of Payday Report for $3 month so that we keep doing the type of stories that make an impact on workers’ lives in the South.

In an Oct. 25 email to state officials, Garrett Wyckoff, senior manager of business recruitment for the Economic Development Partnership of North Carolina, said he changed the status of the CoStar project to “Closed Lost.”

“It is my understanding that we lost the project. I have selected the following reason for this status change: Local issues,” Wyckoff wrote in an email obtained by the Observer through a public records request fulfilled Thursday. For further explanation, Wyckoff added: “Spring 2016 Legislation.”

The Observer reported last month that CoStar’s CEO ran into opposition from his board over HB2 when he sought approval to enter final negotiations to expand in Charlotte.

CEO Andrew Florance was “broadsided with (the board’s) pushback over the HB2 issue in Charlotte,” Jeff Edge, a Charlotte Chamber official who was recruiting the company, wrote in a Sept. 20 email obtained by the Observer from the city of Charlotte. “They have re-opened the competition to look more closely at Atlanta and Richmond now.”

“Heaven knows how many deals we’ve been crossed off the list and didn’t know we were even being considered for since March,” Edge added. Real estate sources have also told the Observer that CoStar passed over Charlotte because of the law.

For more, check out the News & Observer.

With Texas Lt. Gov. Dan Patrick signaling that a top priority of his is passing anti-LGBT legislation similar to North Carolina’s HB-2, the Texas Association of Business is out with two new studies warning the state against passing such a bill.

The studies, performed by St. Edwards University, which surveyed potential investors and examines the effects of anti-gay laws in others states, show that Texas’s economy could lose anywhere from $964 million to $8.5 billion in economic revenue.

“We now face overwhelming data about the risk of damage to the economy and reputation of our great state resulting from legislation that would allow for discrimination,” Texas Association of Business President Chris Wallace told a press conference in Austin on Tuesday. “Businesses from across Texas have come together to urge the Texas Legislature to reject discrimination and embrace public policy that keeps Texas open for business.”

Chattanooga Demanding $13 Million Back After GE-Alstom Decides to Move

While Donald Trump is giving tax breaks to persuade companies like Carrier to keep jobs in the U.S., Chattanooga, on the other hand, is threatening to sue companies for back wages if they move production and take away 235 jobs from the region.

Over the last decade, the City of Chattanooga and Hamilton County, Tennessee have given GE-Alstom over $13 million. Now that the jobs GE promised are leaving, they want their tax money back.

Helen Burns Sharp, founder of the Chattanooga-based Accountability for Taxpayer Money (ATM), told the Chattanooga Times Free-Press, that she “hopes that the [GE Alstom] experience will be a wake-up call to our elected officials about needed changes to the local process for reviewing tax break requests and enforcing the terms of agreements.”

The measure is expected to affect 500 business in Portland and generate $3.5 million in annual revenue for the city.

Finally, late Thursday Night, Boston Radio Station WEII.com reported that former New York Mets Manager Bobby Valentine, a Trump backer in the election, may be appointed as ambassador to Japan. While he has no diplomatic experience, Valentine did coach, from 2004-2009, the Chiba Lotte Marines, a Japanese Pacific League baseball team, and claimed to have extensive networks of contacts in Japan.

However, the posting as U.S. Ambassador to Japan would not be Valentine’s first experience in a government position. Back in 2011, Valentine was appointed as Director of Public Safety in Stamford, Connecticut, where he pushed for wage concessions from public workers despite the city running a surplus.

Back in 2012, The Nation Sports Editor Dave Zirin and Payday Senior Labor Reporter Mike Elk teamed up for the Nation to look at Valentine’s time there:

“This is the ultimate 1% percenter town. This is where a lot of Wall Street bankers live,” says Jeff Dinnan an auto mechanic for the city’s police department who is President of UE Local 2222 sublocal 82. “Stamford doesn’t have a revenue problem. Stamford is doing very well.”

In addition to pushing for massive concessions, public safety workers in Stamford say that Valentine was completely missing during the largest natural disaster in Stamford’s history – Hurricane Irene. Hurricane Irene left 60 people sleeping in a High School gym, causing millions in damages. Where was Valentine? He was in Texas that weekend broadcasting a game for Sunday Night Baseball. “Here we are responding to this huge situation and the guy is off in Texas broadcasting a baseball game. It just really said something about his priorities,” says Dinnan.

The Atlantic interviewed over 100 workers as part of their Inside Jobs series. Check out their interactive database of all fascinating interviews with a variety of people from across the spectrum of American life.

Last week, a group of left-wing protestors scared a group of KKK protesters from demonstrating in Danville, Virginia. Our friends over at Scalawag have a colorful photo gallery of how the protestors did it.

NBCNews.com has a moving profile of Sam Park, the first openly gay state legislator elected in the state of Georgia:

Park will be representing over 85 thousand residents living in Gwinnett County, the second-most populated county in Georgia. He said his bid for office was prompted by his mother’s cancer diagnosis in 2014. She was given six months to live, but they were able to find treatment options through Medicare and Medicaid.

“When my mom was diagnosed, everything kind of hit home in terms of what I wanted to do with my life, and who I wanted to serve,” Park said. “It dawned on me that having access to healthcare is a matter of life or death.”

His mother is now working toward partial remission, and Park is hoping to ensure all Georgians have access to healthcare by expanding Medicaid in the state during his time in office.

NPR has a sneak peek this week at a new protest song “Rican Beach” out by Louisiana-based band Hurray for the Riff Raff protesting the horrors of gentrification. Puerto Rican lead singer Alynda Lee Segarra says the song is dedicated to water protectors at Standing Rock and those protesting coal ash contamination in Penuelas, Puerto Rico.

“Now all the politicians they just squawk their mouths / Said we’ll build a wall to keep them out,” sings Segarra. “And all the poets were dying of a silence disease / So it happened quickly and with much ease.”

Check out the song here.

That’s all for today, folks. Be sure to donate to Payday Report so that we can pay our Obamacare premiums.

Mike Elk is an award-winning labor reporter and a member of the Washington-Baltimore NewsGuild. He previously served as senior labor reporter at POLITICO, a workplace safety expert at MSNBC, and as an investigative reporter at In These Times Magazine. In 2015, using his NLRB settlement from being illegally fired for union organizing at POLITICO, he founded Payday Report in Chattanooga, Tennessee.