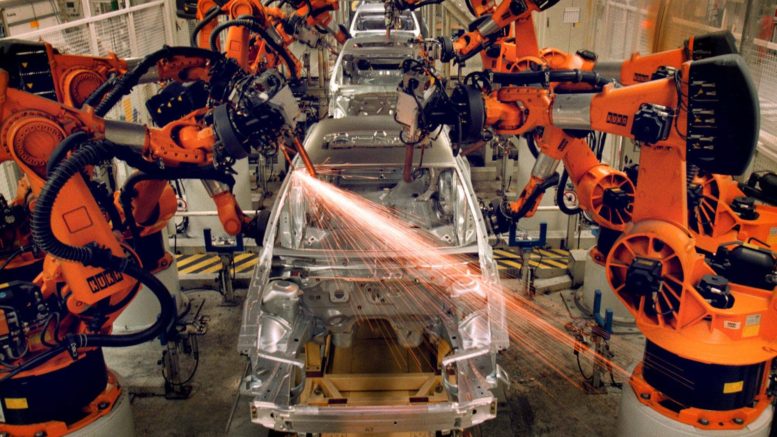 20 year-old Regina Elsea of Five Points, Alabama was in the final stage of planning her wedding to her fiance Josh. Then, on June 18, two weeks before the wedding, a problem occurred at her job as a temp worker employed by the auto supply company Ajin in Cusseta, Alabama, which supplies parts to Kia and Hyundai.

The auto assembly line was halted as a sensor on a robot appeared to be malfunctioning. Regina and three of her co-workers entered the robotic station to attempt to fix the problem. Then, all of a sudden, the robot turned back on, crushing Regina and knocking her unconscious.

She died the next day at University of Alabama Birmingham Hospital.

OSHA found that Ajin failed to follow properly a set of basic safety procedures to de-energize and shut down robots before workers attempted to fix them. As well, OSHA found that the company failed to provide workers with locks to ensure that the machinery would not move while they were fixing it.

“This senseless tragedy could have been prevented if Regina Elsea’s employers had followed proper safety precautions,” Dr. David Michaels, assistant secretary of labor for Occupational Safety and Health said in statement announcing the fines.

In fact, in 2015, Michaels traveled to Korea and warned both Kia and Hyundai that the production practices of their suppliers in the American South where unsafe and could lead to a death such as Regina Elsea.

“Kia and Hyundai’s on-demand production targets are so high that workers at their suppliers are often required to work six and sometimes seven days a week to meet the targets,” said Michaels. “It appears that – to reduce its own costs in meeting these targets – this supplier cut corners on safety, at the expense of workers’ lives and limbs.”

According to National Employment Law Project Senior Fellow, Deborah Berkowitz, who served as chief of staff of OSHA from 2009-2013, the $2.5 million fine is larger than any fine OSHA issued in all of 2015, and one of the largest that agency has issued under the Obama administration. It comes as part of a broader effort to crack down on workplace injuries in the Southern auto industry.

“This will be a wake-up call throughout the [auto] industry that you can’t just kill workers on the job,” says Berkowitz.

The program has drawn criticism in the past from Southern lawmakers. In a 2014 letter to Labor Secretary Tom Perez, Alabama Congresswoman Martha Roby accused OSHA of targeting Southern auto plants with inspection in order to help union drives.

“Absent a compelling rationale grounded in fact, OSHA’s targeted enforcement tactics become susceptible to charges that they are at best arbitrary, and at worst discriminatory,” wrote Roby. “It is understandable that many perceive these steps to be part of a coordinated effort to advance a pro-union agenda within the growing Southeastern automotive manufacturing industry, which is thriving due in part to the pro-business environment and skilled workforce found in our region.”

Given the previous controversy, the program could be one of the first scrapped under the Trump Administration, which has already promised to roll back workplace regulations.

“People are very concerned that enforcement, even the small enforcement that there is right now, will be cut back,” says Berkowitz. “It’s really important that government retain its ability to go after the worse violators and make it clear that cutting corners will not be allowed. If not, American workers are going to get hurt and their fatality rate is going to go up, and that’s a sacrifice that American workers shouldn’t have to make.”

Mike Elk is an award-winning labor reporter and a member of the Washington-Baltimore NewsGuild. He previously served as the senior labor reporter at POLITICO, a workplace safety expert at MSNBC, and as an investigative reporter at In These Times Magazine. In 2015, he used his NLRB settlement from being illegally fired for union organizing at POLITICO  to found Payday Report in Chattanooga, Tennessee.

Be the first to comment on "Following Death of a Temp, Alabama Auto Supplier Fined $2.5 Million"