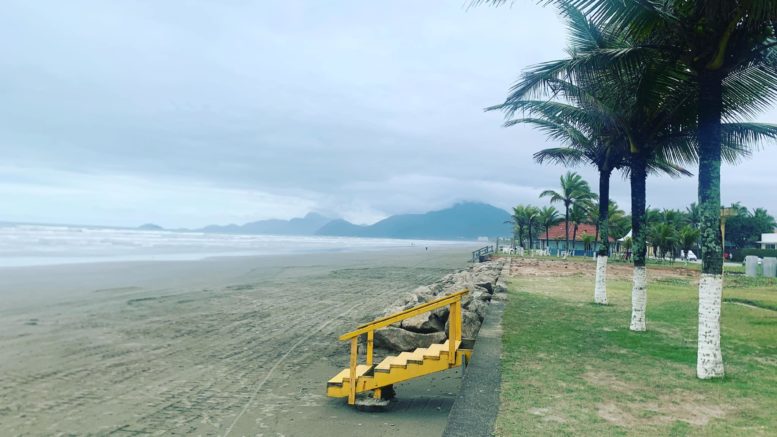 Peruíbe, Brasil – Peruíbe has one of the longest, most pristine beaches in the state of São Paulo. Bordered by the mountains of the 200,000-acre Juréia-Itatins Ecological Reserve, it’s a popular weekend destination for tourists to escape from the rampant pollution in the 12 million-person mega city of São Paulo.

Unlike the urban crowded beaches in major cities like Rio and Salvador, the beaches of Peruíbe are pristine and rarely crowded. The Reserve contains mountains, rainforests, waterfalls, and beaches that are only accessible by hiking to them.

While covering the fight of trade unionists against Bolsonaro in Brazil, I was invited by members of the 2.1-million-member Força Sindical federation to visit there. A beautiful two-hour drive through rainforests from São Paulo, the area is skirted with the vacation homes of São Paulo’s rich.

However, just two blocks from the beach sits a place where working-class union members can stay for well below market place: “colônia de férias,” which in English roughly translates to “vacation colony.”

The São Paulo Hotel workers union Sinthoresp has owned their colônia since 2004. The four-floor complex contains about 40 rooms, each including a queen-sized bed, a set of bunk beds, a TV, a balcony, and a private bath.

In addition to the rooms, the roof features a view of the surrounding mountains and the Juréia-Itatins rainforest, complete with a bar. On the bottom level of the complex, there is a playground, another bar, and a full-service dining room that serves a full buffet three times a day.

For only R$100 reals a day per person, which includes all three meals, union members can stay at the complex. In comparison, the cost of one meal at an equivalent Brazilian bar and restaurant in the resort town can range from about $R25 to $30 per meal. For Brazilians, who make on average, R$8,500 a month, the price is very affordable.

“So many of our members, who wouldn’t be able to afford to go on vacations in places like this can because we own this colônia de férias,” says Rubens Fernandez Silva, the secretary general of Sinthoresp.

These vacation colonies provide a cheap place to stay while serving excellent food in the small dining hall, all-you-can-eat buffet style. Many union members gather and talk over beers for hours here.

“It’s great because they are so many people that come to these colônia de férias, who wouldn’t go to union meetings,” says Orteilo Palacio Cuesta, the international coordinator of Força Sindical, who serves as a guide on our trip to Peruíbe.

“Having colônia de férias like these make it easy for union members to get to know one another while on vacation and get involved in their unions in fun ways,” he says.

An hour and a half up the road from Peruíbe in Santos, Brazil, you’ll find Avenida dos Sindicatos (translated as Avenue of the Unions). It’s just one block from the 24-kilometer-long urban beach that’s made Santos a hot spot for tourists. The complexes there contain not just places for people to stay, but also soccer fields and volleyball courts where union members organize large events in the summer months.

“It’s just packed in here in the summer months,” says Cuesta. “People are playing games and having fun.”

Now, though, these much beloved colônias are on the chopping block as Bolsonaro has implemented new laws that have cut the budget by as much as 40%.

First established in the 1960s, the more than two dozen colônia de férias along the Avenida dos Sindicatos in Santos can house up to 10,000 union members at a time. Many unions take pride in designing massive logos and you can see the various union logos proudly displayed as you walk back from the beach along Avenida dos Sindicatos.

Inside the colônia owned by the tire workers union Sintrabor, is a massive union hall that can seat several hundred members. The walls are adorned with photos of the history of the union with photos depicting how tire workers fought against the dictatorship in the 1980s. Other photos include those from more recent struggles against major multinationals like Firestone.

“Here, we do a lot of training for when we have big contract campaigns,” says Cuesta. “It really helps a lot to be able to have this big space, where we can bring people together and spend a weekend talking about our struggles as union members.”

When I explain to my hosts that there is no equivalent of similar vacation spots owned by Americans for unions, they are shocked. For Brazilian trade unionists, these locations have become essential to maintaining a sense of solidarity and union identity forged when members come to stay at them.

For decades, every Brazilian worker was required to pay the equivalent of one day a year’s salary into a fund that would be evenly distributed to unions in their region. These funds allowed Brazilian unions to expand and invest in things like these colônia de férias.

However, Bolsonaro, who pledged to eradicate unions closely allied with the opposition Workers Party in Brazil, passed a law in 2019 that stripped Brazilian unions of this yearly contribution by Brazilian workers, requiring every union member to choose whether they wanted to give money to individual unions.

To meet the financial crisis brought on by the loss of funds, many unions began selling their colônia de férias in high-priced vacation spots to keep their unions alive.

“It’s a shame that we are losing so many of them,” says Ruth Coelho Monteiro of Força Sindical as we sit, drink beers and talk about the stakes of the upcoming presidential election inside the dining hall of their colônia. “This is how you build solidarity by sitting, talking and enjoying each other’s company.”

Donate to Help Us Cover the Brazilian Presidential Election