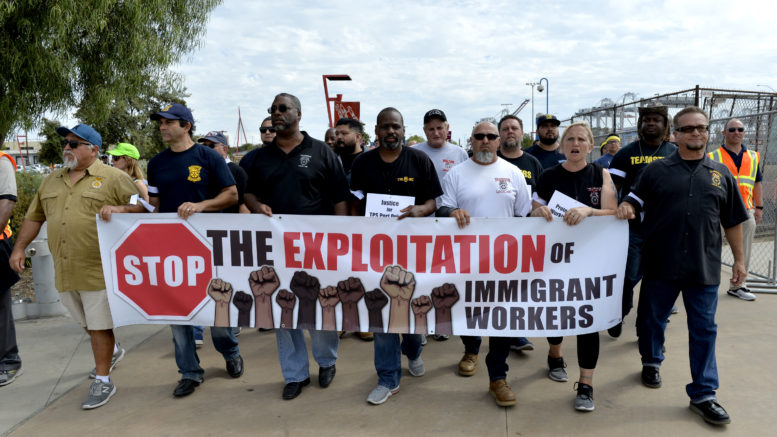 Greeting from Washington, D.C, where Payday has had a very positive series of meetings with potential funders.

Folks, the one thing that has helped us a ton as an organization as we approach potential funders is the strength of our grassroots readers, who have kept this publication alive over the past two years.

Across the nation, UNITE HERE has been engaged in a series of rolling strikes that have shut down dozens of hotels in nearly a half dozen cities.

In Boston, yesterday, while workers were picketing the Ritz-Carlton, owned by Marriott, protestors filmed members of the New York Yankees brazenly walking through the picket line on the way to their hotel. The move outraged local union officials.

“We understand that there’s a very intense rivalry between the New York Yankees and the Boston Red Sox, but quite frankly we’re a little outraged they would take it out on working class people who are out here sacrificing to improve their livelihoods,” Unite Here Local 26 President Brian Lang told Boston Magazine. “This is a slap in the face to all Bostonians.”

The Yankees did not respond to a request for comment from Payday Report earlier today, despite the organization granting us credentials to cover its 2018 spring training.

However, the Major League Players union did declare solidarity with the striking workers.

“From what we understand, these workers have been trying to negotiate a fair contract for more than six months. They deserve to be heard and deserve our support,” said the Major League Players Association in a statement to Deadspin.

(#TBT check out our classic in the Guardian from spring training “Baseball, Latino America’s Pasttime Faces New Challenges in the Age of Trump”)

For over 28 days, more than 1,000 Hyatt Workers in Chicago struck in order to demand a new contract. Now after nearly a month on the picket line, the workers have reached a settlement.

The excellent Jeff Schrucke at NewsGuild-represented In These Times Magazine has the story:

The victory comes just hours after Third Coast International Audio Festival (TCIAF)—a small arts nonprofit based in Chicago—made the difficult decision to move their annual conference out of the Hyatt Regency McCormick Place the night before it was set to begin.

TCIAF promotes all forms of audio storytelling, including radio, podcasts and live events. The conference brings together independent producers and journalists from around the world and is held every fall in conjunction with The Fest—a two-week lineup of podcasts recorded live on-stage across the city, described by Chicago Tonight as a “Sundance of Radio.” Over 800 attendees are expected at this year’s conference.

“We’ve been working on planning this conference for a year. We pour our hearts and souls into it,” conference organizers told In These Times over email, noting that TCIAF has only three full-time staff members.

Since the strike began, TCIAF staff say they urged the Hyatt to concede to the workers’ demands, and, based on conversations with the hotel, were confident that an agreement would soon be reached. Organizers feared that having to change venues would be financially untenable for the small nonprofit and hoped the Hyatt would settle a contract with workers ahead of the conference, just as other struck hotels such as the Hilton and Marriot did.

On October 2, two days before the conference was set to begin, TCIAF staff issued a letter to Hyatt management expressing support for striking workers with UNITE HERE Local 1. By the next day, with no end to the strike yet in sight, a decision had to be made.

For more on how a final deal was reached, go to In These Times.

In Louisville late last week, a meeting of the Louisville DSA at the Silver Dollar restaurant was broken up by 8 members of the far right white nationalist group, the 3 Percenters.

The alternative media collective Unicorn Riot has the story:

The group stood outside the Silver Dollar and yelled at individuals, “take your socialist, commie bullshit and get the fuck out of here,” “don’t come in my goddamn area anymore.” According to Louisville DSA, the social event was taking place on the outside patio “so they were able to come up next to our table.” The staff clearly asked the Three Percenters to leave, and the confrontation quickly escalated into an apparent assault against DSA event attendees and restaurant staff.

DSA members and restaurant staff that were sprayed were immediately treated for chemical burning on their eyes and face. The attackers continued yelling messages that seemed intended to intimidate, such as telling DSA meeting attendees that they were watching their every move.

When asked to leave the area, one of the men can be heard on video responding “Why don’t you make me leave, huh?,” in an apparent attempt to provoke a violent response.

For more, go to Unicorn Riot.

On Wednesday, a half-dozen tractor-trailer driven by immigrants, whose statuses are under threat by the repeal of Temporary Protected Status (TPS) for refugees, surrounded the LA Detention Center. Through the repeal of the TPS program, more than 300,000 immigrants are likely to lose their legal status to work in the U.S.

The action, which has part of a three day strike of port drivers demanding labor rights, marks the first time that the Teamsters engaged in direct action on behalf of immigrant workers.

Ron Herrera, vice president of the Western Region for the International Brotherhood of Teamsters, said that the action is part of a new era in the Teamsters Union, where they intend to advocate more vocally on behalf of their immigrant members.

“We’re a little late and we were never at the front, but when the dynamics of our people changed we had to change with it,” Herrera told BuzzFeed News. “We realized a majority of workers we’re trying to organize are TPS holders and immigrants. A lot of them were predominantly immigrant Hispanic.”

New Data: 5% of All US Teachers Went on Strike Last Spring

Nationwide, over 5% of all teachers went on strike last spring

The strike wave was by far the largest mass strike of teachers in over 25 years.

For decades, Ken Ward Jr. of the Charleston Gazette-Mail has covered stories of workplace and environmental abuse that otherwise would go completely ignored.

Now, he has been recognized as the recipient of the MacAthur Genius Grant award. The grant will give Ward $625,000 over 5 years to support Ward’s journalism

“This shows the importance and value of the kind of journalism I believe in, and that most of us have been trying to do for decades here,” Ward said in a statement. “This incredible honor from the MacArthur Foundation is a strong vote of confidence in local journalism and, more to the point, in local journalism that doesn’t just parrot the official line but questions, and holds accountable, powerful people, industries, governments and other institutions that might not be acting in the public interest.”

For more on Ward’s career, go read the full write-up at the Charleston Gazette-Mail.

— September 30th marks the 99th anniversary of the Elaine Arkansas Massacre, where over 200 sharecroppers were killed while striking for their rights. BlackPast.org has a look at the importance of the event.

— Over at Bloomberg Environment, NewsGuild activist and labor reporter Fatima Hussein has a look at the challenges facing racial justice activists involved in the environmental justice movement.

— Finally, Dave Jamieson, at the Writers’ Guild represented HuffPost, has a long look at how the Janus decision has helped revive the Illinois Teachers’ Union:

“We offer extremely good services for our members, but we realized if we don’t shift to an organizing model, we might get decimated,” said Jeff Adkins-Dutro, a Peoria English teacher who also serves as the local union president. “In my opinion, this is really going to strengthen our union.”

The transition requires a change in thinking and a lot of legwork. That’s why teachers like Innis and Grace gave up some of their summer break, taking part in an internship program organized by unions and a community group. They sat through seminars run at their local union hall across from the Illinois River, then hit the pavement to speak with teachers about school funding and whatever else they had on their minds.

They also urged their fellow teachers to sign “recommitment” cards, pledging to stick with their union even if the Supreme Court decision gave them a financial incentive to cut ties.

“The Janus decision, for me, just solidified me getting active in my union,” said Grace, 33, who is in his third year of teaching middle school. “I think we’re at the point where we’ll need a whole new labor movement, or the [economic] disparity will just become too great.”

For more go to HuffPost.