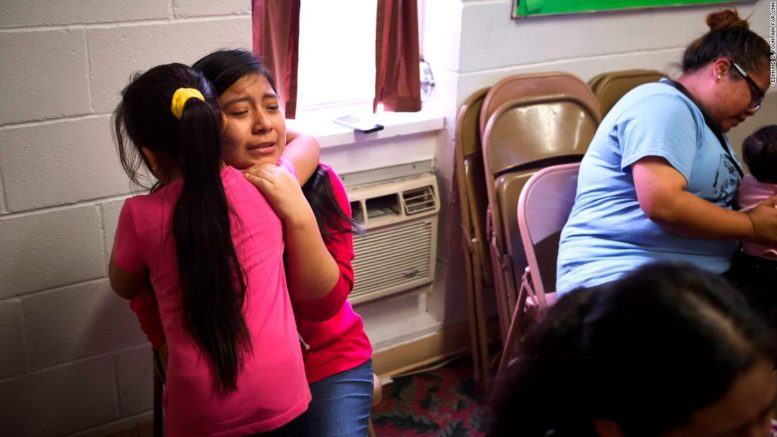 Earlier this month, a record-breaking ICE raid detained over 600 immigrant workers at several meatpacking plants in Mississippi. Quickly, images of small children stranded at school, after learning that their parents’ detention by immigration authorities, began appearing on TV.

“I need my dad,” one 11-year-old girl Magdalena cried in a viral CBS video.”I am not going to have nothing for the first day of school for me. My dad bought me everything for me to live over here. The rent. Now, I don’t know where I am going to eat.”

Increasingly, teachers are being asked to step in to help children affected by the terror and trauma of deportation.

“While children in Mississippi were at their first day of school, their parents were being rounded up by the government,” says American Federation of Teachers President Randi Weingarten. “Those kids came home ready to talk about what they learned at school, who they met and what they saw, only to be greeted with abject fear at the hands of a cruel government policy designed to terrorize an already frightened community.”

Over 2.5 million undocumented youth attend public school in the United States, where they are faced with the constant risk of choosing whether to risk deportation by attending school. An additional  4.1 million public school children, who are U.S. citizens, live in a household, where one or both parents are immigrants.

“As educators, we know that separation from a parent causes trauma for a child that can impede learning opportunities and social and emotional health,” says Jackson Federation of Teachers President Akemi Stout, who was part of an AFT emergency response group that helped respond to the raids in Mississippi this month.  “Our members will do their part as frontline protectors of students.”

With millions of children affected by increasing ICE raids targeted undocumented workers,  many teachers feel unprepared for dealing with the trauma and anxiety suffered by their students from immigrant communities.  Many have looked to their unions for support in understanding how to heal the wounds created in the classroom by Trump’s immigration policies.

“We’ve become more and more the first responders to the issues affecting society in the Trump Era,” says AFT President Randi Weingarten. “There is now more trauma and he traffics fears and in dividing people and so educators have an immense responsibility.”

To deal with the crisis hitting immigrant children, AFT has developed training materials for teachers to use on how to prepare for students, whose parents are deported. Pamphlets such as the free online 40-page AFT guide for educators entitled  “Immigrant and Refugee Children: A Guide for Educators and Refugees and School Support Staff” and other resources on how to help communities in the wakes of ICE raids are all available on the AFT”s website.

The materials help train teachers on how to understand the psychological impact on children.

The AFT union has also developed a model curriculum, and sample lesson plans that educators can use to teach children about the politics of immigration.

The union has also organized rapid response teams with delegations. Members of the groups, consisting of skilled teachers and nurses from around the country are helping to train educators in the areas most affected by violence and immigration raids.

This month, the American Federation of Teachers sent large delegations to McAllen Border Detention Center and El Paso, where 20 were killed in a shooting at a Wal-Mart targeting Latino immigrants.

“There is a lot of fear out there,” says Weingarten.

Delegations of rank-and-file teachers and nurses, members of the AFT, have also traveled to Canton, Mississippi to assist local educators and community members in helping families. The union has helped provide legal support while working in conjunction with the United Food and Commercial Workers, which represented many workers at the plant.

The union plans to continue its works supporting immigration communities because for many being an educator is about more than just what you teach in the classroom.

“Educators have always had a huge responsibility for the next generation, and it’s just not teaching and nurturing students, it’s just not making our schools and classrooms safe, it’s not just helping young people develop skills and confidence and a sense of responsibility. We also fight for better policies in schools and communities to keep people safe and keep them from fear,” says Weingarten.