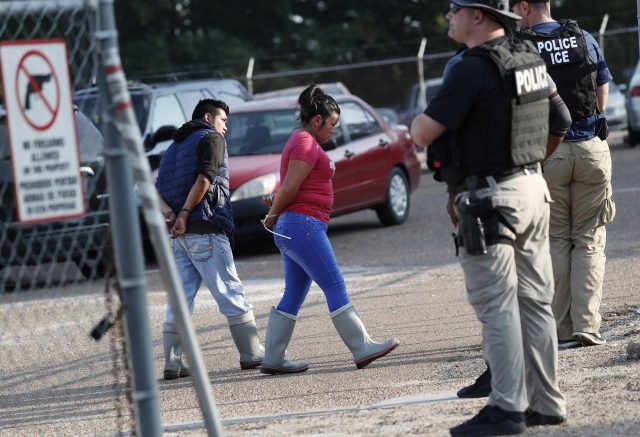 U.S. immigration officials raided several Mississippi food processing plants on August 7 and signaled that the early-morning strikes were part of a large-scale operation targeting owners as well as employees. (AP)

This week, scores of employers throughout the U.S. received “no-match letters” from the Social Security Administration, informing them that workers employed by them have invalid Social Security numbers and may be undocumented immigrants.

“People were just so afraid to leave the house that they didn’t go to work,” says Cal Soto, workers’ rights coordinator at the National Day Laborer Organizing Network (NDLON). “This is a huge economic hit to the finances of many immigrants and immigrant communities.”

This year alone, the Trump administration has already sent over 500,000 no-match letters to employers. Coming on the heels of a massive raid on poultry plants in Mississippi that saw more than 600 immigrants detained, the letters sent shock waves through the immigrant community over fears that raids may be coming soon to their workplaces.

“These no-match letters are like a silent raid,” says Soto. “It makes the boss even stronger, which makes workers a lot more vulnerable to all kinds of abuses.”

Immigrant worker advocates say that the effect of these workplace raids and no-match letters is sowing a sense of fear, preventing many workers from getting involved in organizing. Many advocates speculated that the poultry plants raided in Mississippi were targeted because workers there had been involved in organizing with the United Food and Commercial Workers, unionizing two of the seven raided poultry plants and winning a $3.75 million sexual harassment settlement.

“We’ve always thought there are risks when you’re a person who fights for your rights and their community in terms of social, economic, and racial rights. But at this time, raising our voices is also a motive for retaliation. We’ve heard that’s what happened in Mississippi,” says Rocio Aguilar, an organizer with the Congress of Day Laborers in New Orleans.

Paradoxically, immigrant worker advocates warn that workplace organizing is the only protection that immigrant workers have against the traumatic effects of Immigration and Customs Enforcement (ICE) raids. Without connections to worker advocacy organizations, many workers are unaware of their rights in the event of a workplace raid.

“The most important thing you can do in these situations is not panic, not to hand over any of your documents or say anything incriminating,” says Cristobal Gutierrez, a staff attorney with the immigrant worker center Make the Road New York. “If you know what to do ahead of time, you won’t panic, and you will reduce the chance of doing things that increase your chances of getting deported.”

Beyond training on how to prepare for ICE raids, being involved in a worker organization gives workers additional legal avenues to fight back. Some immigrant workers have been able to successfully fight deportation by claiming that the raid on their workplace is in retaliation for organizing.

“If we don’t have any organizing going on or a group where workers come together, you aren’t going to have the ability to bring in resources or allies when a raid does happen,” says Cal Soto. “People think about organizing as coming after a raid, but we need to think of a way to get that solidarity and network of support first.”

Some unions are starting to lead in training workers on how to fight raids. More than 30 national unions, including the Painters Union, UNITE HERE, the Ironworkers, the Bricklayers, the United Food and Commercial Workers (UFCW), Teamsters, and Laborers have launched the Working Families United coalition to get unions to focus more on immigrant rights organizing.

“Our union is a union of hard-working people, which includes immigrants; and we stand with all immigrant workers, who are trying to support their families and better their lives,” says Stuart Appelbaum, president of the Retail, Wholesale and Department Store Union, a division of the UFCW, whose union has developed a training program and rapid response to help workers in the event of ICE raids.

Other unions, like the American Federation of Teachers (AFT), have begun developing curriculum and rapid-response teams to help children traumatized by the effects that raids have on their parents.

“As educators, we know that separation from a parent causes trauma for a child that can impede learning opportunities and social and emotional health,” says Jackson (Mississippi) Federation of Teachers President Akemi Stout, who was part of an AFT emergency response group that helped respond to the raids in Mississippi this month. “Our members will do their part as frontline protectors of students.”

The National Day Laborer Organizing Network’s Cal Soto says that while unions are starting to step up to the plate to defend immigrants, the bulk of immigrant worker organizing is still being done by underfunded worker centers and immigrant rights groups like his.

“I think the unions need to be more at the front of this,” says Soto. “If immigrants saw unions out front leading on more of these issues, it would do a lot to encourage immigrants not to be scared.”

While many immigrant workers are skipping work and plunging into an economic catastrophe because of fears of the raids, immigrant worker rights advocates say that workers involved in organizing are less scared about going to work

“New members or members who stopped coming for a while or who aren’t as consistently involved are the ones who at this moment are feeling the most terrorized,” says Aguilar of the Congress of Day Laborers. “We’ve got to push them to move forward.”