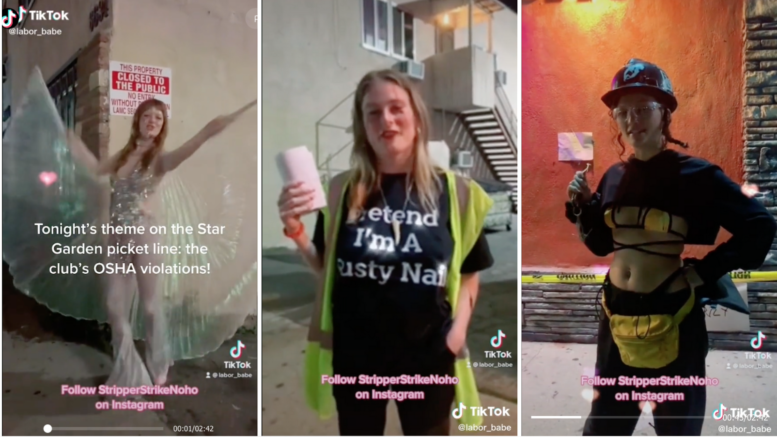 Strippers dress as the OSHA violations at their club

Greetings from the Burgh, where it’s a beautiful 60 degrees outside.

With retail workers at Starbucks and Verizon beginning to organize in larger numbers, the next target may be Apple retail workers.

Apple workers, associated with SEIU’s Workers United, have already begun organizing in New York City. Now, a group backed by CWA has filed for the first union election at an Apple store in Atlanta with more than 70% of the 100-person workforce signing up. If the union drive is successful, it would mark the first time that an Apple store in the US has unionized.

“A number of us have been here for many years, and we don’t think you stick at a place unless you love it. Apple is a profoundly positive place to work, but we know that the company can better live up to their ideals and so we’re excited to be joining together with our coworkers to bring Apple to the negotiating table and make this an even better place to work,” said Derrick Bowles, Apple Genius worker in a statement.

In LA, Strippers Locked Out After Organizing

In Los Angeles, strippers at Star Garden in North Hollywood have been locked out after demanding that something be done about safety.

“I’ve seen girls get fired for literally no reason, mainly girls feeling unsafe, which is the common dialogue at this club. Girls have been getting fired for standing up for their safety,” one stripper told Star Garden.

For more, check out KnockLA

Painters in Kansas City, on strike for the past week, have won wage increases of  2.5% to 3%. It is their largest increase in 17 years.

“When workers fight together, they can achieve their goals,” said their union spokesperson  Jessica Podhola in a statement. “[D]irect action works. We also wouldn’t have achieved this contract without the solidarity from other trades and their commitment to their brothers and sisters in the IUPAT. We can’t say thank you enough.”

Wall Street Backs Away as Starbucks Union Battle Gets Expensive

Today, Starbucks’ flagship roastery in Seattle has officially voted to unionize. It is a further sign of the changes coming to the company.

As nearly 250 Starbucks locations have moved to unionize, Starbucks stock is tanking as Wall Street backs off. Both Wedbush and Citi Research have downgraded their stock to neutral citing the labor organizing and other firms may follow.

“It’s hard to avoid the reality of the situation – that addressable problems in the near term are probably much more expensive and time consuming to bear results,” JP Morgan analyst John Ivankoe wrote in a note to clients on April 11.

Donate to help us keep the Strike Tracker going.

Be the first to comment on "Strippers Dress as OSHA Violations – CWA vs. SEIU on Organizing Apple Retail Workers – Starbucks Stock Plummets  "