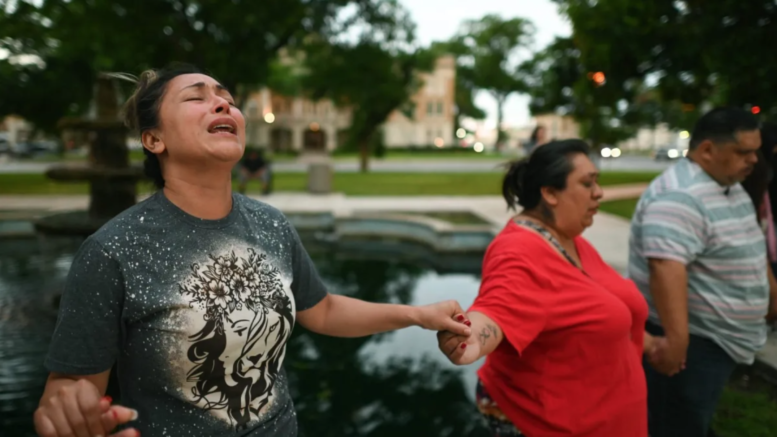 Kladys Castellón prays during a vigil for the victims of a mass shooting at Robb Elementary School in Uvalde, Texas, on Tuesday, May 24, 2022. (Billy Calzada/The San Antonio Express-News via AP)

Greetings from the Burgh, where I am recovering from strep throat, but I wanted to bring you a quick update on what unions are doing to fight back against gun violence.

Many unions were quick to denounce the shooting in Uvalde, Texas this week that killed 21.

“Gun violence is cancer, and it’s one that none of us should tolerate for one single moment longer,” said AFT President Randi Weingarten, whose union has lost many members to gun violence. “We have made a choice to let this continue, and we can make a choice to finally do something—do anything—to put a stop to this madness.”

With outrage over the latest school shooting, many teachers, activists, and parents took to Twitter to call for strikes in support of gun control.

“It’s time for a general strike, by parents & teachers across the country demanding change,” wrote Emmy-nominated filmmaker Moni Vargas on Twitter. “Keep your kids home, call in sick & write to your representatives. We need collective action!”

In April, after an incident where a high school student was shot, Erie teachers refused to return to the classroom until gun issues were addressed.

Erie Education Association Vice President Matt Beiter tells the Erie Times-News why it was important for the union to take a stand:

With lights off, we sat in the back of my classroom illuminated by the lights of our phones as we attempted to find out what was happening. Once we knew that this was not a drill, that there truly had been shots fired, I was shocked at how unsurprised my students were. I even had a conversation with one who said, ‘You know, this is not the first time this week students brought guns to school.” I asked the student, “Why wouldn’t you let me know?” He stated that “he has to live in this neighborhood,” which I understand.

But it really struck me. As teachers, we are all taught Maslow’s needs hierarchy. In clean comfortable rooms, we draw pyramids and hear psychology professors talk about how “children cannot think about higher-level things like math and grammar if their base needs are not met.” The very bottom of that pyramid is safety and security. When we have some students still wearing masks from a pandemic, all locked in a room, waiting out a school shooting, our children feel neither safe nor secure.

One of the questions I was asked immediately after the shooting was who I blame. I think this is one of the easy ones. I blame myself. I have been a teacher in this school for 20-plus years. I am a union representative who has been on the safety committee for more than a year. It was my job to keep our students and staff safe, and I failed.

Read the full op-ed at the Erie Times-News

Earlier this year, teachers in Anacostia, a neighborhood in Washington, DC went on strike following a shooting at that school in January.

“We know our kids deserve better. We know we deserve better. But knowing that we don’t really know what better really looks like right now is one of the biggest things weighing over all of us,” geometry teacher Chris Whigham told NBC Washington earlier this year.

For more, check out NBC Washington

With educators striking in record numbers over COVID safety issues, it will be interesting to see how teachers nationwide respond to the latest uptick in gun violence.

Help Us Cover How Unions Are Fighting Back Against Guns

The topic of gun control has often been controversial within the labor movement. However, this conversation is changing, and Payday wants to help.

Donate to help us cover how union activists are fighting back against guns. And please if you can, sign up as one of our 689 recurring donors today.

Keep us informed of how local labor activists are responding to gun violence. Email me at [email protected]

Alright, that’s it for today as I am very sick. Thanks again for all of the support.

Be the first to comment on "Strikes Over Gun Control? – Erie & DC Teachers Went on Strike over Gun Control – Weingarten Calls for Action"