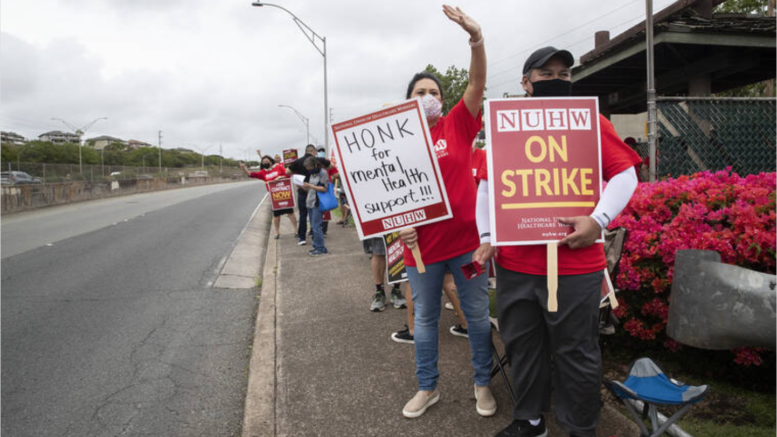 Greetings from Pittsburgh, where Payday is getting back in action after taking a day off covering the close congressional race.

Donate to help us defray the costs of covering this crucial race.

In Hawaii, mental health therapists are on strike to protest chronic understaffing.

“This strike is about patient care,” Daniel Meier, a psychologist at Kaiser’s Ala Moana Clinic in Honolulu, said in a press release. “We’ve hit a crisis point where we’re being forced to tell people with serious mental health conditions that they’ll have to wait months for their next appointment. Kaiser has gotten away for years with underfunding mental healthcare and we’re taking action to put an end to that.”

For more, check out the Honolulu Star-Advertiser

Throughout the war in Ukraine, app workers have continued their deliveries. Last week, workers employed by Bolt protested at the company’s headquarters in Lviv.

“I don’t have a place to live here and I don’t even have enough money to eat,” said a worker in a video released by the Ukrainian Labor Initiative.  “Bolt … said they would support favorable conditions. Both for themselves and for couriers. But they simply did not warn anyone, removed the minimum pay, lowered all the ratios.”

For more on the protest, check out the Solidarity Center

With union organizing heating up at Amazon, the company is retaliating. VICE has a shocking story of one such instance:

“Approved for 10 hours parking lot clean-up,” an Amazon job accommodation report for Mercer says. Mercer, who is pregnant and at the end of her second trimester, said her manager gave her a trash bag and sent her outside without water or sunscreen on May 11, as the heat climbed into the 80s.

On the same day, Amazon also suspended her partner, Jason Main, another vocal union organizer. It later terminated him for not using a step stool to move totes full of merchandise, Main said.

For more, check out VICE

Finally, in LA, striking strippers have moved to become the first in the country to unionize since workers at the Lusty Lady joined SEIU Local 790 in 1997.

“I think the reason why sex workers and strippers haven’t been able to organize is because of stigma,” a dancer known as Velveeta told Knock LA. “It’s hard to organize with a very changeable group. It’s a turnover because of the lack of protection.”

For more, check out Knock LA

That’s all for today folks. Donate to help us keep covering labor in news deserts. Please, if you can, sign up as one of our 689 recurring donors today.