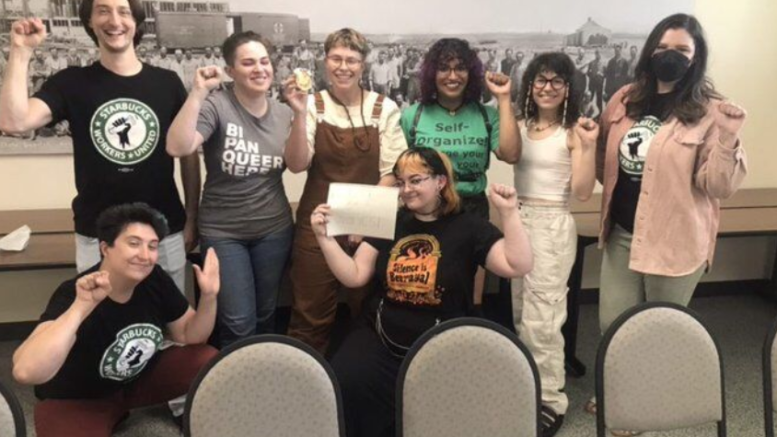 Greetings from Burgh, where it’s been a rough day of commuting without my bike. Donate to help us buy a new bike to replace the one that was stolen.

Also, you can help our cash flow by signing up as one of our 702 recurring donors today.

As abortion rights were stripped from tens of millions of Americans, dozens of major companies have offered female employees travel and financial support for abortions in states where it is still legal.

Clothing retailer Patagonia is taking this advocacy one step further, offering to bail out employees that are arrested in abortion rights protests.

“Caring for employees extends beyond basic health insurance, so we take a more holistic approach to coverage and support overall wellness to which every human has a right,” the company said in a statement.

While Starbucks publicly boasted that they would cover travel costs for employees seeking abortions out-of-state, they hinted that they may not cover those costs for workers seeking to unionize. This follows Starbucks earlier this month threatening that gender-affirming transition care may not be available to unionizing employees.

“Starbucks says that it will cover abortion travel but threatens not to for union workers,” tweeted Starbucks union leader Richard Bensinger. “Every single human right is undermined by Starbucks’ toxic and twisted union-busting.”

At the same time, workers went on strike at ten Starbucks locations across the country in an impressive show of solidarity.

Over 400 workers in ​​Planned Parenthood North Central States’ 28 facilities in Minnesota, Iowa, North Dakota, South Dakota, and Nebraska are voting on whether to unionize this month.

Both South and North Dakota have legislation that will ban abortion beginning this month. Iowa is also expected to quickly pass a ban on abortion, making this union election critical for many frontline workers.

“Our right to provide this care is constantly under attack, and we can’t afford to lose dedicated, mission-driven abortion care providers to burnout and exhaustion,” Sadie Brewer, a registered nurse in Minnesota said in a press statement. “Now more than ever, we need as much protection and security as possible, and a union is going to give us that.”

For more, check out the St. Paul Union Advocate

With the repeal of Roe vs. Wade, unions have a crucial role to play in fighting for abortion rights both in the workplace and in the legal system. Payday Report hopes to cover what unions are doing to fight back.

Donate to help us cover the fight for abortion rights. Please if you can, sign up as one of our 672 recurring donors today.

Over the Juneteeth holiday weekend, workers at New Jersey transit called off at three times the normal rate to protest the lack of overtime for working on the federal holiday of Juneteeth.

While the fourteen unions that previously settled contract disputes with New Jersey Transit received overtime for working on the holiday, the Brotherhood of Locomotive Engineers and Trainmen (BLET), which has yet to settle a union contract, did not receive overtime pay. BLET President James Brown then wrote to workers that despite not having time off, workers should not “let that deter you from celebrating the holiday.”

New Jersey Transit is now asking a federal judge to order the union to repay the transit authority for revenue lost doing the shut downs.

Alright folks, that’s all for today. Donate to help us cover the cost of a new bike. Help our cash flow by signing up as one of our 702 recurring donors.

Keep sending tips, story ideas, comments, and complaints to [email protected]. Thanks again for all the support and suggestions.